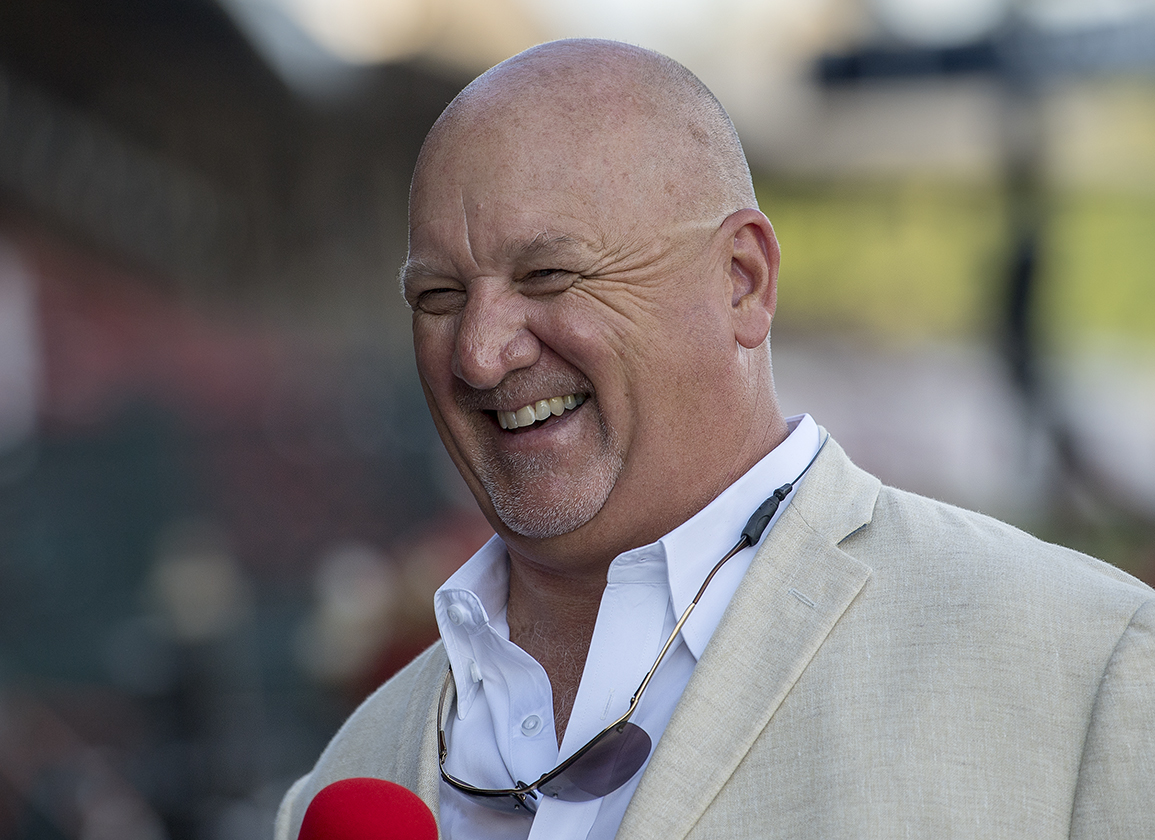 Housing as many as three GI Kentucky Derby starters in his barn, trainer Kenny McPeek joined the TDN Writers' Room presented by Keeneland as the Green Group Guest of the Week Tuesday to discuss Tiz the Bomb (Hit It a Bomb)'s dirt prospects and potential summer European campaign, his plan for likely GI Toyota Blue Grass S. favorite Smile Happy (Runhappy) to run in all three Triple Crown races, his thoughts on the continuing phase-out of Lasix in American racing and more.

Tiz the Bomb, a dual stakes winner and GI Breeders' Cup Juvenile turf runner-up at two, bounced back from a seventh-place run in Gulfstream's GIII Holy Bull S. to sweep a pair of synthetic-track stakes at Turfway, and will head to Louisville after being considered for a start at Newmarket in the Apr. 30 G1 2000 Guineas.

“When we ran him in Florida, the colt didn't handle the Gulfstream surface and the kickback,” McPeek said. “That surface is a little bit different, it's deep, sand-based and he just didn't go for it. I sent him to Turfway to get his confidence back in the [John] Battaglia and that worked out. So the natural next step was the Jeff Ruby and he punched, and ran a super race. I actually felt like he would be a great horse to take over for the 2000 Guineas, and the undulation of Newmarket wasn't any harder or actually could be easier than his victory at Kentucky Downs [in the Kentucky Downs Mile S.]. But due to some logistics and technicalities, he's not going to go, and our next option is either a turf race at Churchill or the Kentucky Derby. I really think at this point, the horse probably deserves a chance.”

As for Smile Happy, a no-doubt Derby contender who will make just his second start as a 3-year-old in Saturday's Blue Grass after a runner-up effort in the GII Risen Star S., McPeek said, “This is a really special colt. I've been sitting on this horse like a keg of dynamite for months now. I didn't want more than two preps going into the Kentucky Derby. I think the [Derby qualifying] points he got in Louisiana will more than likely get him in. I want to see him run well in the Blue Grass, obviously, and being a Lexington boy, it's always fun to win the Blue Grass. I didn't want to over-race this horse this winter. I really sat on him for a reason, because I think he's a horse that can handle the progression of the Derby, Preakness and Belmont. And you've got to have some juice in the tank for those races. If you're already a little tired or you've overdone it going into those three races, obviously your horse is going to be taxed. But he could set up really well for those.”

Elsewhere on the show, which is also sponsored by Coolmore, the Pennsylvania Horse Breeders' Association, XBTV, West Point Thoroughbreds and Legacy Bloodstock, the writers reacted to Secret Oath (Arrogate)'s valiant but losing performance in the GI Arkansas Derby, the beginning of Bob Baffert's 90-day suspension and the latest shenanigans surrounding banned trainer Wayne Potts. Click here to watch the podcast; click here for the audio-only version or find it on Apple Podcasts or Spotify.