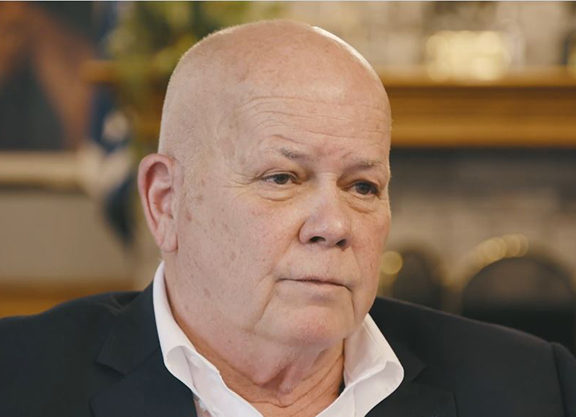 In hindsight, the trust and fidelity that have united Rick Nichols and his patron over the past 35 years were transparently available within the first 35 seconds they had anything to do with each other.

Sheikh Hamdan was then making his first bold incursions into the international bloodstock market; Nichols was in charge of the broodmare division at Spendthrift.

The Sheikh had come back for a second look at Mashteen, a young mare entered for the 1981 Keeneland November Sale. She was a graded stakes winner by Majestic Prince, but it was precisely such ruthless culling that had made Spendthrift's broodmare band what it was.

“If they had two bad foals, they were gone,” Nichols recalls. “That was the case with Mashteen. Sheikh Hamdan came to look at her. The first time, he didn't say anything. When he came back I said, 'Sir, this mare has had two bad foals. It might be good if you looked elsewhere.' He just looked at me and said, 'Well thank you.'”

The Sheikh gave $1 million for the mare.

“That was when Nelson Bunker Hunt was trying to corner the silver market,” says Nichols. “At the price of silver, she was worth her weight in silver that day.”

When Nichols was hired to supervise Shadwell's new Kentucky division, soon afterwards, Mashteen delivered a filly by Blushing Groom (Fr). “And she was crooked,” he recalls. “When he came to see her, the Sheikh looked at her and said, 'I guess I should have heeded your advice.'”

“She went on and produced a filly that won him I think a Grade II and two Grade IIIs,” he says. “So yeah, we were both right.”

Nichols's recruitment had been handled by Shadwell's European managers, and it was only after he had come aboard that he was asked to Royal Ascot to be reintroduced to his new boss.

“I go over there, get all dressed up,” he says. “Back then they had a little house by the walking ring. I go and sit down and talk to him for a while. Sheikh Maktoum comes in, sits down, we talk a little bit. Then all the other Arabs, and English managers and trainers, and everybody started flowing in. And I just kind of sat back, trying to take in this new world I just got thrown into.”

At the end of the afternoon Sheikh Maktoum said to his brother, in their own language, “Your American is very quiet.” And that autumn he asked his own manager to reserve a specific name for his best weanling.

“A couple of years later we were at Newmarket, and a [bay] colt goes up the track in Sheikh Maktoum's colours,” Nichols recalls. “The boss is looking at him through his binoculars. He said, 'Do you know what that horse's name is? Quiet American. He's named after you.'”

So Nichols is guaranteed a lasting imprint on the Stud Book, through the sire of Real Quiet and grandsire of Midnight Lute. But that laconic demeanour of his, underpinned by a depth of experience that requires no superficial demonstration, is matched in the unobtrusive foundations he has laid for a litany of Shadwell champions either side of the Atlantic.

There had been little obvious induction in Nichols's Texas upbringing. True, the kind of resources he did usefully inherit can be gleaned from the fact that his father, a construction manager, was self-taught in engineering and architecture. But there was a distant relative in Kansas who had buckskin horses on a cattle ranch. These so captivated Nichols that when he came home, he secretly bought one for $125. He was just 13 years old.

“I was working, plus going to school,” he remembers. “I'd always give my mother money to put in the bank for me. Well, that stopped. She kept pushing me, 'Why aren't you giving me money anymore?' Finally, I had to form a partnership with my brother, held off a little while longer. We finally told them the truth. And they embraced it. My mother, first thing she did was subscribe to every horse magazine in the country.”

TDN is proud to partner with the Keeneland Library and the Nunn Center for Oral History at the University of Kentucky Libraries in a very special new collaboration: the Keeneland 'Life's Work' Oral History Project, a series of filmed interviews by TDN columnist Chris McGrath with significant figures in the Thoroughbred industry. To continue reading this installment, click here.