Keeneland's Before the Hammer: 'Wind' a Prevailing Force for Lane's End at November 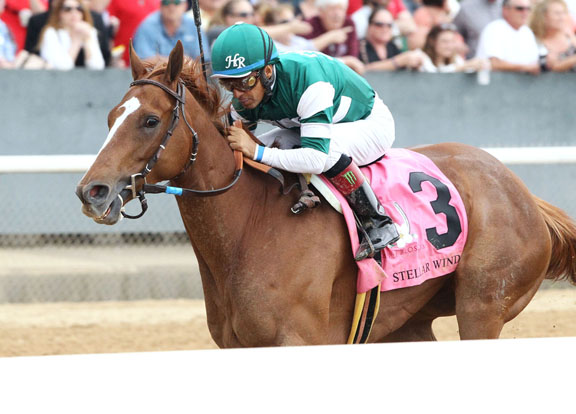 Because the quality of horses on offer at the Keeneland November Breeding Stock Sale is so high, standing out in the crowd is not always easy. For Lane's End, when it comes to consigning Stellar Wind (Curlin) (Hip 153), among others, that will not be an issue.

“She's a collector's item among the sale offerings,” said Allaire Ryan, Lane's End's director of sales. “Throughout her career she's shown athleticism, soundness and honesty, and those intangibles are everything anyone could want in a broodmare prospect, on top of a proven pedigree.”

By leading sire Curlin, Stellar Wind is out of the winning Malibu Moon mare Evening Star and hails from the same family as additional Grade I winners Mor Spirit and Great Hunter.

Stellar Wind has lived up to her name throughout her career, and she seemingly only gets better as she ages. To date, she has won 10 of 15 career starts, nine of which have come in graded stakes company, and six of which have been in Grade I stakes.

In 2015, Stellar Wind won the Eclipse Award for champion 3-year-old filly after posting four graded stakes victories and finishing just a neck behind Stopchargingmaria (Tale of the Cat) in the GI Breeders' Cup Distaff.

Last year, Stellar Wind took on multiple champion Beholder (Henny Hughes) on several occasions and bested her twice, in the GI Clement L. Hirsch Stakes and the GI Zenyatta Stakes. Although she was consigned to the November sale, her connections decided to race her another year, and she has amply rewarded them.

GI Apple Blossom S. at Oaklawn Park, and then she returned to California to win the GI Beholder Mile Stakes and repeat in the Clement L. Hirsch. With her earnings standing at more than

$2.2 million, she is undefeated this year and will take her third shot at the Breeders' Cup in November.

“From a marketing standpoint, Stellar Wind speaks for herself,” said Ryan. “Her owner and trainer deserve the upmost respect for their care and management. She's beloved by all, and Lane's End is proud to be a small part of her story in her transition from the racetrack.”

Although she is 5 years old, Stellar Wind is consigned as a racing or broodmare prospect for potentially intriguing reason.

“There's a unique possibility that her career could continue through January 2018, if she were to run in the $16 million,

Of course, Lane's End will have plenty of quality horses on offer, and another one of its highlights is also tied to Curlin. Offered as Hip 26, Calamity Kate (Yes It's True) is out of the Tiznow mare Justmeandmyshadow, who in turn is a half-sister to Grade I winner and sire Officer. She is carrying her first foal after being bred on an early cover to Curlin.

“Calamity Kate is a testament to K & G Stables' highly successful breeding and racing program,” said Ryan. “She showed early, consistent talent on the track for Kelly Breen while competing in multiple graded stakes as a 2 and 3-year-old.”

On the track, Calamity Kate finished second in GII Demoiselle S. to end her juvenile campaign. The following year, she notched the biggest victory of her career in the GIII Delaware Oaks before running a game second in the GI Cotillion S.

“Calamity Kate comes to the sale as a graded stakes-winning maiden in foal to the two-time Horse of the Year and classic-producing sire Curlin,” said Ryan. “Naturally she should generate a high level of interest leading up to the sale.”

Lane's End is certainly not new to consigning top-class horses to the November sale. Last year, it was the leading overall consignor by gross with $26 million to its credit, while the next closest consigner finished at $22.4 million. It was the third time the operation has achieved such a feat.

On its way to that figure, Lane's End consigned three seven-figure mares, led by Grade I winner My Conquestadory (Artie Schiller), offered as part of the Conquest Stables dispersal, who hammered down for $1.5 million. She's Not Here (Street Cry {Ire}) followed close behind at $1.3 million, and Uptown Twirl (Twirling Candy) went for $1.075 million.

Consigning the overall sale topper is also one of Lane's End's multiple achievements. It has succeeded in that arena several times, most recently with Awesome Maria (Maria's Mon) who brought $4 million in 2013. While competition for this year's title will be fierce, it is easy to believe Stellar Wind will be in the mix.

“November is an ideal placement for Stellar Wind as a sale prospect,” said Ryan. “It's on the heels of the Breeders' Cup, and Lexington is the international stage for buyers and sellers of breeding stock at this time. She's at the forefront of the offerings this sale attracts.”