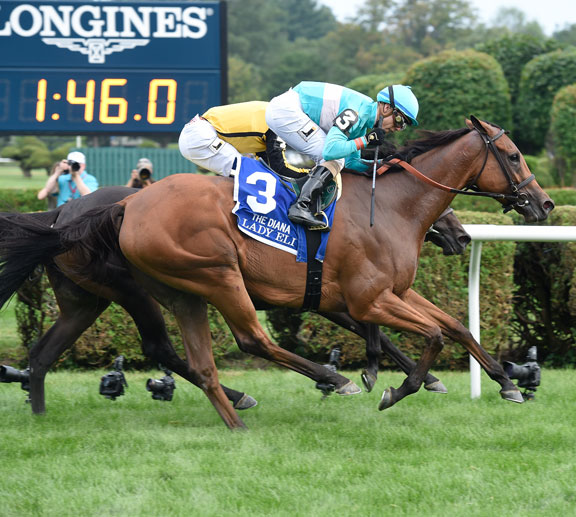 Before the Hammer is a series presented by Keeneland that spotlights consignors, their stories of success and their featured offerings at the upcoming Keeneland November Breeding Stock Sale from Nov. 5 to 16.

John G. Sikura, the president of Hill 'n' Dale Sales, is content to be a man of few words regarding his 103-horse consignment at the Keeneland November Breeding Stock Sale.

With standouts like in-foal champion Lady Eli (Divine Park), who sells as hip 111, and weanling half-sisters to 2016 Longines World's Best Racehorse Arrogate (Unbridled's Song) and 2015 older male Eclipse Award winner Honor Code (A.P. Indy) among Hill 'n' Dale's 19 Book 1 prospects, you can see why Sikura would prefer to let the horses do the talking for him.

“Certainly Lady Eli is a classic and unique offering,” Sikura said. “She's the headliner of our consignment at Keeneland. She's a household name, a champion, and a mare of immense class.”

Lady Eli's story will always be emotionally compelling considering she started her career 6-for-6 with wins in the 2014 GI Breeders' Cup Juvenile Fillies Turf and the 2015 GI Belmont Oaks before stepping on a nail and was away from racing for over a year in 2015-16 before regaining top form with three additional Grade I wins in 2016-17.

The adversity-overcoming turf distance specialist was never worse than second in her career until a trip-troubled 2017 GI Breeders' Cup Filly and Mare Turf, when she was banged around and stepped on from behind while battling into the first turn, contributing to a seventh-place finish in what was to be her lifetime finale.

After that race, it was revealed she lost a hind shoe and suffered significant lacerations and puncture wounds to both hind legs.

“She's international in scope and in foal to War Front,' Sikura said. “He led the September sale in yearling average, and he's a fantastic, internationally respected sire. Lady Eli is very special, and we're honored to present her.”

Hill 'n' Dale traditionally has a strong weanling presence at Keeneland November and 2018 will be no different, with 14 of them placed in Book 1.

“We sell a half sister to Arrogate (hip 28),” Sikura said. “She's sired by Tapit–a supremely unique offering. We also sell a Curlin filly, a half to champion Honor Code-(Hip 188) another unique offering.”

Arrogate finished third in his 2016 debut, then the racing world ran out of superlatives trying to describe his upward career arc as he ripped through seven consecutive wins, including a track-record victory in the GI Travers S. followed by sizzling scores in the GI Breeders' Cup Classic, GI Pegasus World Cup, and GI Dubai World Cup.

Honor Code was off the board only once while winning six of 11 lifetime starts, capturing graded races at ages two and four. His Grade I wins were the Metropolitan H. and Whitney S., both in 2015. That same year, a War Front-sired weanling half-brother to Honor Code that Hill 'n' Dale consigned to Keeneland November sold for $2.6 million.

Overall, Sikura said, “We have a very strong consignment. We sell mares by Galileo. Multiple mares in foal to Curlin. Group 1 quality fillies. A great array of weanlings by War Front, Curlin and others. So I'm very happy about our consignment and I think it's a special group of horses.”

When asked to gauge the temperature of the current marketplace, Sikura said the heat of the economy in general is being reflected in the results of recent auctions.

“We're dealing–at least for the moment–with a North American economy that's very robust,” Sikura said. “The tax changes have been very beneficial to our industry. I think that's helping to drive money into the marketplace, and because of depreciation and tax advantages, it can't be overstated how significant those law changes have been. When you're in a speculative, high-risk business and essentially you're protected with tax law changes that enable you to write off expenses and losses, it makes the venture [less risky], and that's something that everybody is looking to do.”

Sikura continued: “The September sale was up double digits. Buyers have a high threshold of scrutiny for the physical horse. Does the horse vet? Does it meet all of the checklists? And if they do, there's plenty of money-more money in this market here than there has been in several of the past [years].

Sikura summed up: “Multiple buyers target a few horses, and if you're fortunate enough to have one of those, you're rewarded. We feel that we have several of those kinds of individuals this year-by the right sire, out of the right mare, and they look the part and meet that very stringent marketplace criteria.”