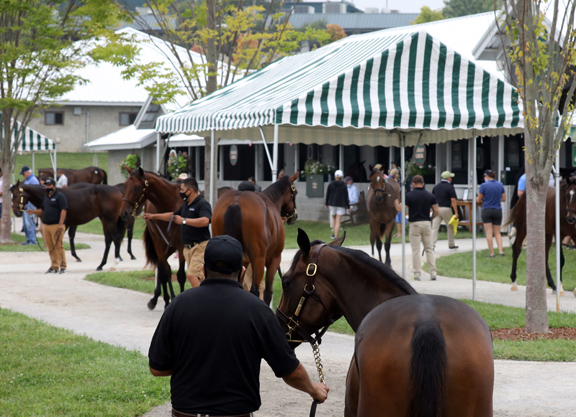 LEXINGTON, KY – While the coronavirus pandemic wreaked havoc with sales across the globe from March through August, the calendar will return to some semblance of normalcy when the Keeneland September Yearling Sale kicks off right on schedule in Lexington Sunday at noon.

“So many sales companies in the Northern Hemisphere have had to rearrange some things, but we have been very fortunate that the September sale is taking place in September at Keeneland,” said Keeneland's Director of Sales Operations Geoffrey Russell.

Making sure the mammoth yearling auction would be able to go on as scheduled has been a months-long project for the sales company.

“We started talking in March and we called the meetings 'What ifs,'” Russell said. “Everything was changing all the way to August. It's been such a movable thing, it's been an unbelievable experience.”

Those meetings included discussions with consignors about ways to alleviate congestion at the sales barns and those conversations seemed to bear fruit with action steady but not overwhelming on the grounds in the two days leading up to Sunday's first of two Book 1 sessions.

“We've had an increased number of farm visits prior to the sale and the breeders have embraced that,” Russell said. “I think that has worked really well and will help because we were very concerned about social distancing and everybody showing up on the grounds at the same time and wanting to look at the same horses. So if farm visits could somehow alleviate the first looks, we thought that would make it a little easier [at the sales barns]. I spent the morning at the barns and it's been business as usual. People have been very courteous to each other. There doesn't seem to be people on top of one another. We've spaced out the consignments and we've encouraged buyers to think out of the box and not all start at barn 1 and go to barn 2 and 3. They can start at barn 19 and go down. Reservations at certain consignments have worked as well. I think we've learned things out of this that might become part of the industry in the future.”

Keeneland's sale pavilion, traditionally a busy hive of activity–both commercial and social–on sales days, will be limited to 40% capacity throughout the two-week auction and buyers will be asked to sit in the pavilion only while actively bidding on a horse. To compensate, Keeneland has expanded its outdoor bidding options.

Food service has been moved from the pavilion to the track up the hill.

“All of the food is up in the first floor of the grandstand and we have laid out the saddling paddocks with tables and chairs so people can sit up there, too,” Russell said. “Televisions will be on everywhere, so they can watch the sale up there.”

Keeneland was part of group of industry stakeholders lobbying  U.S. government officials to allow foreign buyers to attend the sale, despite a travel ban on people traveling from several countries. While it was announced Friday that the ban will end Monday, bloodstock agents like Kerri Radcliffe, direct from last week's Arqana sale, were on the grounds Saturday morning after receiving waivers to enter the country.

“There was a presidential travel ban on people coming from Europe, from England and Ireland where a lot of buyers come from, so we worked closely with Senator [Mitch] McConnell's office and Congressman [Andy] Barr's office and Ambassador [Kelly] Craft, we've called on all of our friends to try to help us,” Arvin said. “There was an exemption to the travel ban, so we were able to get a waiver for quite a few of those people. The travel ban will be lifted on the 14th, but they wanted to be here this week, so we are happy they could get here.”

Radcliffe said she had received confirmation of her waiver Wednesday night and made last-minute flight arrangements to make it to Lexington Saturday morning.

With no travel ban in place for buyers coming from Asia, Russell is expecting to see entities from those country shopping at Keeneland in the coming days.

“The Koreans and Japanese don't have an issue coming into our country, the issue might be when they go back to their country,” Russell explained. “The Koreans usually come for the second week, so I haven't heard about them yet. But we have three Japanese groups here. We have a group of Russians planning on coming. And now that our borders are back open again, we might get some more people the second week.”

Sheikh Mohammed's Godolphin operation was the leading buyer at last year's September sale, purchasing 10 lots for $16 million, while his brother Sheikh Hamdan purchased 18 yearlings for $11,070,000 for his Shadwell Estate Company to be second leading buyer. While both were in attendance at the sale a year ago, neither are expected to attend this year.

Fasig-Tipton, forced to cancel its boutique Saratoga Yearlings Sale, as well as its New York-bred Yearling Sale and July Select Yearling Sales, combined all three auctions into a Select Yearling Showcase which was held last Wednesday and Thursday. Given all the uncertain conditions, the two-day auction proved successful and consignors are hoping that trend continues on at Keeneland this coming week.

“Hopefully Fasig has built some momentum, which I think it has, and that will carry over to Keeneland,” said Claiborne Farm's Walker Hancock. “The same story goes, quality is going to sell and, if you've got a horse who doesn't tick all the boxes, as they say, you're not going to get the money you'd want for it.”

The Fasig results sheets were dominated by domestic buyers and the Keeneland sale could be impacted by a weakened foreign buying bench.

“I'd say Books 1 and 2 won't be affected so much because they are going to find the good horses,” Hancock said of the dearth of foreign buyers. “It's the horses in Book 3 and 4 that some of the European pinhookers will take to the breeze-up sales we are really going to miss. They support those kind of horses and give you a few extra bids, so a horse that normally sells for $75,000 may only sell for $50,000 this year. I think everyone maybe has to lower their expectations just a hair and I think everyone has, given the current market circumstances. I think we will see good trade for the first two books and after that it will likely fall off. That's to be expected.”

Kerry Cauthen of Four Star Sales agreed demand will remain high for the top offerings, but he expects a bumpy ride as the market continues to struggle to find its footing under uncertain conditions.

“I think you are going to continue to see a bit of a bouncy sale, but where it is good, it is going to be very good,” Cauthen said. “We saw across town [at Fasig-Tipton], when you have quality horses, the market is going to reward you. But any marketplace, when it is working towards a recovery, it is not a nice smooth line. It is bouncy. And I think we will see plenty of that. There are going to be places where you think, 'Wait, I've got this great horse that fits well, is well and somebody should own at a fair price–not being greedy, just a fair price–and you're going to be disappointed. And then you're going to have other places where your expectations are more than satisfied. I think the top of the market is going to be strong to very strong and everything else is going to be the water finding its level.”

Doug Arnold of Buck Pond Farm sees plenty of reason for optimism ahead of the September sale.

“I think it just seemed like if you had a nice horse [at Fasig-Tipton], you could get it sold,” Arnold said. “It seemed like there were plenty of buyers. And it looks like there are more people here at Keeneland. So I think it will be good, provided that you have the right kind of horses. You have to have something that they want. If you don't have something that they want, there is really not anybody to catch you when you fall.”

Arnold sees all the uncertainties, not as a liability, but as opportunities for buyers who are willing to think outside the box.

“There are so many opportunities out here for people who maybe haven't been in the business or who are coming back,” Arnold said. “It is so polarized with everybody using bloodstock agents who pretty much know what they want and what they don't want, I think there are lots and lots of opportunities for a guy to buy a really good horse. Probably better than there ever has been. You see there is plenty of money out there to buy horses. We just need to expand the base a little bit and advertise that there is a lot of opportunity. When you have hard and fast rules, people miss lots of things. It's something you're seeing more and more with a horse who didn't bring much money at a sale and he ends up being a really top-notch horse on the racetrack.”

Domestic buyers like Joe Allen, Speedway Stables and the SF/Starlight/Madaket partnership stepped up with several major purchases at the Fasig Showcase and Hancock looks for that trend to continue at Keeneland.

“I think people realize it's a buyers market,” he said. “This is a good year to maybe buy a few more.”

With all the canceled and rescheduled auctions of the spring in the rearview mirror, consignors are just thankful to have the September sale, a traditional bellwether auction in the industry, going off as scheduled.

“As we were putting these sales together in April, May and June, the level of concern that we all had about this was incredible,” Cauthen said. “That we have a sale, that we have a marketplace, is amazing.”

The September sale opens with two boutique Book 1 sessions, with bidding beginning Sunday and Monday at noon for hips one through 448. Following a dark day Tuesday, the auction resumes at 10 a.m. Wednesday and continues through Sept. 25.