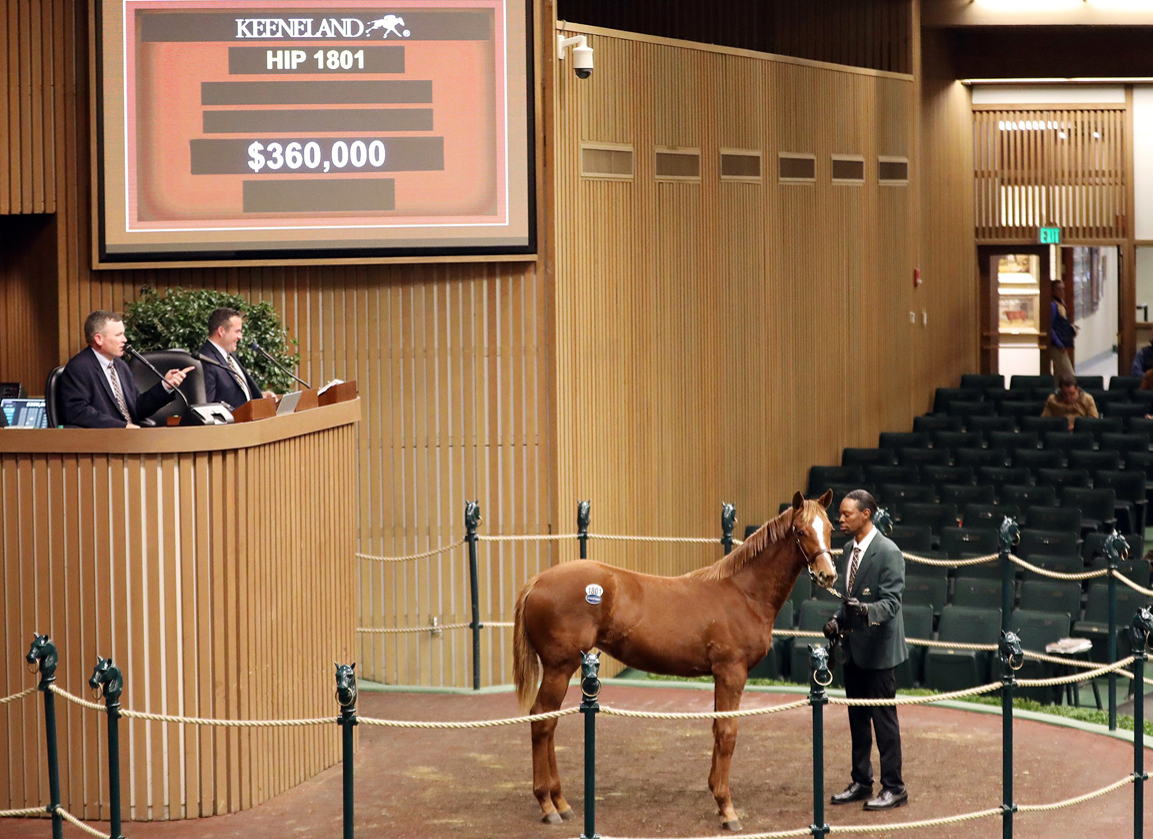 Katie Cauthen, bidding on behalf of Susan Casner, purchased Sunday's top-priced lot when going to $360,000 to secure a filly by first-crop sire Audible. The session topper capped a big day for young stallions. The day's second-highest priced weanling was a son of first-crop sire Mitole who sold for $285,000 to Corinne and Bill Heiligbrodt and Spendthrift Farm and the day's top-priced mare, Super Simple (Super Saver), sold for $300,000 to Woodford Thoroughbreds while carrying a foal from the first crop of Grade I winner Volatile.

As the Keeneland November sale concluded its fifth session Sunday, Simms continued to see plenty of demand for horses.

“We sold three mares earlier in the day that were very strong and were probably double what we expected,” Simms said. “I didn't think [Super Simple] would be at $300,000, but the market is strong. If you bring something up here, you will get paid for it.”
John Mulholland, whose Mulholland Springs consigned the day's highest-priced colt by Mitole, agreed the November results continued to exceed all expecations.

“When they stand out, they stand out,” Mulholland said. “If they love it, people are going to dig deep and go for it. That's what the market wants. It wants the highest of the high quality and that's what everybody is going to zero in on and you're going to end up getting more than you expect.”

As Sunday's session of the Keeneland November sale was winding down, Katie Cauthen, acting on behalf of Bill and Susan Casner, made the day's highest bid when going to $360,000 to acquire a filly by Audible (hip 1801). Bred by Fred Hertrich, III and consigned by Taylor Made Sales Agency, the chestnut filly received a timely update when her half-sister Juju's Map (Liam's Map) won the Oct. 8 GI Darley Alcibiades S. and was second in last weekend's GI Breeders' Cup Juvenile Fillies.

“She was a lovely filly,” Cauthen said after signing the ticket on the weanling. “We liked the physical and we really liked the update. Bill Casner really loved her walking video. He's trusted us for a long time and we are glad to have her.”

“Bill just wants to get back in the game,” Cauthen said. “He's been sitting on the sidelines for a while. He's really excited to be back.”
Of the filly's session-topping price, Cauthen admitted, “We wanted her for around $300,000, but it seems like you have to pay a lot more than you expect to.”

Sarah and Leo Dooley's Norevale Farm, still just in its first full year in operation, picked up Super Simple (Super Saver) (hip 1502) for $27,000 at last year's Keeneland November sale and hit a home run when returning the 5-year-old mare to the Keeneland sales ring Sunday to sell for $300,000 to Woodford Thoroughbreds.

“She had a lot of upside,” she said. “My dad has operated that way his whole career, just buying mares with plenty of upside. There were Gun Runners, a Pharaoh filly, all Winchell [in the pedigree], so we thought if she could be bought right, she's a pretty mare and had enough of a page that we could hope something would pop there.”

“If something popped up, we could resell, if it didn't, we could keep her,” Sarah Dooley said when asked if the plan had always been to sell the mare this year. “We bought her with both options in mind. And sure enough the American Pharoah is now stakes placed and there is Gunite, and the 2-year-old just broke her maiden. So it was time to see how the market would be.”

Leo Dooley, a native of Ireland who worked for trainer Jim Bolger, as well as serving stints at Ballylinch Stud, Tattersalls and Goffs, said the stallion made sense for Super Simple.

“When we went out to look at Volatile, he was very impressive physically,” he said. “He cost so much as a yearling, he was bound to be, but he was a very good physical and he was a good match for the mare.”

Bloodstock agent Lincoln Collins has been busy purchasing mares for John and Susan Sykes's Woodford Thoroughbreds this week at Keeneland as the operation continues to upgrade its commercial broodmare band. Collins, sitting alongside John Sykes, purchased Super Simple (Super Saver) (hip 1502) for $300,000 from the Warrendale Sales consignment Sunday. The mare is a half-sister to the dam of GI Hopeful S. winner Gunite (Gun Runner).

“She is a beautiful mare,” Collins said after signing the ticket on the mare, who sold in foal to Volatile. “Obviously, the family is very live. So that's a big consideration for us. We bought one earlier that we thought was good value and we stretched a bit for her, but you've got to have good-looking mares in order to succeed in the commercial marketplace. Woodford Thoroughbreds is a commercial operation and we've been looking to upgrade. Obviously, we've bought a lot of mares at the sale, but Mr. and Mrs. Sykes are determined to make Woodford a first-class, top-five yearling sellers, and in order to do that, you've got to have good-looking mares.”

Collins returned for another mare in foal to Volatile later Sunday, going to $95,000 for Cedar Hall (Bayern) (hip 1607).

Woodford Thoroughbreds has purchased 14 mares so far at the Keeneland November sale for a total of $3,515,000. In addition to Volatile, the operation has purchased two mares in foal with the first crop of foals by Authentic and McKinzie, and one mare carrying a foal from the first crops of Vekoma and Improbable, as well as two mares in foal with the second crop of Omaha Beach.

“There has been a trend in the last few years that makes it difficult from a commercial point of view to breed to very good proven sires because there seems to be a ceiling for what you can get for a regular one as opposed to a superstar,” Collins said of the purchase of so many mares in foal to young stallions. “Maybe the trend will change, but from a commercial point of view you've got to look at the young horses because people seem to give a lot of money for them. Woodford is in the commercial game and we're trying to buy good-looking mares to get good-looking foals by first-season stallions. That's part of our commercial strategy. Having said that, we have a lot of other good mares who will get bred to proven horses. This is all about, from Woodford's point of view, presenting horses that the market wants. We are all looking a couple years in advance. One out of five are the ones that are going to make you the money. You just have to have the right ones.”

Bill and Corinne Heiligbrodt, who campaigned Mitole, teamed up with Spendthrift Farm, which stands the champion sprinter, to acquire a weanling (hip 1432) from his first crop for $285,000 early in Sunday's session of the Keeneland November sale. The bay colt, bred by R B Stables and consigned by Mulholland Springs, is out of the unraced Rode Warrior (Quality Road), a half-sister to graded winner Wacky Patty (Formal Dinner).

“I thought he was the best Mitole we've seen so far,” Spendthrift's Mark Toothaker said. “He was just an absolutely gorgeous horse. We were so glad to be able to team up with Bill and Corinne Heiligbrodt, who obviously campaigned Mitole. So we are very excited to land this horse. We partnered up and hopefully he'll be a runner.”

The speedy Mitole, a four-time Grade I winner, capped his career with a win in the 2019 GI Breeders' Cup Sprint and was named that year's champion sprinter. He began his stud career at Spendthrift in 2020 and will stand the 2022 season at $15,000.

“A lot of the ones we've seen have been beautiful-bodied horses,” Toothaker said of Mitole's babies. “This one not only had the beautiful body, he also stood over a lot of ground. So we thought he was one we had to have and we took a shot. [Spendthrift owner] Eric [Gustavson] and [manager] Ned [Toffey] signed off and Bill and Corinne were all on board.”

Consignor John Mulholland said he has been impressed by what he has seen of Mitole's first crop of weanlings.

“They have exceeded my expectations,” Mulholland said. “This one is out of a big Quality Road mare. So I think if you breed a big, stretchy kind of mare to him, you're going to get the best of both, from what I've seen.”

Hip 1432 was the second weanling by Mitole to top the $200,000 mark at the Keeneland November sale. He was represented by the second-highest priced weanling of Saturday's session when hip 1214 sold for $200,000 and he has now had 10 six-figure weanlings sell at Keeneland this week. Twenty-two weanlings by Mitole have sold for an average of $95,000.

“He bred a big book of mares his first year and then the babies were so nice, we came back this year and bred over 200 mares again,” Toothaker said. “So Mitole has a huge following. And the way these sales results have been, he's going to have a big following again next year. We couldn't be more excited. He's the mighty Mitole–the fastest horse in the world and we are happy to have one.”