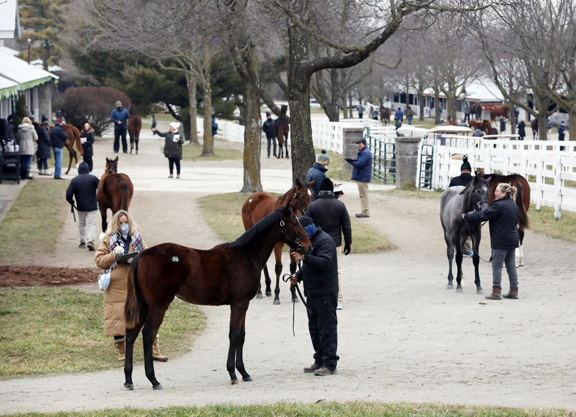 The Keeneland January Horses of All Ages Sale begins its four-day run Monday morning, with bidding slated to commence at 10 a.m. The auction, which includes the dispersals of the historic Sam-Son Farm, the late Paul Pompa, Jr., and Spry Family Farm, features a catalogue of 1,608 broodmares and broodmare prospects, newly turned yearlings, horses of racing age and stallions or stallion prospects.

Despite swirling uncertainties caused by the global pandemic, the market proved resilient and surprisingly deep when Keeneland staged its September Yearling Sale and November Breeding Stock Sale last fall. Sales officials look for those trends continue into the January marketplace.

“I think the November sale was similar to the September market,” said Keeneland's Director of Sales Operations Geoffrey Russell. “In September, we were very apprehensive going into the second week about where we were going to be and it worked out very well. And it was the same in the November sale. We were worried about the middle and lower-end markets and they stood up very well. We hope all that continues on in January.”

The three dispersals in the January catalogue figure to increase interest in the auction.

“I think it will be a slightly different January sale as we've got three very nice dispersals in here,” Russell said. “Obviously, we'd prefer they weren't dispersing, but if they had to, we are glad they are doing it with us.”

The Sam-Son Farm dispersal features 21 in-foal broodmares, all of whom were paraded before prospective buyers Saturday morning at Keeneland.

The dispersal of the late Paul Pompa, which is being handled by the Lane's End consignment, includes 39 broodmares, yearlings, broodmare and stallion prospects and horses of racing age. The dispersal continued to generate updates as sale time approached, with homebred Carillo (Union Rags) tabbed a 'TDN Rising Star' with a debut win at Aqueduct Friday. Both the sophomore (hip 1556) and his dam, Proper Mad (Bernardini) (hip 793), will be offered at Keeneland this week.

“The Sam-Son horses had a nice show this morning and the Pompa horses seem to be doing very well on the racetrack,” said Russell. “So that is all very positive. Quality dispersals, as these are, bring in more people.”

The January sale will be the third auction at which Keeneland will offer buyers the opportunity to bid on-line. It is an option, first necessitated by the coronavirus pandemic and ensuing travel restrictions, which continues to grow in popularity.

“We have the same system set up and we expect it to continue to be very popular,” Keeneland President Shannon Arvin said of the internet bidding. “It opens up a lot of doors.”

Russell added, “I think, of all the things we have done because of COVID, I think the internet bidding is definitely something that is here to stay. I think as each sale has gone on–not just ours, but at other sales companies, as well–I think buyers are getting more comfortable with it.”

The Keeneland January sale continues through Thursday with each session beginning at 10 a.m.