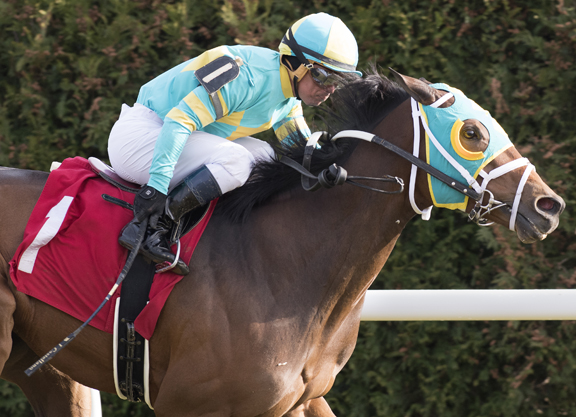 LEXINGTON, KY – The Keeneland January Horses of All Ages Sale concluded its five-day run in Lexington Friday with results off slightly from a record-setting 2019 renewal which was held over four days and featured the breakout $5-million sale of champion Abel Tasmen (Quality Road).

“To me, if you take one horse out of 2019, 2019 and 2020 look remarkably similar,” said Keeneland's vice president of racing and sales Bob Elliston. “Abel Tasman was a $5-million purchase and in excess of 10% of our total gross last year. If you take her out, the numbers will be relatively similar. We are pleased with a solid January sale. It would have been nice to have an Abel Tasman or a dispersal, but those things are not assured when you open the entry box.”

Three of the sale's top-priced lots were late supplemental entries to the auction, including multiple Grade I-placed broodmare prospect Enaya Alrabb (Uncle Mo), who sold for a sale-topping $640,000 to Jim Schenck.

“We were excited about those late offerings, the supplements that we put in,” Elliston said. “We began that last year, but we really kicked it up this year. They were very well-received and that is something that we will continue to strive for. Those really nice ones come to market late sometimes, so that will become part of our tactics going forward.”

Schenck, bidding on behalf of a new ownership group, was the auction's leading buyer with three purchased for $1,480,000. In addition to Enaya Alrabb, he also purchased the mare Confidently (War Front) for $560,000.

“The yearling market is phenomenal,” Keeneland Director of Sales Operations Geoffrey Russell said. “Some consignors now target the January Sale with quality yearlings, which means end users have a better opportunity to purchase nice yearlings. At the same time, pinhookers who didn't fill their orders at the November Sale are here shopping, thus creating a strong market.”

Gainesway's Brian Graves was active buying pinhooking prospects from the yearling ranks and admitted bidding was competitive for the top offerings.

“The competition was immense for the types of foals that you think could be commercially viable later this year,” Graves said. “It was maybe even a bit stronger than November because it just seemed like those type of foals were fewer and farther between. The market is obviously still very polarized because the ones that don't possess that, there is not really a lot of leeway there and they are not easy to sell. But the ones that have commercial appeal, combined with a good physical and some sire power, that vet well, bring a premium.”

The results of the January sale reflected the continued polarized nature of the auction scene, with demand strong at the top before falling off for less-fancied offerings.

Carrie Brogden of Select Sales sees the roots of the market's polarization in stallions' large book sizes and an increasing aversion to risk by both breeders and buyers.

“There is plenty of money for the above average and nothing for the average and below,” Brogden said. “I think a lot of what we're seeing is related to the giant book size. I just feel like there is not enough diversity. We had Klimts–we had some nice ones. But people kept saying to me, 'There are so many of them. I like this one, but there is another one 30 hips later, I might be able to buy that one.'”

Brogden continued, “And people are more risk averse. There are breeders coming over to me and they ask, 'Who should we breed to?' And I say, for example, 'I'm hearing really good things about the Frosteds.' 'Oh, I can't do that, it's a bubble sire. I can't breed anything to a bubble sire.' And I'm hearing that more and more. And the problem is, in years past, when we had horses that were booked to 150 mares, the proven and first years would be booked full and people don't just not breed their mares, they had to take other options. I think that's why we are seeing an exodus of stallions.

“I am a shareholder in Upstart, I loved his yearlings, I have two mares pregnant to him,” Brogden said. “He bred 38 mares this year. How did he breed 38 mares with his yearling average [$63,608]? Because people are terrified.”

In contrast, “Everyone on the planet wants to breed to Constitution now, but by God, last year you couldn't give them away and now he's the hottest thing going,” she said. “My clients that bred to him, I think I did 14 foal shares in him last year, and all those people who have weanlings to sell, they did great, but they didn't have to put out the big bucks. And now I'm finding that's tougher to do already and it's only two years later.”

In the sales ring, that risk aversion causes buyers to pass on those lots below the top level, according to Brogden.

“That Uncle Mo colt who brought $400,000, there were 18 people ready to pay $300,000 for that horse,” she said. “People like me, I would love to buy that horse for $200,000, but he brings double. And if another horse comes behind it and it's a little this or a little that or whatever, people used to take the risk, but now they're not. Today, I bought a Morning Line filly to flip and she's out of a half to a graded stakes winner with a great big pedigree and clean vetting and she was $1,000.

“I don't know what the answer is,” she continued. “I obviously am for book capping. I am for anything that creates more demand and better diversity in our industry.”

Cullum Road (Quality Road) (hip 1809) brought the top price at Friday's final session of the January sale when Dan Kessler of K.C. Garrett Farm signed the ticket at $150,000. Kessler said the plan was to return the 5-year-old gelding to the racetrack, but a trainer was still to be determined. Cullum Road, claimed by Three Diamonds Farm for $62,500 in 2018, was runner-up in the 2019 GIII River City H. and third in the GIII Fort Marcy S. On the board in 12 of 21 starts to date, the bay has won four times and earned $374,458. He was consigned by Bluewater Sales.