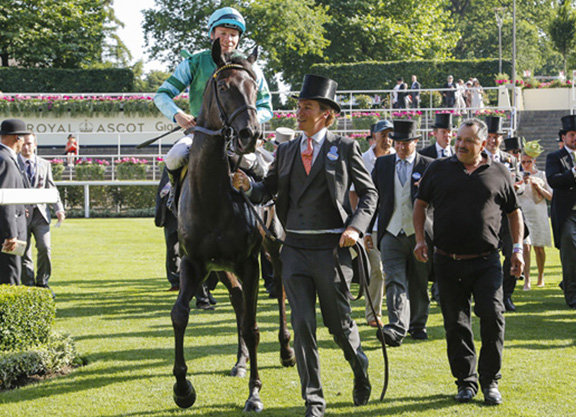 Con Te Partiro (Scat Daddy), a stakes winner on three continents and a dual Group 1 winner in Australia in 2020, will return to the United States for an appearance in the Breeders' Cup before being offered at the Keeneland November Breeding Stock Sale. The 6-year-old will be consigned by Bedouin Bloodstock as a racing/broodmare prospect.

A $130,000 purchase by Gatewood Bell's Cromwell Bloodstock out of the 2015 Keeneland September Sale and trained in America by Wesley Ward, the daughter of Temple Street (Street Cry {Ire}) graduated by 5 1/2 lengths at first asking going 4 1/2 furlongs on the Keeneland main track, then rolled by 5 3/4 lengths when trying the grass for the first time in the Bolton Landing S. at Saratoga two starts later. She was also runner-up against the boys in the Juvenile Turf Sprint before it became a Breeders' Cup event in 2016.

Part of the Ward contingent at Royal Ascot the following spring, Con Te Partiro belied odds of 20-1 in the prestigious Listed Sandringham H., defeating 23 rivals in the process and was placed in the nine-furlong GIII Arlington Matron S. on the Polytrack in 2018 before selling to Newgate Farm and SF Bloodstock for $575,000 at Fasig-Tipton November.

Turned over to the legendary Gai Waterhouse and co-trainer Adrian Bott, Con Te Partiro made a spectacular start to her Australian career, taking the G3 Dark Jewel Classic (1400mT) in May of 2019. She resumed from a five-month spell to upset the field in the G1 Coolmore Classic (1400mT) (video) in heavy ground this past March, added a smooth success in the G1 Coolmore Legacy S. (1600mT) (see below) and was most recently fifth, beaten just 3/4 of a length, behind the classy Verry Elleegant (NZ) (Zed {NZ}). Third home that day was Fierce Impact (Jpn) (Deep Impact {Jpn}), who prevailed in Saturday's G1 Makybe Diva S. at Flemington Racecourse.

“It is remarkable to reflect on what Con Te Partiro has achieved in her racing career,” Waterhouse said. “It is a rare feat in itself to win stakes races on three continents, but it is her performances at the elite level in Australia for which she will be remembered. Con Te Partiro won both of the time-honored Group 1 races, the Coolmore Classic and the Coolmore Legacy, making her, arguably, the best-performed mare in Australia.”

Added SF Bloodstock's Tom Ryan: “Con Te Partiro truly is a one-of-a-kind mare,” said Tom Ryan of SF Bloodstock. “Her accomplishments on the track–including two Grade 1 wins in Australia, stakes victories at both the Royal Ascot and Saratoga race meets and successes on both dirt and turf–put her in an elite category of racehorses with the ability to perform at the highest level around the world.”

Ryan indicated that Con Te Partiro could take on the boys in the GI Breeders' Cup Mile or remain with her own sex for the GI Filly & Mare Turf.

Con Te Partiro, whose Grade I-placed dam has also produced SW & MGSP Donworth (Tiznow), is one of 31 worldwide GI/G1SWs for her late sire and is from the extended family of four-time champion Beholder (Henny Hughes), Grade I winner and 2016 Keeneland September sales-topper Mendelssohn (Scat Daddy) and Grade I winner and leading sire Into Mischief (Harlan's Holiday).

“Con Te Partiro has excelled at the highest level of international racing while she has exemplified just how small the global Thoroughbred industry is,” Keeneland President-Elect and Interim Head of Sales Shannon Arvin said. “We are thrilled to hold a Keeneland homecoming for Con Te Partiro. She sold as a yearling at the September Sale and she began her racing career here during the 2016 Spring Meet. We look forward to presenting her at the November Sale with all the fanfare she deserves.”