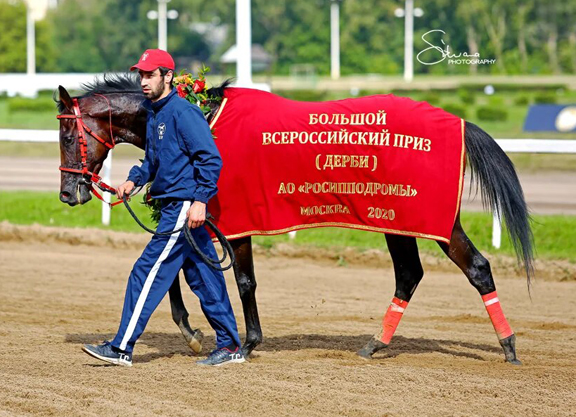 While the marquee horses and seven-figure fireworks are long since in the rear-view mirror when the Keeneland September Sale–the largest of its kind in the world–reaches its later books, there are still horses to be sold, even as the demand for those youngsters could begin to wane. Several years ago, in an effort to drum up interest in the latter stages of the sale, officials at the Lexington auction house began mining smaller, off-the-beaten-path markets, and those efforts have borne fruit in places like Russia, where Lyudovik (Constitution) became the fourth Keeneland graduate since 2014 to prevail in the $55,000 Russian Derby (RUS-G1, 2400m) at the historic Central Moscow Hippodrome last month.

“Dating back to long before I was here, we have made a concerted effort to find owners and trainers in emerging markets to get them to come and buy their Thoroughbreds here at Keeneland,” said Chip McGaughey, son of Hall of Fame trainer Shug McGaughey, who joined Keeneland in 2015 and acts as a liaison to these smaller racing jurisdictions. “Obviously you can see that it’s had dividends with the success we’ve had in certain of those markets.”

Lyudovik, who became his sire’s second winner overall when graduating at first asking in domestic Group 3 company at Moscow last May, was bred by Pope McLean, Marc McLean, Pope McLean, Jr. and Phil Hager and was purchased out of the 2018 September sale for $40,000 by Marc-Antoine Berghracht’s M.A.B. Agency on behalf of his client Edward Mordukovich.

“Mr. Mordukovich is very keen on pedigrees and especially stallions and he follows American racing much more than I do,” the French agent explained. “The Constitutions are pretty special-looking horses and I said to him, ‘We must buy one.’ He quite liked that horse too, so we decided to go for one.”

He continued, “Most of the racing in Russia is on dirt, and for that reason, I like to buy those horses in America at Keeneland. Conditions [in Russia] can be pretty tough and sometimes it isn’t very easy keeping them sound, so I would not be very keen on those big, scopey kinds of horses. I probably tend to focus more on the European-type horse, but those that have a pedigree for dirt.”

“He’s always complaining about the horses we bought that didn’t turn out, and I say to him, ‘Hang on, what about this one? What about that one? What about Lyudovik?’ and he goes, ‘You’re right,'” Berghracht said of Mordukovich. “And then we won the Derby and everything is fine. He’s a character. He’s a big fan of horses, he loves the game. He also races Standardbreds and Arabians. He’s a great ambassador.”

Also on behalf of Mordukovich, Berghracht signed a ticket on a son of Commissioner just two hips prior to purchasing Lyudovik during session nine of the 2018 September Sale. Snapped up for just $6,000, Bud’ Geroem broke his maiden in a domestic Group 2 race over the metric mile last September and added the Season Opening S. (RUS-G3) at nine furlongs first off the layoff May 17 (video, #6).

In most any line of business, the repeat customer is coveted, and given the success of Keeneland graduates in Russia, the clients are only too happy to return, hoping that lightning will strike twice. In a COVID-abbreviated racing season in 2020, some 32 Keeneland sales graduates have won Russia’s major events–10 at Group 1 level, 15 Group 2 winners and 12 Group 3 winners. And, in what was almost certainly a landmark achievement for the country, Tuz (Oxbow), a $7,000 graduate of the 2018 September sale who won his two starts at Pyatigorsk Racecourse by a combined margin of nearly 40 (yes, 40) lengths, ran a blinder to be second in the Listed Al Bastakiya S. at Meydan in Dubai this past March (video).

“It’s a competitive landscape. Everyone wants to have their market share and American Thoroughbreds have proven to excel on dirt surfaces around the world,” McGaughey said. “If they have success and their industry grows, they may start out just buying $5,000 horses, but that is twenty $5,000 horses that maybe otherwise would not have had a home. As their market continues to grow, they’re going to be inclined to come back to that source of success they had initially.”

Just five years ago, Russian interests acquired 60 horses for gross receipts of $1.7 million ($28,333 average), not an insignificant sum of money deep into the sale. Last year, they purchased no fewer than 112 horses for $4.1 million ($36,607 average). McGaughey is confident the trend will continue in a positive direction.

“The industry over there is definitely growing and they have made strides,” he said. “They’ve been working to try to become part of the IFHA [International Federation of Horseracing Authorities], the French PMU has set up their tote system and simulcasting throughout different regions.”

Foreign participation at this year’s September Sale is likely to be limited by travel restrictions currently in place, but McGaughey expects Russian interests to remain just as active as years past.

“With the pandemic, international sales are going to be down, but optimistically for the Russian market, there are currently no travel restrictions for Russian nationals coming into the United States,” he explained. “The majority of people I’ve spoken to are coming. There are a few exceptions, as the Russian Consulates are closed and are not issuing new visas at the moment, so some of them won’t be able to participate. But 90-95% of those planning to come over are still coming.”