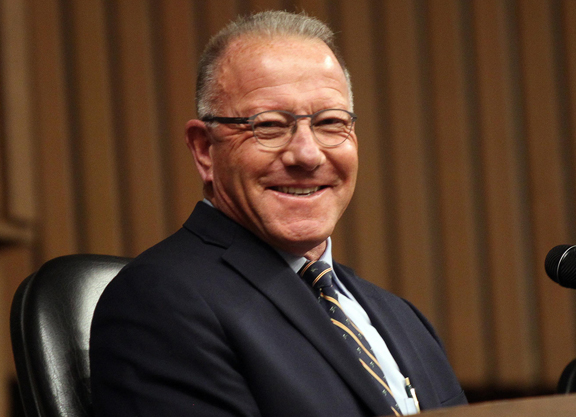 “Cris was known for his work ethic, keen wit and, like his father, his ability to command the sales ring, and he presided over some of the most memorable events in Keeneland sales history,” Bill Thomason, President and CEO of Keeneland, said. “Within approximately three hours at the 2006 September Yearling Sale, he was the auctioneer for both Meydan City, who brought an auction-record $11.7 million, and Plavius, who sold for $9.2 million. At the November Breeding Stock Sale [in 2007], Cris sold Playful Act (Ire) for a record $10.5 million, and he sold [GI] Kentucky Derby winner and future Hall of Famer Winning Colors for $4.1 million [at KEENOV in 1989]. Keeneland extends its sincerest condolences to Cris’s brother, Scott, also a longtime member of Keeneland’s auction team; his daughters Alden and Laurel; and his entire family. He will be greatly missed.”

Cris Caldwell was born to Mary and Tom Caldwell in Upland, California, on Valentine’s Day 1957 and began his auction career at age 16 with the Maclin Caldwell Auction Company in Chino, CA, “selling everything from furniture to horses” five days a week. According to the obituary, Caldwell was passionate about ranching and the Western way of life. He managed to instill those passions into his two daughters Alden and Laurel, who continue his legacy as a fourth-generation rancher and budding veterinarian, respectively. The obituary describes Caldwell as an “avid athlete and daredevil,” his life “full of notorious hunting, skiing and road cycling stories.”

Caldwell family matriarch Mary Caldwell, who survives her son, bred the Dan Hendricks-trained Brother Derek and the colt took the family all the way to the 2006 GI Kentucky Derby, in which he finished in a dead-heat for fourth.

Caldwell struck an imposing figure and was possessed of a booming baritone voice that was recognizable to nearly every sales-goer. He was a commanding presence on the stand and was the consummate professional, said Kurt Becker, since 2000 an announcer at the Keeneland sales and track announcer since 1997.

“My colleagues and I often commented that Cris worked just as diligently for horses in Book 6 as he did in Book 1,” Becker said when reached by phone Saturday. “I can think of numerous occasions over the years where I would be in the corridor on a break and it would be near the end of the September sale. Instead of selling colts for a million dollars, you’re selling them for $5,000. I can recall numerous times that my coworkers and I would stand in the corridor and just watch him work on the auction stand and we marveled and appreciated the fact that he treated every horse the same and he treated every consignor the same.”

Like any successful performer, Caldwell, who was known for the question “All through, all done?” prior to dropping the hammer, owned the stage when he plied his trade, Becker said.

“A Storm Cat colt that would later be named Mr. Sekiguchi sold for $8 million and I was on the auction stand announcing, Cris was the auctioneer,” Becker said, referring to the 2004 September sale. “It’s an intimidating atmosphere–the arena is full, there are photographers everywhere. I am fretting and worrying about ‘What do I say if Cris comes back to me for a second speech?’ I looked over and he was in complete command. His confidence, the way he just owned the room. If he was intimidated in that kind of atmosphere, he never let it show, and I think that’s one of the things that made him so good at what he did.”

John Henderson worked alongside Caldwell for the past 30 years.

“Cris was born to be an auctioneer, and he worked very hard to get the last dollar from the auction stand. He had the innate ability to quickly appraise a horse before selling it,” Henderson said. “He was one of the hardest-working auctioneers I’ve ever been around. Cris had a lot of confidence. That came through in his voice and in his chant from the auction stand. When I started off at Keeneland, I was working with Tom Caldwell. They were both superior auctioneers. This is a loss to the whole auctioneering fraternity.”

Henderson recalls receiving an email from Caldwell recently in which the auctioneer spoke about his career.

“I returned an email to him and told him that it was my pleasure to work with him on the auction stand for over 30 years,” Henderson said. “Not only did we work together on the auction stand at Keeneland, but we worked together at sales in California and New Mexico. When we were in California, he always made it a point to take everybody out to dinner and make sure everybody was comfortable when they were working in his ‘backyard’.”

Becker said that Caldwell had a breezy auctioneering style and was always light on his feet, often times tongue-in-cheek, quick-witted with a well-timed pun.

“He had a way of knowing how to connect with his audience and I could see him read the room and recognize moments when that sense of humor would help him connect with those in the seats,” Becker said. “He was willing to take a gamble with a sense of humor because I think his philosophy was, ‘I’m not going to sit back and be intimidated or nervous. Keeneland put me on the stand to do the job, they’ve got confidence in me. I’m going to do the job as I see fit.'”

Tributes also poured in from Thoroughbred community at large. Harris Auerbach tweeted: “I am beyond sad at the news of the passing of my dear friend Cris Caldwell. A wonderful father, son, cattleman, horseman and voice of Keeneland sales. Cris always gave me great advice and is someone who I had the ultimate respect for. I will miss him dearly. RIP Cris.”

HRRN’s Jude Feld also commented via Twitter: “Cris was a great guy to be around. He loved to roast me from the auctioneer’s stand. ‘You’re never gonna get that girl if you don’t bid another thousand,’ or ‘Somebody wake up that fat guy in the Hawaiian shirt.’ Really gonna miss him.”

Former DRF bloodstock columnist Glenye Cain Oakford tweeted: “Terribly sad news. He was unfailingly funny and kind, with a personality and a voice that filled up the auction ring. Rest In Peace, Cris.”

But beyond his considerable professionalism, Caldwell’s selflessness always shone through, Becker said.

“If I had to point to an indicator about the kind of person Cris was, I can remember that at the sales, if he and I were on break at the same time, I would lose count of how many times he would pick up his phone to check on his daughters. He was just an excellent dad in his concern and care and compassion. Cris was also someone who would send me a text message from time to time during a race meet. He would be home in Oregon and he would send me a text and say, ‘Hey bud, I know it’s a big day–Toyota Blue Grass-have fun, have a great call.’ I always appreciated that. I’m going to miss those messages. I’ll miss them a lot.”

In addition to his mother, brother and daughters, Cris Caldwell is survived by two sisters, Georgeanna and Karen, and several cousins, nieces and nephews. Funeral details have not been released.