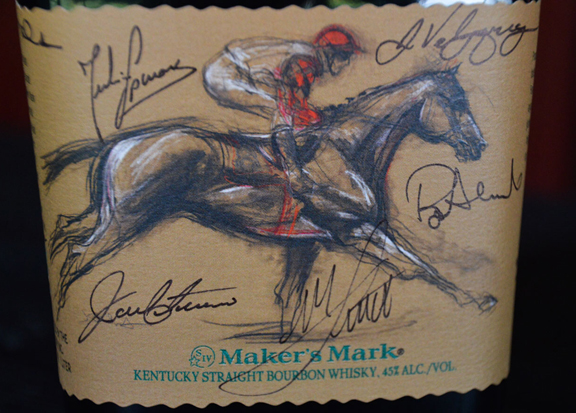 Keeneland and Maker's Mark have announced the 2020 Maker's Mark commemorative bottle, with all proceeds to benefit the Permanently Disabled Jockeys Fund (PDJF), an independent charitable organization that provides financial assistance to jockeys who have sustained debilitating on-track injuries.

The bottle goes on sale July 3 in limited quantities around Kentucky.

“Jockeys are truly some of the best athletes in the world and put their lives on the line every time they mount a horse,” PDJF President Nancy LaSala said. “Because of this, we're so thrilled that two of Kentucky's great institutions–Keeneland and Maker's Mark–have come together in such a creative way to help disabled jockeys who can ride no more.”

“I've been involved with several Keeneland and Maker's Mark bottles that raise funds for worthy causes,” Hall of Fame jockey Mike Smith said. “But this one really is where my heart is. Autographing a bottle is such a simple thing to do, and it's great knowing that I'm playing a small role in helping other riders whose careers were cut short.”

Keeneland and Maker's Mark formed a partnership in 1997 to create commemorative bottles each year for charitable organizations.

“We are always gratified by the enthusiastic public response to the Maker's Mark commemorative bottle, and we are so pleased sales this year will benefit the critical work of the PDJF,” Keeneland President and CEO Bill Thomason said.