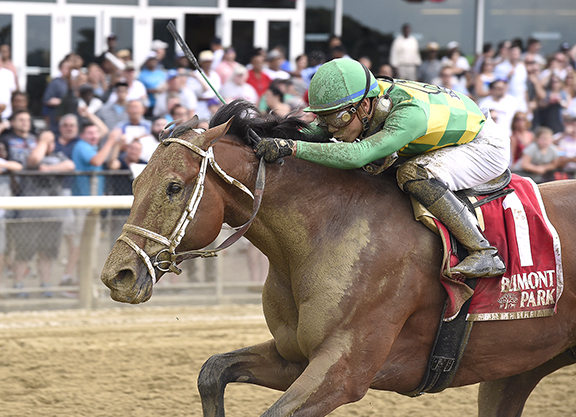 Keen Ice's last victory was a major upset when running down Triple Crown winner American Pharoah (Pioneerof the Nile) late in the 2015 GI Travers S., which was the only loss of that three-time Eclipse winner's sophomore campaign. The hulking bay shocked New York racing fans again Saturday scoring his first victory since the Travers with another late-running upset, this time besting heavily favored Shaman Ghost in the Suburban.

Away well from his rail draw, Keen Ice settled at the back of the quintet as Matt King Coal (Cool Coal Man) took up his preferred position at the head of affairs and was kept honest by Shaman Ghost through early fractions of :25.28 and :50.01. Picking it up a bit as three-quarters went up in 1:13.91, Matt King Coal was confronted by Shaman Ghost on the far turn and gave in to that rival in early stretch just as Keen Ice was ranging up menacingly in the center of the track. Shaman Ghost began to kick clear, but Keen Ice was just finding his best stride and charged clear late for a surprising victory.

“That was a great effort, he really ran a huge race,” winning trainer Todd Pletcher said. “Coming into it, we were a bit concerned with the lack of pace on paper. We thought he might have to be a little bit more forwardly placed and Jose [Ortiz] gave him a great ride in able to position him towards to the rail. The fractions weren't fast up front, but Jose had him in a perfect position and when he was able to swing out you really saw him extend to the wire.”

Pletcher added, “We'll see how he comes out of this, but the [GI] Jockey Club Gold Cup [Oct. 7] would most likely logically be his next step.”

After failing to hit the board in five attempts at the highest level following his 2015 Travers victory, Keen Ice was transferred from Dale Romans to Pletcher after the 2016 G1 Dubai World Cup and was subsequently sidelined with an injury. Debuting for Pletcher in a Belmont optional claimer in October, the bay checked in third that day and went on the GI Breeders' Cup Classic, where he completed the trifecta behind superstar champion Arrogate (Unbridled's Song) and reigning Horse of the Year California Chrome (Lucky Pulpit). Runner-up to stablemate Stanford (Malibu Moon) in Gulfstream's GIII Harlan's Holiday S. in December, Keen Ice checked in fourth behind Arrogate and Shaman Ghost in the $12 million GI Pegasus World Cup Invitational S. Jan. 28 and was last seen finishing seventh to Arrogate in the Dubai World Cup Mar. 25.

Pedigree Notes:
Keen Ice is the first and only foal out of Medomak, a half-sister to Grade III winner Coal Play (Mineshaft). The winner traces his lineage back to MGISW Verrazano; GISWs Chic Shirine, Somali Lemonade and Serra Lake; and MGSW Hungry Island.