Keen Ice Out of Breeders' Cup, Retired to Calumet 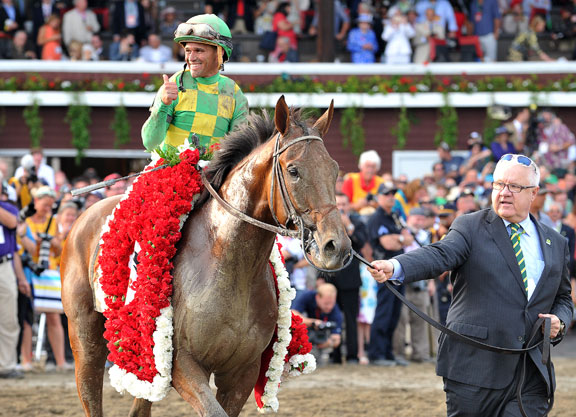 Donegal Racing and Calumet Farm's $3.4-million earner Keen Ice (Curlin–Medomak, by Awesome Again) will be forced to miss the GI Breeders' Cup Classic due to a wrenched ankle and will instead retire to Calumet Farm to take up stud duties in 2018. Next Saturday's Classic was scheduled to be his final career start.

Third in the 2015 GI Belmont S. and second in the GI Haskell Invitational S. behind Triple Crown winner American Pharoah (Pioneerof the Nile), the $120,000 Keeneland September yearling acquisition played spoiler to the eventual Horse of the Year's perfect sophomore season when running him down in the GI Travers S. at Saratoga.

Transferred from Dale Romans to Todd Pletcher midway through last season, he was third in the 2016 GI Breeders' Cup Classic and really came to hand over this past summer. A clear-cut winner of Belmont's 10-panel GII Suburban S. July 8, the bay was second to leading handicap horse Gun Runner (Candy Ride {Arg}) in the GI Whitney S. Aug. 5, and filled the same slot in the GI Jockey Club Gold Cup Oct. 7. He retires with three wins, four seconds and five thirds from 24 starts, 21 of which were at the graded or group level.

“Donegal Racing has been blessed to campaign a number of Grade I race winners,” said Jerry Crawford, president of Donegal. “But only Keen Ice has pulled off one of the biggest sports upsets of the century when he beat Triple Crown Winner American Pharoah in the 2015 Travers S. at Saratoga.”

“Thoroughbred racing needs more durable horses with stamina to succeed in the big contests,” Crawford said. “In Keen Ice we had both. We see nothing but positives for his genetic line.”