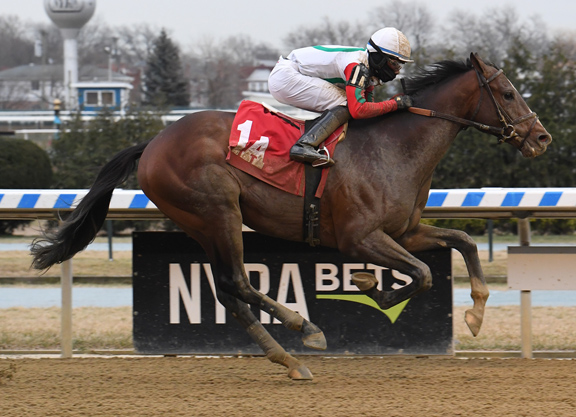 Sent off as part of an entry at odds of 13-4, The Estate of Paul Pompa Jr.'s Carillo (Union Rags) overcame a bit of a sluggish start and an overland run around the far turn to graduate at first asking, earning the 'TDN Rising Star' designation in the process.

Squeezed back a bit at the break, the homebred trailed early before improving in traffic to sit midfield as they hit the turn. Consigned to a wide trip around the bend, Carillo rallied deep into the stretch and sustained a long run to draw away by 2 3/4 lengths at the finish over the more-experienced and well-bet Al's Prince (Cairo Prince) while covering an additional 23 feet (about 2 1/2 lengths), according to Trakus data. .

The late Pompa acquired Carillo's dam, a half-sister to MSW & GSP Secret Someone (A.P. Indy) and to the dam of GISW Dunbar Road (Quality Road), for $185,000 carrying the colt in utero at Keeneland November in 2017. The colt's third dam, the SW & GISP Private Status, was responsible for 2000 GI Kentucky Oaks and GI Mother Goose S. winner Secret Status (A.P. Indy). The sires of Carillo's first two dams were Classic winners, while Alydar was famously second in each of the Triple Crown races in 1978. Union Rags, of course, was victorious in the 2012 GI Belmont S.

Carillo is set to be offered as hip 1566 as part of the complete dispersal of the Pompa bloodstock at Keeneland January next Thursday. Proper Mad sells as hip 793 near the end of Tuesday's second session. Lane's End is handling the dispersal.