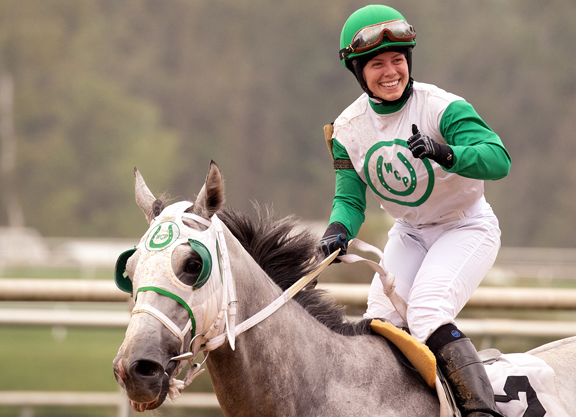 Jockey Katie Davis has alleged that the NYRA racing office has been telling trainers not to ride her because of a New York State Gaming Commission rule that requires that horses running in the same race ridden by a husband and a wife must be coupled. Davis recently married Trevor McCarthy and both are riding at Aqueduct this winter.

The comments were originally made on Twitter Friday and were repeated to the TDN the following day.

Davis said she has heard the same story from several trainers.

“I've heard this from a lot of the trainers, pretty much everybody I ride for,” she said.

“I understand there is a horse shortage and the racing office is doing its best to put together a card, but they shouldn't do it at the expense of someone's career. That isn't right,” said Davis' agent, Mike Monroe.

“These accusations are completely false and without merit,” McKenna said. “In fact, NYRA has consistently advocated for modernized rules regarding coupled entries in New York state and we will continue to do so for the benefit of New York racing as a whole.”

Davis and McCarthy, who were married in mid-December, came to New York after riding in Maryland and were unaware of the Gaming Commission rule. Starting Jan. 1, the Gaming Commission began to enforce the rule regarding married riders. Through Feb. 5, McCarthy has had 12 winners at the meet from 122 mounts. Davis has gone just one for 43. She picked up her first winner Friday, one race after crossing the wire first only to get taken down by the stewards for interference. Their ruling came after her brother, Dylan Davis, claimed foul against her. Horses ridden by siblings, like brothers Irad and Jose Ortiz, do not have to be coupled.

Davis said she has no intention of returning to Maryland.

“Trevor and I have decided to stick together and not let these people walk all over us,” she said. “It's not fair. I'm just trying to make a living and there's no reason for me to stop riding here.”

Davis has hired an attorney, who has asked the Gaming Commission to issue an emergency rule rescinding the current rule covering married riders.

In a letter sent to Robert Williams, the executive director of the New York State Gaming Commission, lawyer William Gotimer Jr. wrote: “This rule has added to the many difficulties female riders face in pursuit of their careers and should be rectified. Due to application of this anachronistic rule Ms. Davis must make a choice between entering into the Constitutionally protected state of matrimony and furthering her career. This is not something that should be mandated by a government agency.”