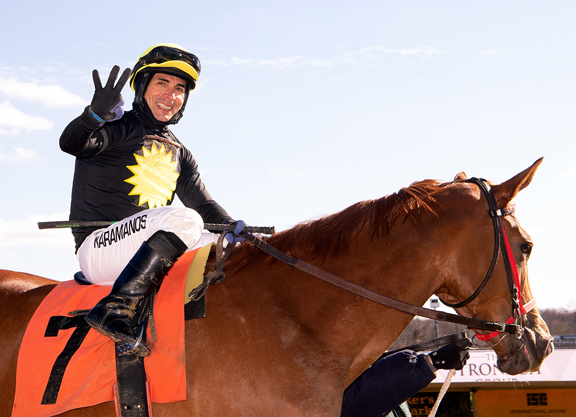 The summer meet at Laurel Park wrapped up Saturday with jockey Horacio Karamanos just holding his lead over Jevian Toledo to win the riding title in spite of failing to reach the winner's circle Saturday while Toledo won twice. Karamanos won 42-41 over Toledo. He ranked second in purse earnings with more than $1.35 million, while Toledo tallied $1.52 million.

“I kept finishing second today,” said Karamanos. “I couldn't win. Sometimes you win and sometimes you don't have the luck. That's what happened to me today. But it's the game. You need some luck. I think I had beautiful luck because I didn't get hurt or anything like that. To me, when I finish my races in one piece, it's my best win, and I think for everybody it's the same.”

Karamanos has now won six titles in Maryland, including the Laurel fall meets in 2002 and 2007. The Argentine native won more than 1,500 races in Argentina before moving his tack to the U.S. in 2000.

Trainer Claudio Gonzalez was Laurel's leading trainer for the summer meet with 27 wins. He earned his 13th career title and 10th in the last 11 meets in Maryland. Damon Dilodovico trailed in second with 16 wins.

Robert D. Bone, one of Gonzalez's main clients, was the meet's leading owner with 14 wins.

Live racing in Maryland will now move to Baltimore for the Preakness Meet at Pimlico, which is scheduled for Sept. 24-28 and Oct. 1-3. The 145th running of the GI Preakness S. will be held Oct. 3.