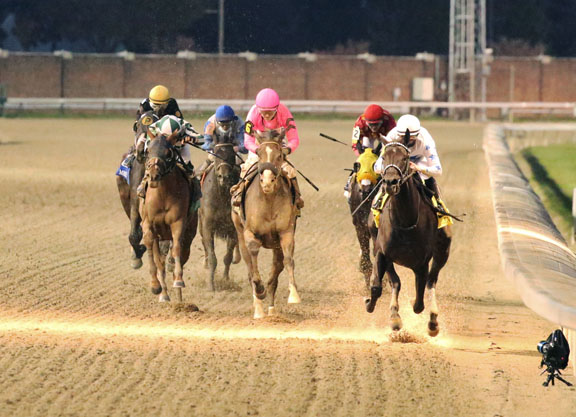 Lightly raced Princess Grace handled the main track best of this turf-meant group to make the grade in only her fourth lifetime start. A 5 1/2-length debut romper on the Colonial sod and over a next-out winner Aug. 2, the Moore homebred cleared her first-level allowance condition at Monmouth Sept. 5. She had last been seen splitting Stunning Sky (Declaration of War) and How Ironic when second in the GIII Pin Oak Valley View S. at Keeneland Oct. 16.

Prompting the pace from second among a strung-out field, the dark bay was forced to hit the accelerator midway down the backside to avoid getting shuffled back as foes behind her attempted to take closer order. Princess Grace took command midway around the turn for home under a seemingly confident Florent Geroux, and kicked on nicely from there while never seriously threatened.

“The pace unfolded exactly how I thought that the horse to my inside (Positive Danger {Uncle Mo}) would go to the lead and we could sit just to her outside,” Geroux said. “She broke very alertly and was tracking nicely throughout the race. She’s a nice filly and with winning on the dirt it gives the connections more options in the future but I would guess goes back to turf.”

Winning conditioner Mike Stidham added, “You’re always concerned about a horse that didn’t race on dirt yet. She had pretty consistent works over the Tapeta surface at Fair Hill. We didn’t necessarily have a great line on how she would take to the dirt, but her early works were on the dirt. We thought she handled it very well then, so we were cautiously optimistic. We knew that her dam Masquerade was game on both dirt and turf so we felt good trying it. Down the backside you saw Florent was in a great spot just off the leader. When he let out a notch she just opened up impressively.”

Princess Grace becomes the sixth black-type winner, third graded, for young sire Karakontie. A rare North American runner whose sire and broodmare sire were both bred in Japan, she is the first stakes winner out of a mare by Canada’s leading sire Silent Name.

Stidham trained the winner’s dam Masquerade, a $15,000 yearling, for four of her six career wins–she scored three times on the grass, twice on the dirt and once on synthetic over a career that stretched from two to seven. Her two stakes placings came for Stidham on the turf.

Masquerade has a yearling filly by Kitten’s Joy and was bred to Frosted for 2021.