Just a Day at the Beach in the Malibu 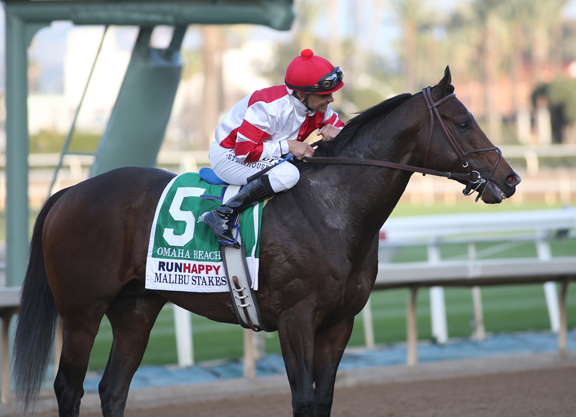 Fox Hill Farms, Inc.'s Omaha Beach (War Front) put an exclamation point on his sophomore season with a powerful run as the heavy favorite in Saturday's GI Runhappy Malibu S. at Santa Anita. It was the fourth stakes win on the card for Hall of Famer Mike Smith, but more importantly the 217th Grade I victory of his storied career, surpassing Jerry Bailey's record. Smith tied the record two races earlier aboard Hard Not to Love (Hard Spun) in the GI La Brea S.

Pounded at the windows and off at 2-5 facing just four rivals, the future Spendthrift Farm resident Omaha Beach was off cleanly from his outside draw and sat perched out in the clear in fourth down the backside as longshot Much Better (Pioneerof the Nile) tore away from them through a :22.43 opening quarter. Smith and Omaha Beach could wait no more entering the turn, and they mounted a sweeping offensive that quickly changed the complexion of the race. Much Better dropped out at that point, with second choice Complexity (Maclean's Music) and Manny Wah (Will Take Charge) working hard to keep up with the chalk. Any attempts to run with Omaha Beach appeared futile as he continued to cruise on the lead past the quarter pole, and the dark bay cantered home from there while seeming to save something for next month's GI Pegasus World Cup. 'TDN Rising Star' Roadster (Quality Road) rallied from last to second, while Manny Wah hung on for third.

Omaha Beach hit the board thrice on the grass and once more on the local dirt before finally breaking through by nine lengths in the slop over this track and trip Feb. 2. The light bulb went on after that, and he wasted little time climbing the class ladder, annexing a division of the GII Rebel S. at Oaklawn by a nose over champion 2-year-old Game Winner (Candy Ride {Arg}) Mar. 16 and besting highly regarded Improbable (City Zip) and subsequent GI Kentucky Derby winner via DQ Country House (Lookin At Lucky) in the GI Arkansas Derby Apr. 13.

With his stud rights already secured by B. Wayne Hughes's Spendthrift, he was expected to go favored in the “Run for the Roses”, but an entrapped epiglottis required him to scratch at the beginning of Derby week and undergo surgery. When he did race again, he found himself somewhat surprisingly in the Oct. 5 GI Santa Anita Sprint Championship over six panels. That abbreviated trip proved anything but too sharp for Omaha Beach, however, as he reeled in brilliantly quick Shancelot (Shanghai Bobby), who came back to be second in the GI Breeders' Cup Sprint.

Omaha Beach's connections, meanwhile, had three Breeders' Cup options to consider–the Sprint, GI Dirt Mile of GI Classic–and opted for the middle distance. The even-money choice found himself too far back that day, however, and could only manage second behind a powerhouse performance from up-and-coming fellow 3-year-old Spun to Run (Hard Spun).

When asked after the Malibu if Omaha Beach was the best horse he ever trained, Mandella said, “I can't think of one better, although he hasn't been around long enough of those that stayed forever, [Spendthrift's] Beholder (Henny Hughes) and them, but probably the few times he ever got beat were my fault.”

Omaha Beach will race once more in the Jan. 25 Pegasus before heading to Kentucky to begin his second career.

“He's like a son; he's better than a son. He makes me money; he doesn't cost money,” Mandella quipped. “I thought about it a lot and I should have spoken to Mr. Porter when he was a 2-year-old and suggest castrating him, and I still haven't. He's a great horse.”

After a rough year for Santa Anita and Southern California Racing, the Hall of Famer said, “This is really special for us, Opening Day at Santa Anita, after all the trouble we have been through this year, this place is The Great Race Place and we all need to remember that.”

Smith Surpasses Bailey…
“It is very humbling, I am a very blessed man and when you are blessed, opportunities arise, like I get to ride for Mr. Mandella and all kinds of things happen,” Smith said after breaking Bailey's record. “It's just amazing, and this horse speaks for everything. He's just beautiful, so fun to be around, so fun to ride, and so fun to train. It just shows how great this horse really is. I'm so happy and so blessed to be a part of it. To surpass Jerry on Omaha Beach even makes it that much more special.”

Smith has been following in Bailey's footsteps for a long time: “Jerry is someone that comes from my hometown. I was born in New Mexico, but raised in Texas, in El Paso where he's from. His father was my dentist. I went to the same high school that he did. When his high school gave him an honor, I was in the grandstand watching him. I wasn't even riding yet; I was just a kid. He's always meant a lot to me, so to surpass him means a whole lot.”

Pedigree Notes:
Omaha Beach hails from one of the most potent female lines in the stud book. His dam, a $3.2-million Keeneland September yearling, is a daughter of three-time GISW Take Charge Lady (Dehere), who was named Broodmare of the Year in 2013 after the exploits of her sons Will Take Charge (Unbridled's Song), that year's champion 3-year-old colt; and GISW Take Charge Indy (A.P. Indy), the leading third-crop sire who was recently repatriated from Korea. Omaha Beach's half-sister Take Charge Brandi (Giant's Causeway) pulled off a 61-1 shocker at Santa Anita in the 2014 GI Breeders' Cup Juvenile Fillies en route to an Eclipse Award, and has topped two renewals of the Keeneland November sale–when selling for $6 million in 2015 and for $3.2 million in foal to Justify this year. Charming has not produced a foal since Omaha Beach.