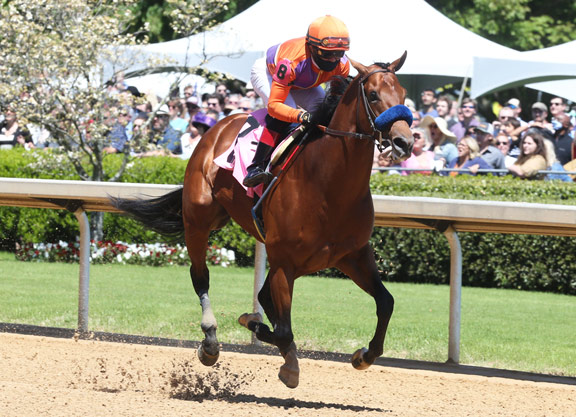 Spendthrift Farm made waves when it announced, following the failed drug test of GI Kentucky Derby winner Medina Spirit (Protonico), that it would be moving some horses out of trainer Bob Baffert's barn. One of the most intriguing of those horses, 'TDN Rising Star' FOLLOWING SEA (Runhappy), will make his first start for the Todd Pletcher barn in this first-level allowance sprint early on Thursday's card. Unveiled at 9-10 Mar. 6 at Santa Anita, the homebred finished second and was later demoted to third for causing crowding early in the race. Shipped to Oaklawn for his next engagement Apr. 10, the bay dueled through a sizzling opening quarter, shook clear on the turn and never looked back, winning geared down by 5 3/4 lengths with a 97 Beyer. Since being sent to Pletcher, Following Sea shows a pair of sharp local works, including a half-mile bullet in :48 flat (1/78) over the training track May 28. His main competition on paper comes from another 'Rising Star' in Klaravich Stables' returning Reinvestment Risk (Upstart). Debuting with an impressive 7 3/4-length romp against a live-looking Saratoga maiden group last August, the $280,000 OBS March buy was runner-up to Jackie's Warrior (Maclean's Music) in both the GI Runhappy Hopeful S. and GI Champagne S. before closing his juvenile campaign with a disappointing 10th-place run in the GI TVG Breeders' Cup Juvenile. The Chad Brown trainee also breezed sharply here May 28, going a half-mile on the main track in :48 1/5 (4/86). TJCIS PPs

Courtlandt Farms went to $975,000 to secure AMERICAN PARADE (American Pharoah) at the 2019 Keeneland September Sale and the sophomore filly will make her career debut in this promising maiden heat Thursday at Belmont. The first foal out of her dam, a half-sister to Stage Magic (Ghostzapper), the dam of Triple Crown winner Justify (Scat Daddy), she displays six Belmont breezes for trainer Shug McGaughey, punctuated by a four-furlong bullet in :47 1/5 (1/7) May 18. Made a narrow favorite on the morning line is another firster, My Racehorse and Spendthrift Farm's Lady Valentine (Into Mischief), who will break from the rail for Todd Pletcher following a sharp Saratoga worktab. Bought for $385,000 at KEESEP, she recorded a pair of :47 3/5 half-mile bullets at the Spa–a best-of-35 move May 7 and a best-of-20 move from the gate 13 days later. Her second dam is a half-sister to the late GISW and influential sire Pioneerof the Nile (Empire Maker). Also opening her account is Klaravich Stables' Equal Pay (Qualty Road). Herself a $475,000 KEESEP pickup, the Chad Brown pupil breezed a half-mile from the gate over this track in :48 3/5 (6/45) May 16. Of the horses with experience, After the Party (Into Mischief) stands a big chance. Yet another pricey KEESEP buy at $750,000, the Jeremiah Englehart charge was a solid third in her debut after dueling with next-out 'TDN Rising Star' Always Carina (Malibu Moon) debuting in the Aqueduct mud Apr. 11. The runner-up in that spot, Amendment Nineteen (Constitution), also returned towin impressively here Sunday. TJCIS PPs

Blue-blooded Juddmonte homebred MAXIMUS AURELIUS (Tapit) will make his career bow in this elongated sprint on Thursday's twilight card at Churchill. The Bill Mott trainee is the second foal to race out of the brilliant MGISW Close Hatches (First Defence), following his multimillionaire full-brother Tacitus, and he got acquainted with this surface in a trio of local works, the swiftest of which was a half-mile spin in :48 2/5 (9/57) May 16. TJCIS PPs —@JBiancaTDN