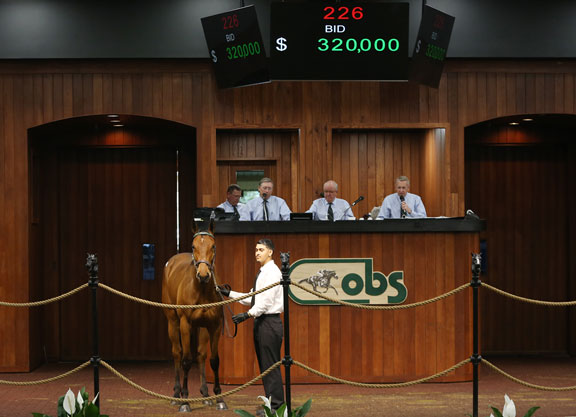 International star sire power will be on display in Friday's opener at Belmont, as Coolmore unveils RIVER TIBER (War Front) against Gary Barber's Mrs Frankel (Ire) (Frankel {GB}) and six other juveniles in this intriguing turf sprint, the first 2-year-old turf race in New York this year. River Tiber, a $500,000 Keeneland September buy, is a full-brother to 2015 GI Breeders' Cup Juvenile Turf hero Hit It a Bomb and 2016 G1 Cheveley Park S. victress Brave Anna out of an Irish GSW dam. The bay shows an array of Keeneland breezes for Wesley Ward, capped by a half-mile gate breeze in :48 4/5 (27/116) June 6. Mrs Frankel, picked up for $320,000 at OBS March after breezing a quarter-mile in :21 1/5, is out of a SP full-sister to MGSW/MG1SP Gregorian (Ire) (Clodovil {Ire}). Bred by today's rival Coolmore, she has five published breezes for Mark Casse, most recently going three furlongs over the local training track in :36 4/5 (2/15) June 6. TJCIS PPs

Mike Pegram, Karl Watson and Paul Weitman's UNCLE CHUCK (Uncle Mo) is bred to be a runner, and has done nothing to suggest otherwise in the mornings as he prepares to start his career for Bob Baffert in this two-turn test. Out of MGSW/MGISP Forest Music (Unbridled's Song), the dark bay is a half-brother to sire Maclean's Music (Distorted Humor), he of the 114 Beyer in his only career outing, and GSWs Kentuckian (Tiznow) and Electric Forest (Curlin). A $250,000 KEESEP buy, he shows an array of quick works both locally and at Los Alamitos, including a five-furlong Los Al bullet in :58 4/5 (1/16) May 3. From the same barn, $800,000 KEESEP grad Big Mel (Quality Road) will get another chance after finishing fifth as the favorite sprinting on debut here May 15. TJCIS PPs