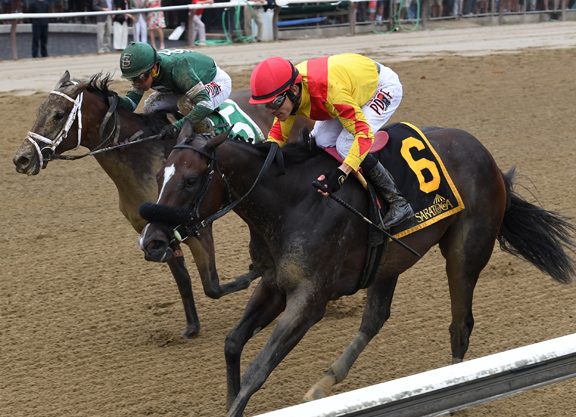 Sue's Fortune became the latest New York-bred to succeed in graded company at Saratoga Saturday, showing a different dimension coming from off the pace before holding off a late bid by Virginia Eloise from out of the clouds. An 8 1/2-length front-running debut winner in restricted company downstate July 5, the bay broke well enough from her outside draw and sat third as favored 'TDN Rising Star' Lyrical Lady (More Than Ready) showed the way. She ranged up to take over three deep through a :45.53 half as the favorite quickly came up empty, and hit the quarter pole clearly in command. Struggling with her leads to midstretch, she leveled off and dug deep as Virginia Eloise–who was miles out of it and climbing early–gobbled up ground to cut it close.

“It was Plan B,” rider Junior Alvarado said of the tactics employed Saturday. “We tried to go with Plan A, which was hoping she broke like last time. She broke good, but not as sharp as last time. We wanted to put a little pressure early, though. I was sitting in a perfect position, by the three-eighths pole, she started pulling me. I saw horses struggling and I saw horses coming near, so I thought I had to take a shot at that point to let me filly go and hope she would hold. It worked out.”

Trainer Jeremiah Englehart added, “I think the biggest thing for her is in her first race, she goes out she takes the lead and she runs away; this race she stalked. She's a racehorse. Now we just have to find out when she's right for her next race and try to find what the next spot is going to be. For her to settle off the pace this time and close, she wants to run. She's won on the lead [and] she's won off the lead, so hopefully now we can get her to relax even more and finish strong as well.”

Pedigree Notes:
Sue's Fortune is the 23rd graded winner for her veteran stallion. Her dam, a full to MSW Talking Treasure, was claimed for $25,000 in February of 2009 and won once more for Englehart's father Chris. Democrat Taxes produced a full-brother to the Adirondack winner Apr. 24 before being bred back to Dialed In.