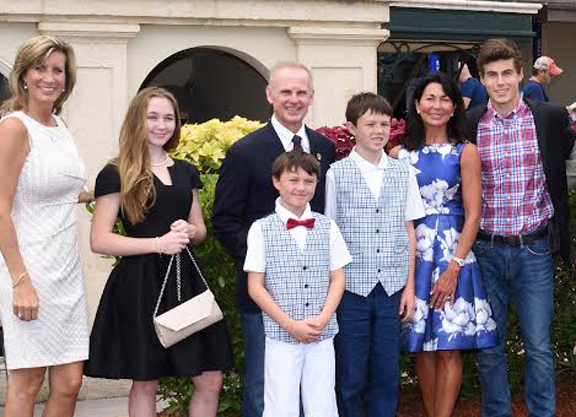 As the co-owner and co-manager of the family-operated, Oklahoma-based Mathis Brothers Furniture company, Bill Mathis has spent years focused on cultivating a business with lasting potential–and the same can be said about his involvement as a Thoroughbred owner. Initially entering the game in the early 1980s with his father, Leonard, Mathis currently operates Mathis Stable alongside his wife, Terry, and has enjoyed considerable success with the likes of GSW & MGISP My Miss Sophia (Unbridled's Song) and MSW & GSP Lira (Giant's Causeway). With an eye toward the future, and after the family patriarch demonstrated waning interest in ownership, the Mathises recently decided to offer MSW Adorable Miss (Kitten's Joy) [Hip 403] and SW Bronson (Medaglia d'Oro) [Hip 411] as part of the fledgling Elite Sales consignment at the Fasig-Tipton July Selected Horses of Racing Age sale next Monday.

“These horses are the last of a crop that my dad was partners with us on,” Mathis explained. “He just doesn't enjoy or follow the business as much as he used to. So we thought we'd sell this last crop while they have so much great potential. We can continue to go back to September and buy some more horses…I can understand that you get tired of everything at some point, and he's almost 90 years old. He's not enjoying it as much as he was at my age.”

While Leonard enjoyed success as the owner of the speedy MGSW mare Pine Tree Lane and GSW Alabama Nana (Ire) in the 1980s, Bill and Terry Mathis ramped up their involvement in the game in the early 2010s, spending roughly $3 million at the 2-year-old sales–a departure from his family's previous emphasis on securing horses of racing age.

Mathis was quick to acknowledge that the results on the racetrack were not necessarily congruent with the investment, leading him to believe that new buyers are better off attaining proven commodities.

“When we first got in this business in the '80s, we had some of our best luck buying horses that were at the track because you had so much more expectation about what you were buying,” Mathis added. “You could vet them, you could see their race record, and you were having fun right away. Compared to a yearling, there is so much that can go wrong and so much time involved that they change so much in that period of time. It's hard for anyone to guess. And then you see what's happening in the 2-year-old in training sales where people are paying $1 million, plus, for horses that can work an eighth of a mile with no pedigree.”

According to Mathis, the July Sale offers buyers a unique opportunity to secure stakes performers–such as Adorable Miss and Bronson–while affording sellers the chance to tailor their stock.

The Mathises are well acquainted with horses of racing age sales, having parted ways with My Miss Sophia for $2.15 million at the 2014 Fasig-Tipton November sale, and more recently, returning to that same auction in 2016 to sell Lira for $950,000. While the July Sale places a clear emphasis on fit-and-ready racing prospects, Mathis said that Adorable Miss–a full-sister to 2016 GIII Pucker Up S. victress Noble Beauty–possesses significant residual value as a broodmare prospect once her racing career has concluded.

“We have had some good luck,” Mathis reflected. “Fillies provide you with a parachute, if you will, to make good broodmares. Adorable Miss is such a beautiful horse–she'll undoubtedly have a beautiful foal some day.”

As for the time being, the Mathises spent last weekend in sunny South Florida watching their two primary July offerings compete on the turf at Gulfstream Park for trainer Todd Pletcher. Adorable Miss, a $155,000 KEESEP yearling buy, notched the second stakes win of her career and third win from four starts in the one-mile Martha Washington S. [video], while Bronson rallied from well off the pace to miss by less than a length in the Not Surprising S. over the same course and distance.

“We had a whole lot of fun down at Gulfstream, and we're proud of the efforts both horses put in,” Mathis said. “Adorable Miss just sat there and waited, and then turning for home, she got it done. In fact, Tyler [Gaffalione] told me, after he got off the horse, that he had a ton of more horses. He just showed her the whip to keep her alert, but he said she had a whole other gear that he never had to use…Bronson got pushed so wide, and the other horse coming out of the one-hole got an easy lead. Speed was holding all day on that turf course–and it was just too tough for him to make up that much ground in the last eighth of a mile, but boy, he almost did it.”

Mathis said he believes Bronson has significant room for improvement at longer distances, while Adorable Miss should be well positioned to enter the graded stakes ranks in the near future. The stable's two-time winner Liberty Kitten (Kitten's Joy) will also pass through the ring as part of the Denali Stud consignment. SW My Miss Tapit (Tapit)–fourth in Saturday's GII Mother Goose S. at Belmont–was entered with Elite Sales, but will scratch and continue to campaign for Mathis Stable.

Equipped with years of experience and business acumen, Mathis said he has full confidence in the lasting potential of Bradley Weisbord and Liz Crow's Elite Sales venture, which debuts at the July Sale.

“Bradley and Liz and that entire team does their homework,” Mathis commented. “They want to be a long-term player in the business. And that's the only way to be in business–where you develop a reputation that everyone is happy.”

Bill and Terry Mathis are undoubtedly happy with their position as owners with a long-term commitment to the game. In many ways, the 2017 July Sale represents a stopping off point as they part ways with their current stock and move toward a return to the yearling sales.

“I look forward to staying in the business,” he concluded. “We're having so much fun. I would encourage others to jump in and enjoy it.”