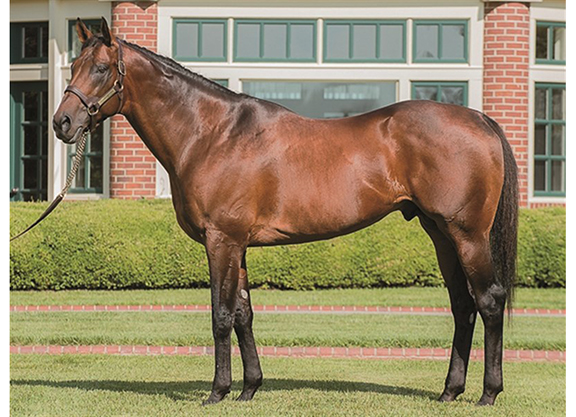 Vinnie Viola's St Elias Stable will have high expectations heading into Thursday's July 4 card at Belmont, as it unveils a coupled entry of 2-year-olds who cost a combined $900,000 at last year's Keeneland September Sale in the day's fifth event. The first half of the pairing, trained by Todd Pletcher, is $400,000 KEESEP grad DR POST (Quality Road). The dark bay is out of Grade II winner Mary Delaney (Hennessy) and has trained forwardly at Saratoga, capping off preparations with a swift half-mile gate breeze in :48 flat (2/44) June 26 on the Oklahoma.

His teammate is Night Code (Honor Code), a $500,000 KEESEP buy owned in partnership by St Elias and West Point Thoroughbreds. Attempting to become the first winner for his freshman sire (by A.P. Indy), the Steve Asmussen trainee is a half to 'TDN Rising Star' Moonshine Memories (Malibu Moon), who won her debut at Del Mar in August of 2017 en route to capturing both the GI Del Mar Debutante and GI Chandelier S. Also drilling sharply, including a half-mile gate work in :46 2/5 (1/17) June 25 at Keeneland, Night Code is out of a half-sister to dual champion Favorite Trick (Phone Trick).

Triple Crown winner American Pharoah (Pioneerof the Nile) will be represented by the fast-working Another Miracle. Owned by Len and Jonathan Green, the bay cost $210,000 at KEESEP and is out of SW Retraceable (Medaglia d'Oro). Trained by Gary Contessa, he was the swiftest of 80 half-mile workers on the local training track June 7 when covering the distance in :48 1/5 from the gate. TJCIS PPs

Win Star Farm and Stonestreet Stables' CENTRAL PARK (Pioneerof the Nile), bought for $825,000 as a KEESEP yearling, makes his debut for trainer Rodolphe Brisset in this turf route finale. The bay is out of SW turfer Dynazaper (Ghostzapper), while his second dam is GSW Broad Dynamite (Broad Brush). He shows an encouraging worktab at Keeneland going back to early May, punctuated by a half-mile breeze from the gate in :46 3/5 (1/66) there June 26. TJCIS PPs

Bob Baffert unveils a sophomore filly with big potential for Three Chimneys Farm in SHOCKING FAST (Distorted Humor). The bay is the first foal out of unraced Amour d'Ete, a half-sister to champion and star sire Speightstown (Gone West) and full-sister to MGSW/MGISP Irap who hammered to Three Chimneys for $1.75 million at KEESEP in 2013. Shocking Fast shows a local workout back on Apr. 23 which was just that, going a half-mile from the gate in an eye-popping :45 1/5 (1/6). She also worked in company with champion Game Winner (Candy Ride {Arg}) when covering five panels in 1:01 flat (5/26) June 28 at Santa Anita. TJCIS PPs