July 17 Insights: Full to Hit It a Bomb Entered On Spa Turf 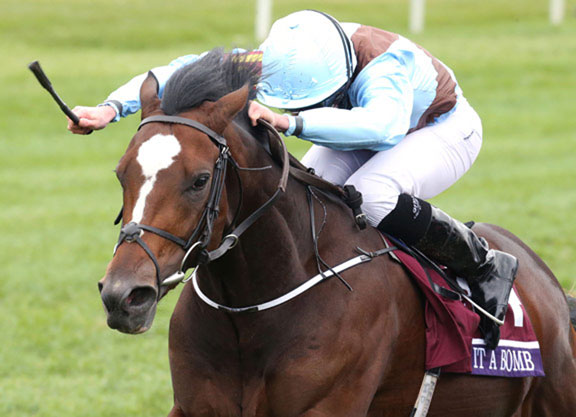 Rain is in the forecast for Wednesday's week two opener at Saratoga, but if the day's seventh event stays on the turf, Chad Brown starts an intriguing pair of debuting sophomores with hefty European bloodlines. Bass Racing's BORDER TOWN (War Front), a $325,000 RNA at Keeneland September in 2017, is a full-brother to Hit It a Bomb, victor of the 2015 GI Breeders' Cup Juvenile Turf, and Brave Anna, who captured the G1 Cheveley Park S. at Newmarket in 2016. The dark bay shows a steady series of breezes going all the way back to April at Palm Meadows, and capped preparations with a half-mile spin in :48 3/5 (3/21) over the Oklahoma dirt July 11. His workmate that day, and for several other breezes, was Klaravich Stables' Good Governance (GB) (Kingman {GB}), a 120,000gns purchase at Tattersalls October in 2017 who also opens his account here. The bay is out of Group 2 winner Please Sing (GB) (Royal Applause {GB}) and shares a second dam with MGSW turf sprinter Belvoir Bay (GB) (Equiano {Fr}).

If the race comes off the grass, WinStar Farm main-track-only firster Off the Record (Distorted Humor) looks to have a big chance. Bought for $150,000 at Fasig-Tipton October, the Rodolphe Brisset trainee is out of a half-sister to GISW Bluegrass Cat (Storm Cat) and MGSW Lord of the Game (Saint Ballado) and shows an array of speedy breezes at his Keeneland base, highlighted by a half-mile gate work in :46 3/5 (1/66) June 26. Eric Fein's Corcoran (Curlin), another MTO who would be making his career bow, has been working sharply as well, including a five-furlong breeze in 1:00 flat (4/27) June 23 at Belmont. The $500,000 KEESEP buy's first two dams were unraced, but second dam Jessi Take Charge (War Chant) is a half to MGISW Take Charge Lady (Dehere), the dam of champion Will Take Charge (Unbridled's Song) and GISW Take Charge Indy (A.P. Indy). TJCIS PPs

Michael Stinson's KING JACK (Jimmy Creed) kicked away impressively to score by 3 1/4 lengths debuting June 1 at Santa Anita, an effort good enough for 'TDN Rising Star' honors, and he tries to go two-for-two in this opening day spot at Del Mar. A $100,000 KEESEP pickup, the chestnut's first-out score, which earned an 88 Beyer, was further flattered when runner-up Morning Snow (Morning Line) came back to romp by eight lengths with an 86 Beyer June 23 in Arcadia. That one's trainer, Bob Baffert, will be represented here by the returning Metropol (Shackleford). Hammered to 7-10 favoritism in his October unveiling at Santa Anita, the $200,000 OBS April buy wore down a loose leader to prevail by three-quarters of a length, and sports a sharp worktab for this comeback, punctuated by a six-furlong move in 1:11 4/5 (1/4) July 11 at Los Alamitos. TJCIS PPs