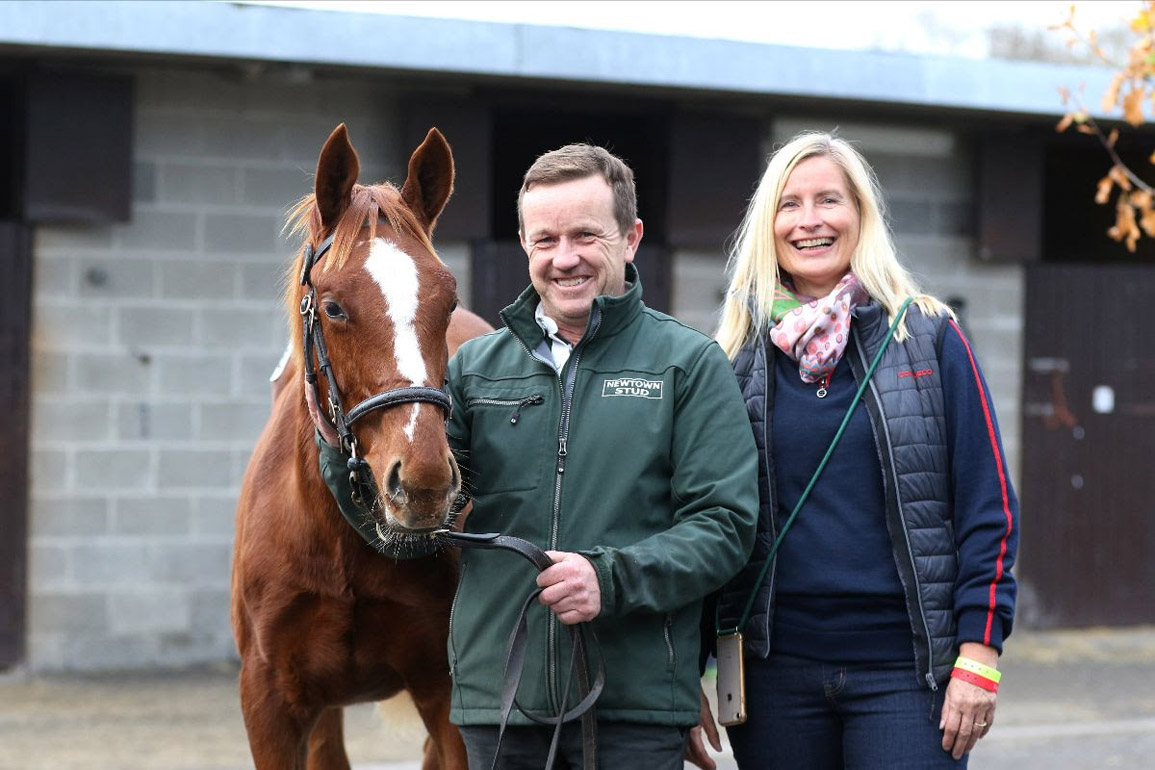 Heike Bischoff with the Frankel filly she sold for €550,000 | Goffs

KILDARE, Ireland–There was a palpable energy in the air at Goffs on Wednesday morning with the anticipation of some equine future stars changing hands, and so it proved with a daughter of the new king Frankel (GB) stealing the show when selling to Juddmonte Farms for €550,000. Being the strongest day of the four day foal sale, it was important that the gains made in the first half of the week were built on here and it was encouraging to again see trade maintain the strong pace initiated on day one. An 82% clearance rate was in line with the same day last year and while an aggregate of €11,756,000 and median of €52,000 (+4%) surpassed last year, the average of €72,568 (-4.3%) came up marginally short on the 2020 figures.

The sale topper, consigned by the Grassicks' Newtown Stud as lot 652 out of Sanwa (Ger) (Monsun {Ger}), could be regarded as a collector's item being a half-sister to Sea The Moon (Ger) (Sea The Stars {Ire}), a breathtaking winner of a G1 Deutsches Derby and a highly respected stallion, while Monsun (Ger)'s Group 1 winners Schiaparelli (Ger), Salve Regina (Ger) and Samum (Ger) all feature under the second dam. Furthermore, her 2-year-old full-sister Sea The Sky (Ger) (Sea The Stars {Ire})–who cost €820,000 as a yearling–broke her maiden at Chantilly earlier this month at the first time of asking for Andre Fabre. Speaking after purchasing the Heike Bischoff and Niko Lafrentz-bred filly, Juddmonte's Barry Mahon said, “She is a beautiful filly with an outstanding pedigree and it is not very often that a filly like her comes to the market. Obviously she is by Frankel, who has had a phenomenal year and she will eventually join the Juddmonte broodmare band. We're delighted to have bought her.

Bischoff admitted to mixed emotions after selling her filly.

“I am absolutely overwhelmed,” she said. “One side of my heart is of course very sad but the other one is happy. She has gone to a lovely owner and I hope they have loads of luck with her. It's a lot of money for a little foal–you can buy a house for that or even more–so you have to be happy. My knees were shaking and I wasn't sure if it was all the tea I was drinking at Sheila Grassick's office or my nerves, but I think it was my nerves. Goffs was a fabulous place to sell her and I am very grateful for the fabulous treatment here.”

👸 the team from @NewtownStud celebrate after lot 652 sells for €550,000 @Goffs1866. This filly by Frankel (@JuddmonteFarms) is a half-sister to Champion racehorse Sea The Moon who is now a successful stallion. She was bought by Juddmonte Farms. pic.twitter.com/GgiGYlgLlL

The Wardstown Stud duo of Mark and Elaine Clarke brought a fine son of Sea The Stars (Ire) out of their good producer Holda (Ire) (Docksider) to Goffs as lot 562, and they were well rewarded when the half-brother to GI EP Taylor S. winner Blond Me (Ire) (Tamayuz {GB}) was knocked down to Camas Park Stud for €270,000. The foal was bred in conjunction with the stallion's owners, Sunderland Holding, and for good measure was even led up in the sales ring by Mark Clarke himself. The pedigree can boast of producing a Group 1 winner in each of the first three generations, and a delighted Clark said afterwards, “It is a very special family day and we are so thrilled. He is a smashing horse and has all the attributes to ultimately make a great racehorse, and we wish the Hydes the best of luck with him. It's a big day for us, and it was a bit surreal leading him up. Even though it was a foal share, when the price starts heading towards a quarter of a million that's new territory to us so it really is exciting. We still have the mare, we also have a daughter of hers called My Brunette (Ire) (Arcano {Ire}) to breed from and even though Holda is not in foal at the moment we have plenty of options to consider for her next year.”

It also took a bid of €270,000 from Frannie Woods to secure another Sea The Stars (Ire) colt offered by Jacqui Norris's Jockey Hall Stud as lot 623. Sold on behalf of breeder Ling Tsui's Sunderland Holding, the colt is the second produce of the unraced Newton's Angel (Ire) (Dark Angel {Ire}) whose first foal, a full-sister to Wednesday's offering, was bought by U.S. investors Bridlewood Farm and Madaket Stables last year. The colt will likely reappear at a yearling sale next year for Rathbarry Stud with Frannie Woods commenting, “He is a lovely foal, we've been trying to buy a Sea The Stars for a number of years so now we've finally got one, let's hope everything goes well with him. I didn't think I'd have to stretch so far to get him and hopefully the sister in America might do us a turn in the meantime. The market is strong, which isn't a surprise after the yearling sales and the nice ones are not easily bought.”

One of the bravest pinhookers in the business, Philipp Stauffenberg, was back in town arming himself for next year's yearling sales and among his purchases this week was a Night Of Thunder (Ire) filly, lot 687. Bought for €240,000, the filly was offered by Oghill House Stud out of the G3 Prix Miesque winner Sweety Dream (Fr) (Dream Ahead). “She is a lovely, strong, precocious-looking filly with great movement and I am delighted to have gotten her,” Stauffenberg said. “The dam was a group winning 2-year-old so this filly has every chance of being a smart, early type. The market is quite strong but I am happy that breeders are being rewarded as they work very hard producing these lovely horses,” he added.

Another very shrewd pinhooker who isn't afraid to spend big on the right article is Michael Fitzpatrick of Kilminfoyle House Stud and the Laois man paid €215,000 for a Blue Point (Ire) colt offered by Limekiln Stud as lot 711. The foal is out of the Galileo (Ire) mare Wild Child (Ire) whose yearling filly by Camelot (GB) was bought by Kenny McPeek in the Orby Sale for €200,000.

The 17-year-old mare Noyelles (Ire) (Docksider) has been very good to Nick and Alice Nugent since the couple bought her for €22,000 in France 14 years ago, and the mare came up trumps again when her Frankel (GB) colt, consigned by Neilstown Stud as lot 626, sold for €210,000 to the Nugent's neighbor Eddie O'Leary's Lynn Lodge Stud. Noyelles is already the dam of two stakes winners and with two young Frankels on the ground and a 2021 Kingman (GB) covering, she could well add to that tally in the coming years.

The solitary Kingman (GB) foal on offer at Goffs this week had a dam-line to match his brilliant paternal influence, being a Moyglare Stud-bred and offered son of Majestic Silver (Ire) (Linamix {Fr}), making him a half-brother to stakes winners Carla Bianca (Ire) (Dansili {GB}) and Joailliere (Ire) (Dubawi {Ire}). Lot 598 will return to a sales ring next autumn after being knocked down to Mick Flanagan on behalf of Baroda Stud for €200,000.

“He is a lovely horse with plenty of quality and substance, but as an April foal he should develop more over the winter,” said Baroda's David Cox. “He's a good mover and comes from a great family and we look forward to reselling him next year,” he added.

Ballylinch stallion New Bay (GB) is threatening to make the leap into elite territory and he has a big fan in the WH Bloodstock team of Mimi Wadham and Violet Hesketh. The pair combined with Brendan Holland's Grove Stud to acquire lot 554 for €200,000. The New Bay colt out of the G2 Queen Mary S. placed Hairy Rocket (GB) (Pivotal {GB}) is a half-bother to smart Ballydoyle juvenile The Acropolis (Ire) (Churchill {Ire}) and was offered by The Castlebridge Consignment. “We love New Bay and this is one of the nicest we have seen by the sire,” Wadham said. “He is a really sharp, active colt and he showed himself well each time we saw him. He will be for resale next year,” she added.

When lot 642, a Phoenix Of Spain (Ire) half-sister to Lucky Vega (Ire) (Lope De Vega {Ire}) stepped into the ring it was no surprise to see both BBA Ireland's Mick Donohoe and Goffs Scandinavia agent Filip Zwicky emerge as bidders on the Baroda Stud-consigned filly, given their respective involvement with the foal's siblings. It was Donohoe who selected the G1 Phoenix S. winner and rookie Irish National Stud stallion Lucky Vega in this ring at the Orby sale a few years ago, while Zwicky famously pinhooked the Footstepsinthesand (GB) half-brother who made €630,000 to Donohoe's bid at this year's Orby. However, when it came down to the business end, it was Donohoe who won the battle when landing the filly for €195,000. “She is for Yulong Investments and will stay in Ireland to be trained by Jessica Harrington,” Donohoe revealed. “She reminds me very much of her siblings and given the success we have had with the family already I thought she made a lot of sense. Mr. Zhang is very excited about Lucky Vega's stallion career and hopefully this filly will do well for him.”

Early fireworks were provided when a daughter of Ballylinch stallion Waldgeist (GB) from Des Leadon and Mariann Klay's locally based Swordlestown Little Stud stepped into the ring. The late May-born filly out of the stakes placed Ezalli (Ire) (Cape Cross {Ire}) was the subject of a spirited bidding battle but it was Clare Manning of Boherguy Stud who proved successful for lot 534 when the hammer dropped at €180,000. “I've bought her to race and she will carry my granny Jackie Bolger's colours. My granda trained Ezima (Ire) (Sadler's Wells), who is under the second dam, so it's nice to get back into the family,” Manning said.

Swordlestown Little has enjoyed some magnificent returns in this sales ring and a delighted Des Leadon commented, “Mariann and the team did a brilliant job prepping her and she is a classy filly with a lovely temperament. The stallion is both exciting and interesting and we just feel honoured to be involved with such a lovely dam-line that includes the likes of Taghrooda (GB) (Sea The Stars {Ire}) and Estimate (Ire) (Monsun {Ger}). I am particularly proud that Estimate is on the page because I have been a great friend of Sir Michael Stoute for a long time. I'm delighted the filly is going to such a good home and I remember Eddie Lynam, who trained the dam, saying Ezalli was very fast so hopefully that bodes well for the foal.”

The final day of foal action takes place on Thursday when trade is set to resemble the earlier part of the week.