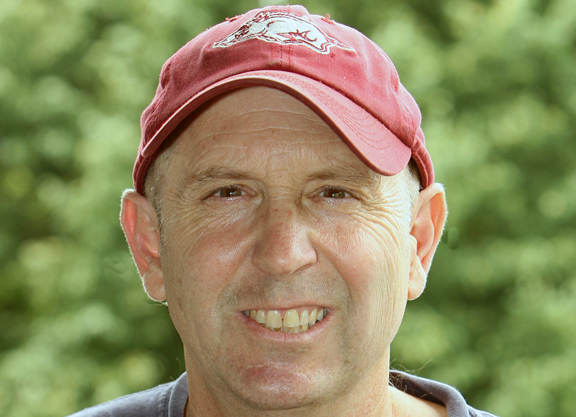 John T. Botty, a retired and well-respected New England trainer known for his attention to detail, patience, and knack for developing young horses, died suddenly Apr. 30 after suffering a stroke.

Botty was 65 and lived in Pelham, New Hampshire. He had remained active in the sport as a bloodstock consultant after stepping away from daily work under racetrack shed rows in 2015.

For the better part of three decades, Botty, together with his wife of 32 years, Kathleen, ran a successful, mid-sized racing stable based out of Suffolk Downs and Rockingham Park. Kathleen owned some of the horses, but Botty also trained for other long-standing clients, and he was skilled at acquiring and developing horses on a modest budget and getting them to outperform expectations.

His best training years statistically were in the 2000-10s decades, when both Sassy City and Lovethatdirtywater were crowned with Horse of the Year honors as voted by the New England Turf Writers Association. In 2012, Botty was honored by that same organization with the Lou Smith Award for contributions to New England racing.

Beyond the 333 lifetime training wins he earned starting in 1987, Botty was known as a friendly backstretch face who was quick with a kind word, and he was emphatic about the concept of Thoroughbred aftercare long before that way of thinking became embraced as an organized industry movement.

Botty, a Massachusetts native who had graduated from Syracuse University, was one of the few New England trainers to occasionally venture away from the circuit to race at top-tier racetracks like Keeneland or Oaklawn Park, and the serendipitous tale of an 11-for-34 racemare named Our Revival epitomizes what Botty was all about, both as a person and a horseman.

Botty often described the hard-hitting Our Revival as a “street fighter,” and on Apr. 14, 2005, he shipped her to Keeneland. Just before the race, Botty ran into New England transplant Michael Blowen, who had parlayed his volunteer work on the backstretch of Suffolk Downs into founding the Old Friends retirement farm in Kentucky.

Botty handed Blowen a $50 win ticket on Our Revival. According to a subsequent Boston Globe story, he said he liked his mare's chances, and if she won, to donate the money to Old Friends.

That type of generosity wasn't unusual for Botty. But Blowen knew Botty was not the type of trainer who usually touted his own horses, so he figured the mare must really have a good shot.

Now fast-forward a few years. Our Revival retired in 2007 and was sold twice at Keeneland as a broodmare. But by 2012 she was entered to be sold at an auction in Texas frequented by “kill buyers.” When Botty found out, he, along with a network of other helpers across the country who donated time and money, arranged for a last-minute acquisition to keep her from going to slaughter.

Botty contacted Blowen and said, “if you got a place for her, I'll get her out of there, whatever it takes to save her, because she's a beautiful animal. She shouldn't end up like that,” Botty told the Globe while deflecting most of the rescue credit to the team of “guardian angels” who spotted Our Revival at the sale.

Botty arranged for a horse van from Oaklawn to go get the chestnut mare with the distinctive white blaze in Texas and deliver her to Old Friends, where she lived a well-cared-for life until passing away in 2018.

Botty's memorial service is scheduled for May 10 in Massachusetts; details are here.

To honor Botty's memory, surviving family members are asking for donations to Old Friends via this online portal.