Joe Migliore Goes All In as Bloodstock Agent 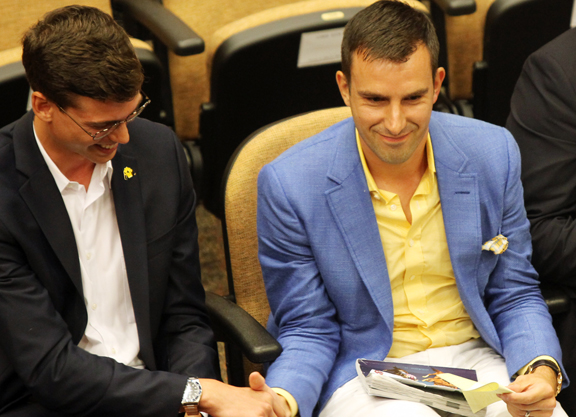 Joe Migliore never really considered a career outside of racing. With an Eclipse Award-winning jockey as a father and a mother who worked as an assistant trainer, to him, the sport was always more than just a popular topic at the dinner table.

“I think it was pretty much ingrained from day one that this is the place I wanted to be,” Migliore said. “It definitely started at the racetrack. I rarely had a day where I thought of anything else.”

Migliore first developed his passion for the sport by following his father, now-retired jockey and current America's Day at the Races analyst Richard Migliore, around the New York racing circuit.

“It was special because you're so invested in a specific athlete's performance, and it's your father so it's obviously someone you idolize and it kind of heightens everything about each race,” he explained. “Each high and low was a little bit more amplified because, you know, it's your dad out there. I learned about horses from him, but also my mother, Carmela, was an assistant trainer for two decades. So having two parents that were both racetrackers definitely accelerated the learning process.”

As a child, the younger Migliore dreamed of following the “The Mig” in becoming a top jockey, but after surpassing six feet in height, he turned his attention toward other career options.

This year, Migliore is setting out to form his own bloodstock agency, a dream he has had for years.

“I remember pretty early on as a teenager being able to shadow a couple of bloodstock agents at Saratoga's Select Sale and feeling the electricity at that sale,” he said. “Each sales ground has a little bit of a different vibe, but it's the same process being employed at each sale. For me, there was always a big draw to the electricity of finding the next very talented horse.”

As a teenager, Migliore walked hots for Mike Hushion and John Kimmel at Saratoga while working in NYRA's Communications Department in the afternoons. After college, he graduated from the Irish National Stud Breeding Course.

“That was a great chance for me to widen my perspective on the industry and really get into more of the breeding elements and the global aspects of what our industry is about,” he explained. “I met a lot of great friends there and was able to parlay that into working down in Australia after I finished the course.”

Following his return to the States, Migliore worked as a sales associate for West Point Thoroughbreds for six years.

“West Point is such a tremendous team and there's such a family atmosphere there,” Migliore said. “I learned so much about syndications and partnerships, but specifically, you're dealing with a variety of owners and when you have a partnership the size of West Point, that really accelerates the number of people that you deal with and the number of reactions you see.”

Migliore said a milestone this year was the push he needed to set off on his own.

“I'd gotten to a point where I felt I had seen everything I wanted to experience from the syndication side of the game and I've started to really make some strong connections with owners that were willing to give me an opportunity,” he said. “I just turned 30 and it felt like the timing was right. I felt like I had done everything I needed to prepare myself for this next step and with the support of some great owners, I'm hoping that I can turn this into a bloodstock agency that flourishes.”

One important connection made at West Point was with owner Robert Masiello.

Coming off a three-length win over allowance company in July as a 3-year-old, the gelding was purchased by Masiello for $400,000.

“We watched his replays and immediately said this was a horse we needed to learn more about,” Migliore recalled. “We paid a lot of money for him, but I think at the end of the day, when good horses show themselves on the racetrack, you're going to have to pay a lot of money for them.”

The duo was rewarded when Fiya went on to stay undefeated as a sophomore last year, taking an allowance at Belmont before stepping up to stakes company to win the Maryland Million Turf Sprint H. and the Claiming Crown Canterbury S.

“He's heading into 2021 with a big head of steam,” Migliore reported. “Hopefully you'll see him in the GI Jaipur S. on Belmont Day. That's kind of our big, early-summer goal.”

When the 2-year-old sales season kicked off this year at the OBS March Sale, Migliore was active on the grounds.

“OBS ended up being a very solid market,” he said. “It was very hard to buy the obvious good works or the obvious strong physicals. Those horses were making far greater than fair value and I think it's a market the sellers should be happy with. It made it a challenge from my perspective as the first sale working on my own, but I was happy to come away with one.” 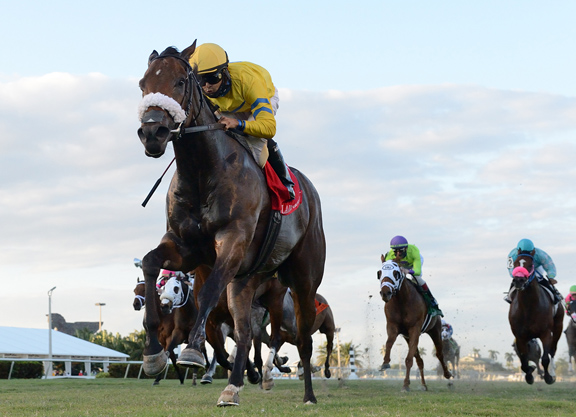 On the second day at OBS, Migliore went to $145,000 to purchase Hip 365, a More Than Ready colt from the Niall Brennan consignment, for owner Glenn Del Russo.

“The way the sale went, I think this horse was really well bought for the money,” Migliore noted. “He has a strong female family and with More Than Ready being a sire that puts great versatility into them, I think we bargain-hunted very well.”

Migliore said he plans to be back in action next week at the Fasig-Tipton Gulfstream Sale.

“It's obviously a high-end, boutique sale so you're going to have all the heavy hitters there as well,” Migliore said. “I'm hopeful that I can find something for Rob Masiello, but at the same time, neither of us are looking at it like it's do or die. If something falls to what we think is the right price, you'll see our name on the ticket, but if not we still have April and further sales down the road. In this market, it's more challenging now as a buyer, but that just means we're going have to go out there and do work that's twice as good.”

When shopping at the sales, there are certain characteristic Migliore looks for in his prospects.

“For me, there's a lot weighted on their hind end,” he said. “You need to see a lot of strength there. For U.S. dirt racing, that's the key element of a horse's conformation that I would look for. I think first impressions are something I've been trying to lean on, you know, that horse that really catches your eye almost instantly. That's the horse I hope to gravitate towards and not get too into the nitty gritty of trying to fault them rather than trying to find something you like about them.”

While in Ocala for the OBS Sale, Migliore's mother Carmela tagged along to watch her son in action.

Carmela said her son's attention to detail is one reason why she believes he will be successful in this new venture.

“Even just from spending the last few days with him, I'm very impressed,” she said. “I love the fact that he has so many different levels of exposure. He totally encompasses everything about the game. Of course, we all want to make money in this business, but he really, truly enjoys it. It's in his blood and he was really made for this.”

Asked about his long-term goals as an agent, Migliore replied, “I'll be really happy if I can service each individual owner to create an experience for them that is as close to exactly what they were looking for when they got into this industry as possible. I think it's my job and my role to get them to the place they want to be, and not really tell them what they should be doing. If I can fulfill that experience and make some lifetime memories at the racetrack for people, I think I've done my job.”

To be a successful agent, Migliore knows he must rely on his people skills just as much as his horse sense. He credits West Point's Chief Operating Officer Tom Bellhouse for helping him develop such an aptitude.

“Tom is a guy that really taught me not so much about horses specifically, but how to deal with people and conduct myself in the industry,” he said. “Tom and I have a great friendship and if I hadn't learned some of the things I learned from Tom, I definitely would not be ready for what I'm trying to do now.”

Later this summer, Migliore's work will come full circle as he returns to Fasig-Tipton's Saratoga location, where he first discovered his passion for the sales.

“The one sale that I'm really excited to work this year and I'm going to have a big focus on is the Fasig-Tipton New York-bred Yearling Sale,” he said. “It's a sale that I've really enjoyed in the past and I've been able to find some nice New York-breds there.”

When he's not studying pedigrees and past performances, Migliore enjoys playing a game of poker, once placing 97th overall in the World Series of Poker. Quite the feat for someone who was in their twenties at the time, but compared to picking out the next GI Kentucky Derby winner, making a run in a poker tournament seems relatively simple.

“Looking at horses is a subjective process, right?” Migliore questioned. “Yes, there are conformation elements that you need to know, but at the end of the day, we all have a certain taste or a certain opinion of what a horse may or may not be. To me, that's one of the most exciting parts of our industry, is that it's not a game that can be solved. The sales are kind of where everybody lets their chips fall and we find out years down the line who made the right decision.”

For Joe Migliore, that just adds to the appeal.