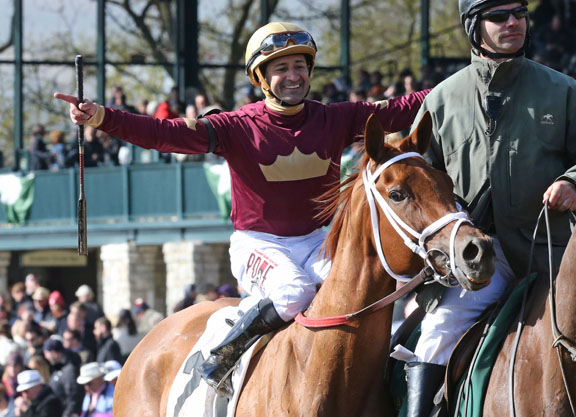 With a court having denied a motion to stay a New Jersey Racing Commission (NJRC) regulation banning the use of the whip, racing at Monmouth is set to get underway under the tightest rules in the nation regarding the crop. But whips may not be the only thing missing on opening day May 28.

At least three jockeys have said that, because of the whip ban, they will not ride at Monmouth this year. Jockeys across the country have come out against whip restrictions, saying that the crop is a necessary tool and that banning them outright would lead to dangerous conditions.

“Under these conditions, no, I don't think I can ride at Monmouth Park,” said Joe Bravo, who has been leading rider at Monmouth 13 times.

Jockeys Antonio Gallardo and Daniel Centeno took to Twitter to announce their decision to not ride at Monmouth this year.

“I have to say something important: I left Presque Isle a few years ago and went to Monmouth, I did very well,” Gallardo tweeted. “It's my second home after Tampa and it's so sad to change my plans just because they put a stupid rule into practice so I can't go back.”

Centento Tweeted: “I was so excited to go back to Monmouth but with that rule they put I can't GO!!! I have to change my plans!!!”

Bravo was third in the standings for the main Monmouth meet last year and Gallardo was fourth. Centeno has not ridden regularly at Monmouth since 2015.

Veteran rider Chris DeCarlo also took to Twitter to express his opinion, but did not say if he intended to ride at Monmouth this year or not.

“NJRC really trying to kill Horse Racing,” he wrote. “Jockeys can't fight and do this alone. Everyone that has a vested interest in racing in NJ should step up to the plate and voice their concern to get this overturned.”

In September, the New Jersey Racing Commission issued rules governing the use of the whip. To take effect with the opening of the 2021 Monmouth meet, jockeys will not be allowed to use their whip unless it is needed for safety reasons. The Jockeys' Guild took the issue to court, but it was announced earlier this week that their request for a stay had been turned down. The Guild plans to appeal that decision, but an appeal is not expected to be heard prior to opening day at Monmouth.

“When they first proposed this last year, I just couldn't fathom having races without any way to encourage the horse” Bravo said. “It passed and we appealed. I kept thinking there is no way they could put this in place. Monday, they denied our appeal. We're facing the fact that in a couple of weeks there is going to be an opening day at Monmouth Park and they will be expecting us to ride under these conditions.”

When announcing the rule change, the commission issued a statement saying the new rule was necessary because of public perception issues.

“The prohibition of the use of riding crops, except when necessary for the safety of horse or rider, will be perceived in a positive light by the general public,” said the statement. “The proposed repeal and new rules are of the utmost importance in adapting the industry to avoid the currently negative public perception of whipping a horse.”

Bravo said that after the court's decision was announced, the Board held a conference call in which the New Jersey riders were given an update.

“I'll put it this way, no one on that call said they were willing to ride there under these conditions,” Bravo said.

Bravo voiced a common theme among the Monmouth riders, that the NJRC took these measures without bothering to consult with the Guild or any of the local riders.

“They didn't even speak to any of the New Jersey jockeys and ask what are your thoughts?” Bravo said. “In today's era, yes, there should be riding crop restrictions. I understand that. They have them at Delaware, at Tampa and in California. We have no problem with that. But to take the whip away completely away…that's crazy. Show me another country in the world with major racing that has these conditions.”

Bravo did not say where he intended to ride this summer, but one option would be Gulfstream Park, where he is currently riding.