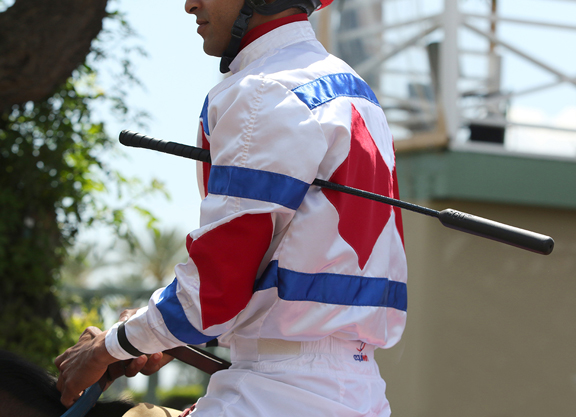 In light of the New Jersey Racing Commission (NJRC)'s decision and applicable new regulation to eliminate the use of the riding crop but for safety purposes in Thoroughbred racing, the Jockeys' Guild has retained the services of Rivkin Radler LLP in Hackensack, N.J., to take legal action. A notice of appeal of the Commission's new regulation was filed on Nov. 5, 2020, in the Superior Court of New Jersey, Appellate Division.

As the organization representing jockeys throughout the U.S., the safety of both equine and human athletes are paramount and of the upmost importance to the Jockeys' Guild. According to the organization, the Jockeys' Guild and its members are adamantly opposed to any animal abuse, and any person who does so should be fully punished for such occurrences. However, the jockeys must be afforded the discretion to use the riding crop in a responsible manner to safely control the horse and do what is in the best interest of the integrity of the sport.

A Steward will determine when a jockey has violated the new rule and the extent of the fine or sanction, which Jockeys' Guild believes is unfair and subject to enhanced–not reduced–safety concerns. “We strongly believe the rule adopted by the New Jersey Racing Commission will have serious consequences and could result in even greater risks and dangers for both the horses and jockeys,” said Guild Co-Chairman, John Velazquez. “There are many instances when we need to be able to use the riding crop to prevent a dangerous situation from occurring that is not able to be seen or known by those who are not on the horse's back. While purported to focus on the welfare of the horse, by not considering these instances, the new rule actually disregards the safety of the jockey and the horse.”

The Guild is extremely disappointed by the actions taken by the NJRC. The Guild believes its comments and concerns were not considered and that the NJRC insisted on rushing to adopt a rule that the Guild strongly believes is not only unsafe for the horse and jockey, but also a dangerous precedent and inconsistent with any other jurisdiction in the U.S.

“We believe the Commission failed to have any meaningful dialogue or recognize any input from us as the jockeys who are risking our lives,” said Guild board member and long-time New Jersey jockey Joe Bravo. “We feel that the Commission completely ignored our pleas for compromise, which is disrespectful and disheartening.”