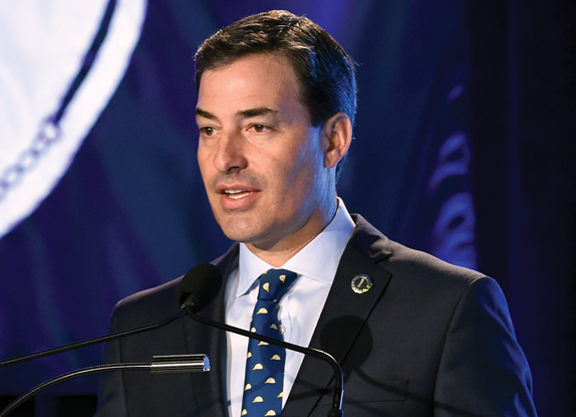 Alleging that a lawsuit by three Kentucky stud farms over the 140-mare stallion cap is “based on groundless and contradictory fortune telling,” The Jockey Club (TJC) filed a motion in federal court Mar. 29 asking the judge to dismiss the complaint, which seeks to have the breeding limit repealed and to award an unspecified amount of damages that the plaintiffs want paid in triplicate.

According to Monday's filing in United States District Court, Eastern District of Kentucky (Central Division), Spendthrift Farm, Ashford Stud and Three Chimneys Farm are suing TJC and Kentucky Horse Racing Commission (KHRC) officials Jonathan Rabinowitz and Marc Guilfoil “because they want the option to overbreed a hypothetical, wildly popular, future Thoroughbred stallion if they obtain one. And if that stallion covers over 140 mares in a given breeding season, they want this Court to force TJC to register each resulting foal as a Thoroughbred.”

The motion to dismiss continues: “Plaintiffs' Complaint is pure conjecture, alleging speculative and hypothetical theories as facts and conjuring injuries that may never come to be.

“So despite throwing a pot with a melange of undercooked pasta varieties at the wall, none sticks.

TJC cited the significant, decades-long decline in the North American foal crop and concerns “with the narrowing of the diversity of the Thoroughbred gene pool,” in implementing this new policy, which was met with a hazy mixture of consternation and support within America's bloodstock community.

On Feb. 23, 2021, Spendthrift, Ashford and Three Chimneys Farm sued to keep the rule from going forward and to collect alleged damages. The complaint called 14C a “blatant abuse of power” that acts as an “anti-competitive restraint” and threatens to disrupt the free-market nature of the breeding business.

“Alleging these meritless claims, Plaintiffs seek a multitude of damages…for entirely speculative injuries and a series of injunctions whose scope bears no relation to those alleged injuries and could result in the cessation of Thoroughbred racing in Kentucky.”

In greater detail, the motion to dismiss explains that “First, the KHRC did not delegate power, constitutionally or otherwise, to TJC. The Kentucky General Assembly, not by the KHRC, decided in 1960 to statutorily reference TJC's Thoroughbred registry. And the statutory scheme delegates no power. It is well established that a state does not delegate legislative power by making a statutory reference to a private breed registry.

“Second, TJC's decision was not unconstitutional. Not only have Plaintiffs failed to allege that TJC, a private breed registry, is a state actor as would be required for TJC to deprive Plaintiffs of their constitutional rights, but there is no constitutionally protected 'right to race.'

“Finally, the antitrust laws protect competition, not competitors. An antitrust plaintiff must demonstrate antitrust standing, which ensures that the purported injury is one that the antitrust laws are intended to redress. Plaintiffs cannot make any such showing as their speculative and theoretical injuries at best may reflect the potential for harm to themselves, but not to competition.”

“Plaintiffs brought this lawsuit alleging purely speculative economic hypotheses to maintain the option of overbreeding future stallions,” TJC contends in its filing. “Plaintiffs do not allege that they own a single stallion that has been prevented from covering a 141st mare, that they will own a stallion that will be prevented from covering a 141st mare, or that a future stallion could not travel overseas to continue covering mares in the Southern Hemisphere after covering its 140th U.S. mare.

“Nor could they; Rule 14C only applies prospectively in the United States and Canada to preserve the health of the Thoroughbred breed for the long term.”

In a separate filing, the two KHRC defendants filed an answer to the complaint requesting that it “be dismissed, with prejudice [and for the granting of] any and all other relief to which they may appear entitled.”