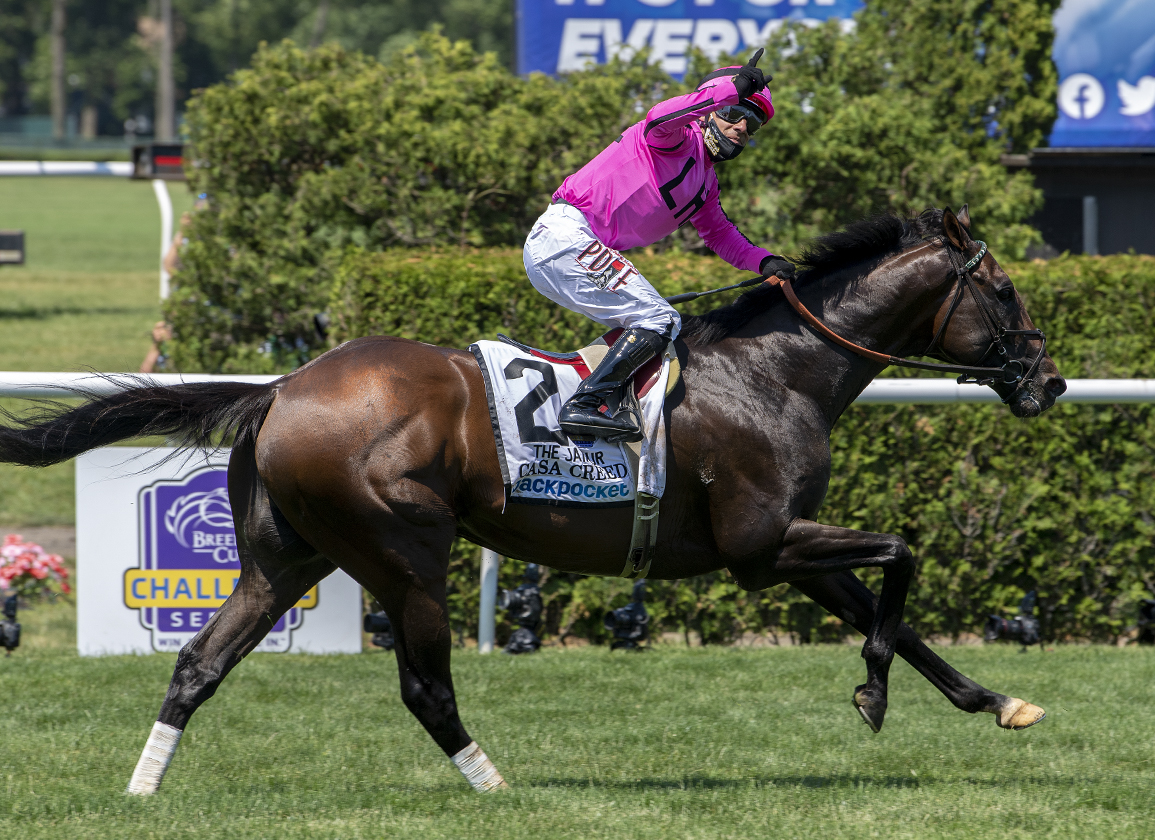 There appeared on paper to be a lack of pace in Saturday's GI Jackpocket Jaipur S., but that could only mean one thing–the two back markers, Bill Mott pupils Casa Creed (Jimmy Creed) and Chewing Gum (Candy Ride {Arg}), flew home from out of the clouds to cap a near $168 exacta for a buck. With the victory, Casa Creed also earned an automatic berth into the GI Breeders' Cup Turf Sprint this fall. Even-money favorite Bound for Nowhere (The Factor) could only manage third after being pestered on the lead.

Off last and scrubbed on to keep pace, Casa Creed passed Chewing Gum early on as he traveled in the two path behind splits of :22.06 and :44.65. Still with lots to do at the head of the lane as Bound for Nowhere seemed to still have horse, Casa Creed began to inhale foes down the center of the track. He seemed to take announcer John Imbriale by surprise as he blew past the leader near the sixteenth pole, and Chewing Gum mirrored that one's move to make it all about Mott.

“[Casa Creed] ran great,” said Mott, who had won the Jaipur three times previously. “It looks like sprints suit him, for sure.”

Casa Creed had been competing primarily in turf miles, and took the seven-furlong Elusive Quality S.–named for one of Mott's prior Jaipur winners–here Apr. 24.

“I missed the break a little,” winning pilot Junior Alvarado admitted. “I got worried right away because when sprinting the last thing you want to do is break slow. The first sixteenth of a mile, I was last and he was going so fast. I was thinking that they had to be going pretty quick up front. He started picking it up little by little and still going so fast. As soon as I turned for home and put him in the clear, I asked him a bit and then he pulled the reins out of my hands. It was a beautiful run from the three-sixteenths to the wire.”

Alvarado continued, “He's versatile. He's been unlucky with races, but he's always been hard knocking. He gets beat, but gets beat trying against really nice horses. We started figuring it out these past couple of races. He showed today that he's a serious sprinter.”

Casa Creed's prior career highlight came when he took the GII National Museum of Racing Hall of Fame S. in 2019. He went winless last year with a third in the GI Fourstardave H. and 12th in the GI Breeders' Cup Mile. Second in Gulfstream's GIII Tropical Turf S. again over eight panels Jan. 9, the bay was a close sixth in the GI Frank E. Kilroe Mile S. at Santa Anita Mar. 6 before ending his winless drought in the Elusive Quality.

Florida-based breeder Loren Nichols bought dam Achalaya for $15,000 while she was carrying Chess's Dream at the 2018 OBS Winter Mixed Sale. He bought her back for $195,000 at KEENOV '19 while she was carrying a Distorted Humor colt. Achalaya, a daughter of MGSW turfer Wild Heart Dancing from the family of GISW Man from Wicklow (Turkoman), most recently visited Omaha Beach.