Jewels On Display At Kyoto 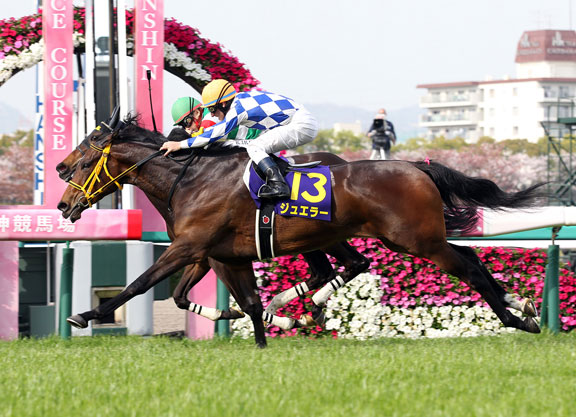 Sunday's G1 Shuka Sho, the final leg of the Japanese Fillies' Triple Crown, may have lost some of its lustre with the defection of Oaks winner Sinhalite (Jpn) (Deep Impact {Jpn}) and Group 1-winning miler Major Emblem (Jpn) (Daiwa Major {Jpn}), but the 2000-metre contest still boasts a gem in the form of G1 Oka Sho (Japanese 1000 Guineas) scorer Jeweler (Jpn) (Victoire Pisa {Jpn}). Jeweler is on a recovery mission here, however, having finished 11th on her seasonal return in the G2 Rose S. Sept. 18, but trainer Kenichi Fujioka put that effort down to the yielding track, and described the filly as “very well” off a work at Ritto Training Centre Oct. 5.

Another key Shuka Sho prep is the G3 Shion S., and the top three from that contest re-engage in battle here. Oaks third Biche (Jpn) (Deep Impact {Jpn}) closed from the back of the pack to be an eye-catching winner of the Shion Sept. 10, while Vivlos (Jpn) (Deep Impact {Jpn}) looks a filly capable of improvement off her second-place finish there. She has finished first or second in all six starts, and has won over this course. Shion third Frontier Queen (Jpn) (Meisho Samson {Jpn}) is seeking a first black-type win but has been mixing it with the top fillies of her generation all year, and gets the services of jockey Masayoshi Ebina, who won this in 2010 with Fillies Triple Crown winner Apapane (Jpn) (King Kamehameha {Jpn}).

Another live longshot is Shadai's Kaiserball (Jpn) (Empire Maker), a daughter of Oka Sho winner Dance In The Mood (Jpn) (Sunday Silence). An 1800-metre Hanshin allowance winner Mar. 26, she looks for her first stakes win coming off a third in the Rose S.