Jetting In For The Fresh Prince Of The Ring 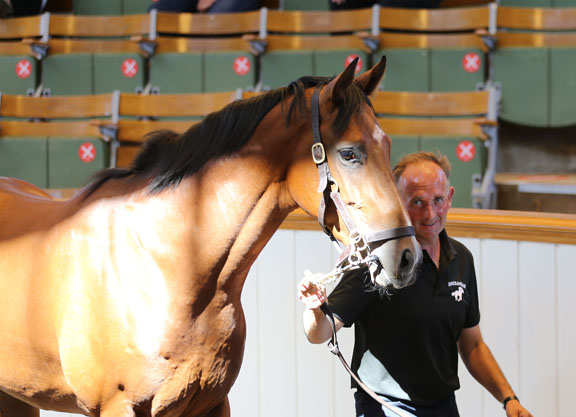 The sale-topping colt by Prince Of Lir | Laura Green/Tattersalls

NEWMARKET, UK—There may have been one significant Prince Of Lir (Ire) colt missing from those originally consigned for the Tattersalls Ascot Breeze-up but the Ballyhane Stud resident still made his presence felt as the sire of three of the top eight lots of the sale.

The G2 Norfolk S. winner The Lir Jet (Ire) was withdrawn by Robson Aguiar and sold privately ahead of the delayed auction but that hold up has worked in other people's favour. Heading the list of those who found themselves in the ring on Thursday afternoon was lot 13, the colt from Knockanglass Stables out of the listed-placed juvenile winner Harvest Joy (Ire) (Daggers Drawn), who sold for 92,000gns to Mark McStay of Avenue Bloodstock.

“He's a lovely horse and we are delighted to have bought him,” said McStay, who was acting on behalf of a group of owners with Joe Parr, who is in his first season training in Newmarket.

“We thought he was one of the nicest horses on the sales ground and he compared very favourably with those in the Craven Sale, both on type and on the time he did for his breeze. He was prepared very well by Thomond O'Mara, who recommended him highly.”

Bred by John Hutchinson, the colt was bought by O'Mara for €10,000 at the Goffs February Sale.

McStay added, “He might have been considerably cheaper ten days ago had it not been for The Lir Jet but we hope he might be the next one. The horse is eligible for the new Ballyhane Stakes at Naas so hopefully he can go over and win some of Joe Foley's money.”

Peter Swann was the man who raced Prince Of Lir—a Norfolk S. winner and breeze-up graduate himself—and, while Swann had to play the role of underbidder on the sale's top lot, he picked up number two on the list, another colt by the sire for whom he has an understandable fondness. Sold for 70,000gns, lot 23 was consigned by Mickey Cleere of MC Thoroughbreds. A son of the six-time American winner Little Italy (Proud Citizen), he was bred by Gerard Mullins.

Matt Coleman did the bidding on behalf of Swann's Cool Silk Partnership and said, “We missed out on The Lir Jet but Peter was very keen to buy a Prince Of Lir colt for Robert Cowell to train as he also trained the sire.”

Prince Of Lir ended the sale as the leading sire with an average of 44,800gns for five sold.

The Cool Silk team also picked up a first-crop son of Pearl Secret (GB) (lot 85) for 45,000gns and ended the sale as leading buyer with three bought for 130,000gns. The Pearl Secret colt was another with particular significance for Swann as he is out of Bertorizzia (Fr) (Bertolini), an unraced half-sister to Cool Silk's GI QIPCO British Champions Sprint winner Sands Of Mali (Fr) (Panis), himself a £75,000 purchase from the second edition of the Ascot Breeze-up Sale.

Despite a much denuded catalogue—after 39 withdrawals only 57 juveniles were offered for sale—the figures for what is usually the breeze-up season opener held up pretty well. Fifty horses (88%) sold for a total of 1,000,440gns, for a 21% improvement in the median to 15,750gns and an average which held steady at 20,009gns.