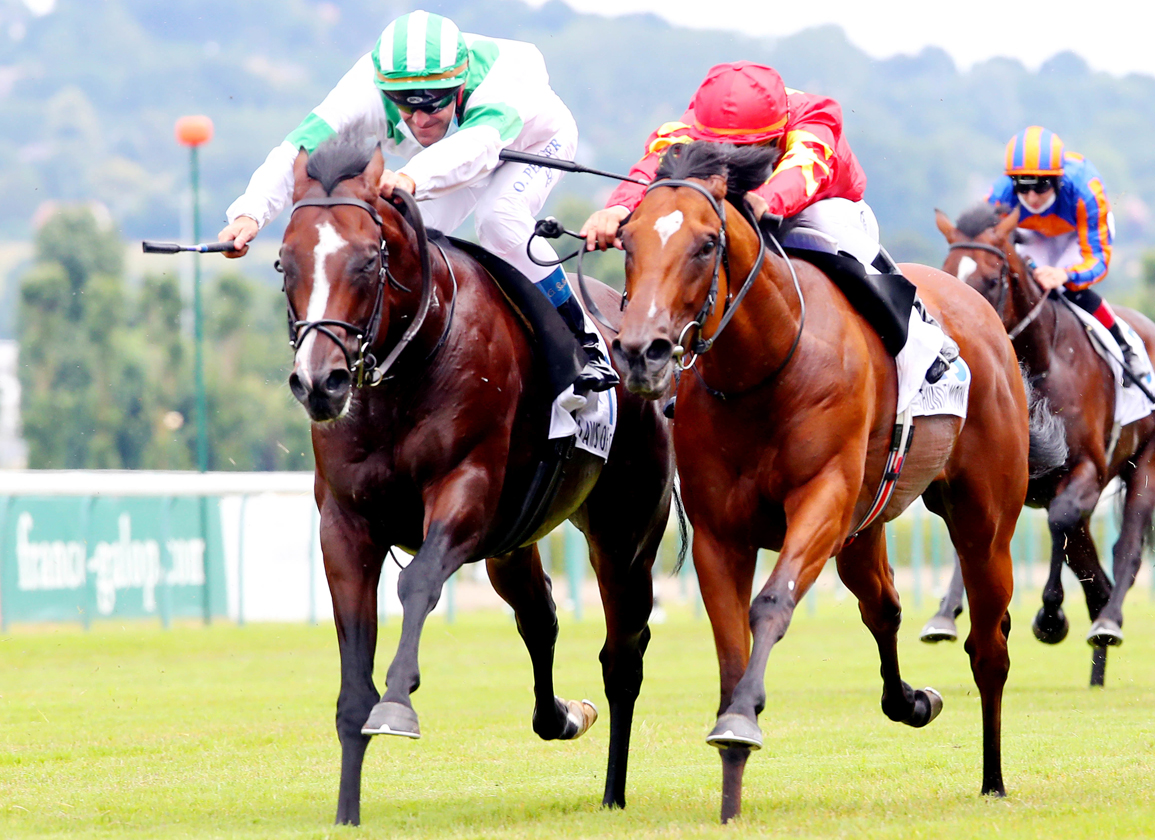 Unexposed at this seven-furlong trip and staying on in eye-catching fashion when fifth in the G1 Commonwealth Cup at Royal Ascot June 18, Charlotte Holmes's G2 Railway S. winner Laws of Indices (Ire) (Power {GB}) benefitted from a masterclass of front-running riding from Olivier Peslier to take Sunday's G1 Haras d'Etreham Prix Jean Prat at Deauville. Sent off at 29-1, the Ken Condon-trained bay quickly established a comfortable lead racing up the centre and saw off one by one the threats of the fillies Reina Madre (Ire) (Kingman {GB}) and Valloria (Fr) (Dubawi {Ire}) and the highly-regarded Andre Fabre-trained 31-10 favourite Midtown (GB) (Dubawi {Ire}) heading to the furlong pole. The last to throw down a challenge was the TDN Rising Star Thunder Moon (Ire) (Zoffany {Ire}) and that was the sternest of all, but his compatriot who had beaten him by almost six lengths on livelier ground in last year's G1 Goffs Vincent O'Brien National S. just couldn't get past in a frantic finish. At the line, there was a head between the Irish colts, with the previously unbeaten Midtown 1 1/2 lengths away in third justifying Fabre's belief on a tough seasonal introduction. “The trainer left it to me and I said I'd see how the race unfolded, but he was well-placed and I didn't hesitate to go on,” commented Peslier, who was registering a fifth win in the race in which he had enjoyed his first group 1 success on Le Balafre (Fr) (Groom Dancer) in 1993. “I had a lot of confidence in the horse and in me and it really paid off. He was very courageous and I'm delighted, as beforehand it didn't look like he had a chance on form.”

One of the surprise packages among the Irish juveniles last term, Laws of Indices broke his maiden over an extended five furlongs at Navan in June before beating Lucky Vega (Ire) (Lope de Vega {Ire}) when 66-1 for the six-furlong Railway at The Curragh. Fourth behind that rival in the G1 Phoenix S. over the same course and distance in early August, he was seventh tackling this trip for the first time in that venue's National S. in September and 8 3/4-lengths third behind Sealiway (Fr) (Galiway {GB}) in ParisLongchamp's G1 Prix Jean-Luc Lagardere in October. Carrying a three-pound penalty on his first two starts this season, he was fifth again at this trip behind Poetic Flare (Ire) (Dawn Approach {Ire}) in the Listed Ballylinch Stud 2000 Guineas Trial S. at Leopardstown Apr. 11 before reverting to six and finishing a close-up fourth in the G3 Lacken S. at Naas May 16.

Despite finishing well adrift of Dragon Symbol (GB) (Cable Bay {Ire}) and Campanelle (Ire) (Kodiac {GB}) at Royal Ascot, there was encouragement in the way Laws of Indices finished off there in testing ground that was hard work for all but especially the closers. This was a significant step forward on his recent efforts, but it was only the second time that forcing tactics were able to be employed on the bargain-basement €8,000 Goffs Autumn Yearling purchase who has had a tendency to get behind in his races and make his life harder than necessary. Perhaps it was the influence of one of France's genuine legends of the saddle, who was the latest to shine on the biggest stage in the year of the veteran jockey. Thunder Moon was bouncing back from two nondescript efforts at a mile and shaped as though this is a maximum trip, showing the same dramatic acceleration that he had at The Curragh last summer despite the preceding rain denting his chance.

Midtown, who was having his first start since winning Chantilly's Listed Prix Herod over this trip in November, was giving connections reason for optimism with his bold showing and Godolphin's Lisa-Jane Graffard commented, “It was a fantastic performance from Midtown and we are delighted with him. He is certainly entitled to come on for his first run in 235 days and we will see how he comes out of this before making any plans.”

Law of Indices is out of fast mare Sampers (Ire) (Exceed and Excel (Aus), a granddaughter of the G2 Prix de Malleret winner Privity (Private Account) who is a full-sister to the G1 Criterium de Saint-Cloud runner-up Zindari. from the family of the G1 Irish St Leger hero and sire Leading Counsel. This is also the family of Juddmonte's dual G3 John O'Gaunt S. winner and G1 July Cup runner-up Main Aim (GB) by Power's sire Oasis Dream (GB) and the triple group-winning Weightless (GB) (In the Wings {GB}). Sampers's yearling colt by Starspangledbanner (Aus) was a €80,000 purchase by Troy Steve Bloodstock at the Goffs November Foal Sale.