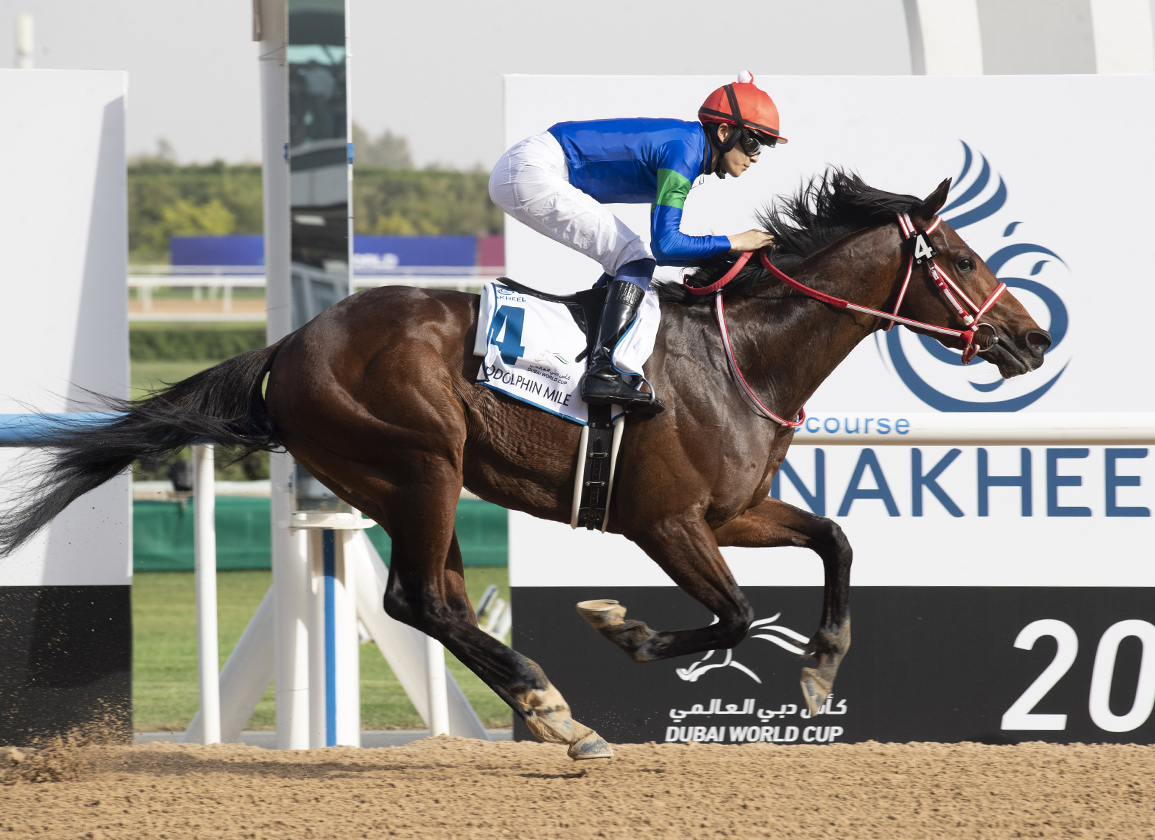 Japan's Bathrat Leon (Jpn) (Kizuna {Jpn}) led his foes on a merry dance in the $1-million G2 Godolphin Mile Sponsored by Nakheel, and gave his renowned trainer Yoshito Yahagi–yet another victory on the international stage at Meydan on Saturday. The second winner to fly the flag of the Land of the Rising Sun since Utopia (Jpn) (Forty Niner) in 2006, Bathrat Leon carries the colors of Hiroo Race Co. Ltd. Desert Wisdom (GB) (Dubawi {Ire}) tried to make a race of it in the stretch, but was never really getting to the winner, while the highly regarded Storm Damage (GB) (Night of Thunder {Ire}) applied some early pressure, but eventually faded to a distant third.

Not the quickest away but immediately sent up to contest the pace with Storm Damage, the bay established a half-length advantage while pressed by that foe. Travelling sweetly entering the bend, positions were largely unchanged, but Bankit (Central Banker) drew up to the outside of Storm Damage. Desert Wisdom was glued to the fence inside of that pair, but they all had Bathrat Leon to catch at the 600-metre mark.

Christophe Soumillon gave the Godolphin runner his cue, but Bathrat Leon had stolen a march on his rivals and opened up to lead by over a length with less than a quarter mile to go. Desert Wisdom came storming up the rail as Bankit faded, but the writing was on the wall. Storm Damage began to back up and Desert Wisdom ground his way into second, but he was running out of ground to reach the pacesetter. At the line, the Yahagi runner was 1 1/4 lengths ahead of Desert Wisdom, who had put 3 1/4 between himself and Storm Damage. It was four lengths back to Soliste Thunder (Jpn) (Toby's Corner) in fourth.

Winning jockey Ryusei Sakai said, “The plan was to go forward and just go quick. Everything worked out and the horse kept going. I think he preferred the dirt surface here more than in Japan. Mr. Yahagi is one of the best trainers in the world. It's a great result.”

Sakai, who has been riding for Yahagi in Japan for seven years, since he was an apprentice, added, “This was my dream and dreams come true. He [was expected] to run a good race in the last three days. His concentration is very good. I got the lead easily. He was travelling very well. I still wasn't very confident because you have American horses in behind who have speed and are very good.”

Yahagi has really showcased his talents as a trainer during the past five months or so, with wins in both the GI Breeders' Cup Distaff with Marche Lorraine (Jpn) (Orfevre {Jpn}) and the GI Breeders' Cup Filly & Mare Turf with Loves Only You (Jpn) (Deep Impact {Jpn}) in November. The latter also claimed the G1 Longines Hong Kong Cup in December, and Yahagi's runners' success continued on Saudi Cup day, Feb. 26. His Stay Foolish (Jpn) (Stay Gold) {Jpn}) captured the G3 Longines Red Sea Turf Cup, and would go on to land the G2 Dubai Gold Cup just one race after Bathrat Leon's win on Saturday.

Yahagi said, “He's a good strong front-runner and we know the bends well, so he got a good start and he pushed and he was able to keep it up to the line. We got our tactics right.”

Cristian Demuro, who rode Soliste Thunder, said, “Good run from a wide gate. The dirt here is different to that in Japan. Pretty happy with him.”

The last time Bathrat Leon visited the winner's circle was in the G2 New Zealand Trophy in April of 2021. Since that effort, he lost his way, failing to finish the G1 NKH Mile Cup that May, and then reeled off five straight off-the-board finishes. Thirteenth to Soliste Thunder over this distance in the G3 Tokyo Chunichi Sports Hai Musashino S. in November, he ran ninth on firm turf in the G3 Sports Nippon Sho Kyoto Kimpai at Chukyo on Jan. 5 when last seen.

One of 16 black-type winners and 10 at the group level for his sire Kizuna, Bathrat Leon joins G2 Prix Foy hero Deep Bond (Jpn) and last month's G3 1351 Turf Sprint heroine Songline (Jpn) as black-type winners outside of Japan for their young sire. Kizuna also has the G1 Queen Elizabeth II Cup victor Akai Ito (Jpn) as his first, and so far only, Group 1 winner.

The second foal, first runner and only winner for his unplaced dam, Bathrat Leon (Jpn) is followed by a juvenile filly named Letter My Heart (Jpn) (Daiwa Major {Jpn}). Bathrat Amal (Jpn), bred by Darley Japan, finished ninth in a brace of 10-furlong races at Windsor and Doncaster in 2014 for Godolphin and Charlie Appleby. Covered by the late Shamardal in 2015, that foal died, and she was then sold on for just 8,000gns at the 2016 Tattersalls July Sale carrying to Poet's Voice (GB). Bathrat Amal eventually made her way back to the land of her birth, and her latest offspring is a colt by Duramente (Jpn) foaled this year.