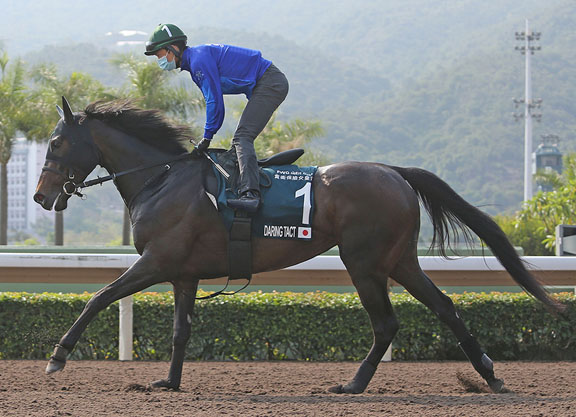 Japanese-based gallopers have left their mark on FWD Champions Day at Hong Kong's Sha Tin Racecourse, and as many as five raiders from the nearby island nation will attempt to continue that trend this weekend in front of as many as 6,000 racegoers as COVID restrictions ease in the region.

The day's richest event at HK$25 million is the G1 FWD QE II Cup (2000mT), in which Japan owns four of the seven entries with a cloud hanging over the participation of 2019 G1 Longines Hong Kong Vase hero Glory Vase (Jpn) (Deep Impact {Jpn}). Reigning Filly Triple Crown winner and champion 3-year-old filly Daring Tact (Jpn) (Epiphaneia {Jpn}) looms the one to beat, even as she suffered a shock defeat as the $1.40 (2-5) favourite in the G2 Kinko Sho in her lone outing this season Mar. 14. Her stiffest challenge could come from Loves Only You (Jpn) (Deep Impact {Jpn}), like Daring Tact winner of the G1 Yushun Himba (Japanese Oaks) at home and exiting a tough third to Mishriff (Ire) (Make Believe {GB}) in the G1 Dubai Sheema Classic (2410mT) at Meydan Mar. 27. Kiseki (Jpn) (Rulership {Jpn}), whose sire took out this event in 2012, won the 2017 G1 Kikuka Sho (3000mT) and could be a pace factor, while Exultant (Ire) (Teofilo {Ire}) defends his title as one of three Hong Kong entries. Japanese runners have won the QE II five times since 2002 and twice in its last four runnings.

Danon Smash (Jpn) (Lord Kanaloa {Jpn}), who won the G1 Longines Hong Kong Sprint at longshot odds before adding last month's G1 Takamatsunomiya Kinen (1200mT), is clearly the one to beat from gate five in the G1 Chairman's Sprint Prize, a race won just once by a foreign entry (Chautauqua {Aus}, 2016). It can be said that trainer Takayuki Yasuda, who also conditioned Danon Smash's two-time Hong Kong Sprint-winning sire, holds the 6-year-old in fairly high regard.

“Last December I honestly thought Danon Smash was not equal to the level of Lord Kanaloa at that stage, but after winning that race, he improved a lot,” Yasuda said. “I think Danon Smash has reached the same point as Lord Kanaloa now.”

With top sprinter Hot King Prawn (Aus) (Denman {Aus}) on the shelf, the locals have a chance to sort themselves out in the pecking order. Wellington (Aus) (All Too Hard {Aus}) had won six of eight, but was no better than fifth to 178-1 Amazing Star (NZ) (Darci Brahma {NZ}) in the G2 Sprint Cup Apr. 5. Stronger (Aus) (Not A Single Doubt {Aus}) has just a single win in Class 2 to his credit this season, but was runner-up to Sky Field (Aus) (Deep Field {Aus}) in a Class 1 at Happy Valley two back and missed by a short-head in the Sprint Cup last time.

Golden Sixty (Aus) (Medaglia d'Oro) will be a long odds-on selection in the G1 FWD Champions Mile, a victory in which would take his current winning streak to 14. Only five others are signed on, including last year's winner Southern Legend (Aus) (Not A Single Doubt {Aus}), but Golden Sixty is likely to stay out of trouble and his late turn of foot should get the job done.

“I'm happy. I just had an easy gallop over six furlongs on him this morning and everything is good,” his regular rider Vincent Ho said. “There are no any concerns over him in any way. He feels very good.”

The last-start winner of the G1 Citi Hong Kong Gold Cup over 10 furlongs, Golden Sixty was for a time under consideration for the QE II, but lands in his sweet spot for this.