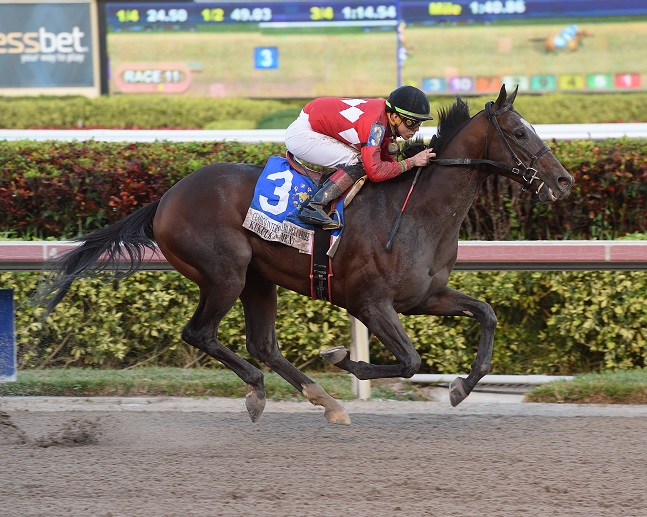 After a recruiting trip to Japan, the Stronach Group's President Mike Rogers has secured a commitment from the connections of Aerolithe (Jpn) (Kurofune) for the GI Pegasus World Cup Turf Invitational to be run Jan. 26 at Gulfstream Park. The race is worth $7 million.

In addition, Rogers reports that the connections of Mexican star Kukulkan (Mex) (Point Determined) are considering a start in the $9-million GI Pegasus World Cup and that the Coolmore team has indicated that it will start GI Breeders' Cup Turf runner-up Magical (Ire) (Galileo {Ire}) in the Pegasus Turf race.

Aerolithe will be five when the Pegasus card is conducted. She is 4 for 13 in her career with three stakes wins, including the G1 NHK Mile Cup. Rogers said that the ownership group, Sunday Racing Co., Ltd., has agreed to come, but there still may be a hitch

Nippon Cargo Airlines had been the primary carrier in Japan when it comes to transporting horses. Earlier this year, the airline was grounded after the Japanese government found errors in its maintenance records, which has made shipping horses in and out of Japan very difficult. Rogers said he is trying to find alternative means of shipping the horse from Tokyo to the U.S. He has been in contact with both Korean Airlines and Tex Sutton Equine Transport and is cautiously optimistic transportation can be worked out.

Rogers said he was also scouting for Japanese dirt horses for the Pegasus World Cup, but the horses on the list that were considering the race all ran poorly in the G1 Champions Cup on the dirt and their connections decided to pass. Nonetheless, Rogers saw getting even one Japanese horse as a major coup for the Pegasus races.

“It's very exciting,” he said. “We really want to position ourselves to be an international race, so having a horse from Japan is a step in that direction.”

A Japanese presence could also greatly help grow the handle. Rogers said it was unlikely the 2019 Pegasus Turf would be simulcast in Japan. That country limits the amount of foreign races its bettors can wager on to 20, and there are several restrictions. However, if the Japanese continue to participate in the Pegasus events that could open the doors to players in that country being able to bet on Gulfstream's two rich races. The first ever race simulcast into Japan was the 2016 G1 Prix de l'Arc de Triomphe and the Japanese bet about $35 million on the race.

Kukulkan is a sensation in Mexico, where he was undefeated in 13 starts and won the Mexican Triple Crown. He shipped to Gulfstream to compete in last Saturday's $300,000 Carribean Classic S. and demolished his opponents, winning by 10 1/4 lengths.

“Kukulkan's owner is considering running, as well,” Rogers said. “We are really excited about that. The horse is undefeated and you have to give him a lot of credit for that. Yes, he probably hasn't run against this kind of competition yet, but the owner seems like a real sportsman and he's taking it under serious consideration. For us, to have a Triple Crown winner from Mexico positions us even more so to be an international event.”

Considering that Kukulkan got a 71 Beyer Speed Figure in The Carribean Classic, he will likely have a hard time competing against the caliber of horses lining up for the Pegasus World Cup.

Rogers reported earlier that Coolmore, which has been a big supporter of the Pegasus program from the start, has made a commitment to run in both races. Rogers said he has been told the stable will likely ship Magical to run in the $7-million turf race. She's coming off a stellar performance in the Breeders' Cup Turf where she finished second behind Enable (GB) (Nathaniel {Ire}), losing by just three-quarters of a length. She would likely be heavily favored in the Pegasus Turf.

Getting other European horses to come over is still a work in progress, and January is not a good time to have a race when looking to attract European flat horses. The top quality horses from overseas are primarily put away for the winter until the flat season starts up in the spring.

“Maybe it's out fault because we were late in announcing this race, but we've been told by the Europeans if they had a little more time they could have prepared to run in the race,” Rogers said. “We're committed to this turf race. I think you'll see more Europeans put it on their calendar in the future.”

At $7 million, the Pegasus Turf has a bigger purse than any single race in Europe.