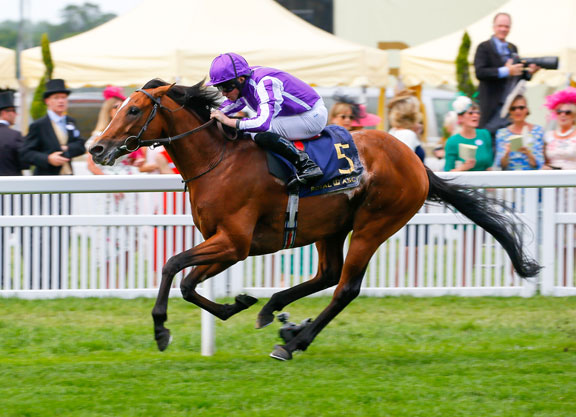 ParisLongchamp plays its part in the Bastille Day celebrations on Sunday, when the G1 Juddmonte Grand Prix de Paris is the focus. Generally the preserve of Andre Fabre, it looks likely to go west this year with Aidan O'Brien saddling the impressive G2 King Edward VII S. winner Japan (GB) (Galileo {Ire}). Third in the G1 Epsom Derby on June 1, last year's G2 Beresford S. scorer went through that June 21 Royal Ascot contest with a casual air to suggest he could take high rank among the stable's Arc candidates. This is the ideal testing ground for the October showpiece and the Ballydoyle handler said, “Japan is good and everything seems fine since Ascot. He had a little bit of a setback in the spring and that is why he just barely made the run at York. We had to wait and see how he was after York and that is why we felt he was just about ready to run in the Derby. He ran a very nice race there.”

Fabre, who has won this in its various guises a record 13 times, looks to pose the biggest threat to Ballydoyle with a trio headed by Godolphin's Roman Candle (GB) (Le Havre {Ire}). Upped to a trip that is certain to suit, the May 1 G2 Prix Greffulhe scorer caught the eye when a troubled fifth in the G1 Prix du Jockey Club over 10 1/2 furlongs at Chantilly on June 2. “Roman Candle ran a very encouraging race in the Prix du Jockey Club, which Andre Fabre hopes has set him up nicely for this contest,” Godolphin's Lisa-Jane Graffard said. “We would be delighted if he were to finish in the first three.”

Only 12th in the Chantilly Classic and disappointing, the stable's Slalom (Fr) (Intello {Ger}) has to bounce back to the form of his Apr. 14 G3 Prix Noailles success here while Fabre also saddles one for the sponsors in the Maisons-Laffitte conditions winner In Favour (GB) (Frankel {GB}).

Elsewhere on the card, last year's G1 Prix du Cadran hero Call the Wind (GB) (Frankel {GB}) takes on the G1 Prix Royal-Oak winner Holdthasigreen (Fr) (Hold That Tiger) and Marmelo (GB) (Duke of Marmalade {Ire}) in the G2 Prix Maurice de Nieuil, with the latter bidding for back-to-back renewals. Charlie Appleby runs two in the Listed Prix Roland de Chambure, with James Doyle opting for the June 22 Newmarket novice scorer Saqqara King (American Pharoah). “We were pleased with Saqqara King's win at Newmarket and he has definitely come forward for the run,” he said. “His work has been pleasing and looks like stepping up in trip in time will suit him. I feel he has got a nice progressive profile.”