Jackie's Warrior, Former King of the Hill, Looks to Reclaim His Perch 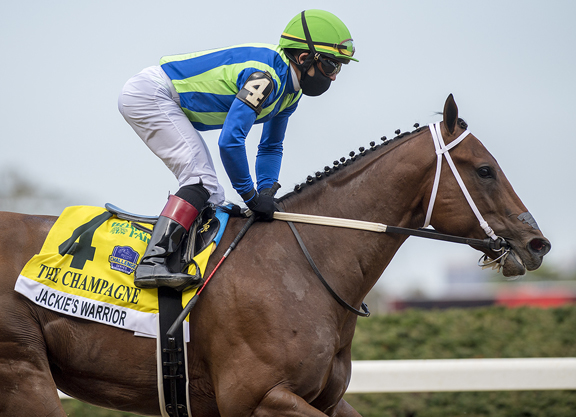 In the world's current state of affairs, a lot can change in a few months' time. Racing is no different. One only has to go back to November to remember when Kirk and Judy Robison's Jackie's Warrior (Maclean's Music) was the undisputed leader of his age group. But an odds-on loss on the sport's biggest stage took the bloom off of his rose for some, and these days, despite being a multiple Grade I winner, one could argue he is a forgotten colt as the GI Kentucky Derby trail kicks into high gear.

But opportunity knocks this Saturday, in the twice-delayed GIII Southwest S. at Oaklawn, where the brilliant $95,000 Keeneland September grad will make his 3-year-old debut and get his long-awaited rematch with the rival who snatched away his Eclipse statuette with a conquest of the GI Breeders' Cup Juvenile, Essential Quality (Tapit).

“Steve [Asmussen]'s extremely happy with the horse, I personally love the draw, number four in a seven-horse field and you get the favorite down on the rail, so I think we're good to go,” Robison said Wednesday of the Southwest, which was originally supposed to run Feb. 15 but got pushed back two times due to inclement weather in Hot Springs. “Steve never considered another race. From 6-8 weeks ago, he was always on track for this race and I think when they announced Essential Quality was probably going there too, it scared a few people off, but that's where we wanted to go from day one. No excuses.”

After dominating a trio of historic 2-year-old stakes last summer and fall–the GII Saratoga Special S., GI Runhappy Hopeful S. and GI Champagne S.–Jackie's Warrior was regarded highly enough to be hammered down to 9-10 favoritism in the Juvenile, one of the shortest prices of the entire Breeders' Cup weekend. But the speedball was caught too close to a scorching pace of :22.58 and :45.31, and just faded late after making the lead in mid-stretch under Joel Rosario, ending up fourth, beaten 3 3/4 lengths by tripped-out closer Essential Quality.

The nature of that first defeat raised doubts about Jackie's Warrior's ability to see out two-turn races, considering his running style and sprint-leaning pedigree.

“I think there's always been some question about whether he could get a mile and a sixteenth against top-flight horses,” Robison said. “He was not able to do it that day, but I'm very confident he can get it done Saturday. It's a different circumstance, smaller field, and I think Rosario and Steve probably learned a lot from what happened in the Juvenile, so let's see what happens.”

As for potentially trying to throttle the horse's speed down to increase his staying chances, Robison said, “He really is freaky fast, and I remember Steve telling me a long time ago about horses, 'Never take away what they do well.' So if you have a horse who outbreaks the field, don't take that advantage away from the horse, let him go on. He's just a natural speed horse and I think that's what his style will be. The question is going to always be, how far can he take that kind of speed? We'll find out.”

And, if Jackie's Warrior doesn't continue on the Derby trail after Saturday, that will be just fine with Robison, a veteran of the game who deeply appreciates the prestige of big races beyond the Run for the Roses.

“If he turns into a multiple Grade I winner around one turn, that's not the end of the world,” he said with a laugh. “I don't get up in the morning dreaming about a Derby horse. People at cocktail parties only want to hear about the Derby, but most of us in the industry know with these Grade I sprints and one-turn mile races, how important they are. I'm not going to presume what Steve's going to do after this race, but having said that, I think he'll run extremely well.”