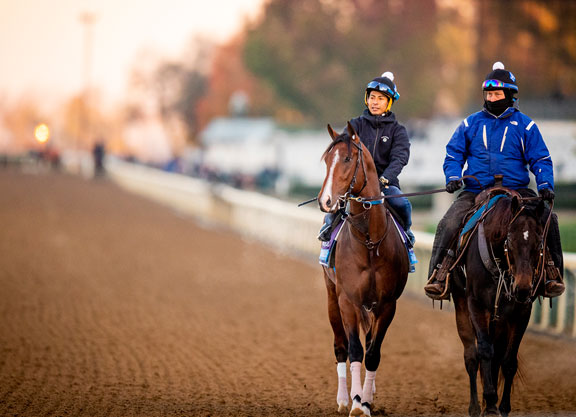 J. Kirk and Judy Robison's Jackie's Warrior (Maclean's Music) returns to one turn for the first time since winning the GI Champagne S. last October as the likely favorite in Saturday's GII Pat Day Mile beneath the Twin Spires.

A $95,000 Keeneland September purchase, Jackie's Warrior is perfect in four starts up to a mile, having stamped himself as the leader of his generation with powerful front-running victories in the GII Saratoga Special S. and GI Hopeful S. ahead of a 5 1/2-length tally in the Champagne that made him the one to beat in the GI Breeders' Cup Juvenile. In close attendance to a very demanding pace on Breeders' Cup Friday, the scopey bay colt poked a head in front between calls in the final stages, but weakened last to finish fourth, beaten just over three lengths behind champion Essential Quality (Tapit), in an effort better than it looks on paper. Connections understandably gave him one more chance to board the Triple Crown train in the GIII Southwest S. over a sloppy Oaklawn strip Feb. 27, but he tired after getting things very much his own way up front and checked in a distant eighth.

Dream Shake (Twirling Candy) caused a bit of a dust-up in his career debut, winning by 4 3/4 lengths at 20-1 and earning a 96 Beyer Speed Figure in a 'Rising Star'-worthy performance. Third to fellow 'Rising Star' Life Is Good (Into Mischief) in the GII San Felipe S. and to Derby second choice Rock Your World (Candy Ride {Arg}) in the GI Santa Anita Derby, he, too, can benefit from this cutback in distance.

This race has been known to toss up the occasional long-priced winner and Sittin On Go (Brody's Cause) could be a live outsider. A debut graduate sprinting at Ellis Park last August, he defeated Derby entrants Midnight Bourbon (Tiznow) and Super Stock (Dialed In) to upset the GIII Iroquois S. over course and distance on the Derby undercard last September. Beaten nearly 50 lengths combined in his last three tries around two turns, the chestnut will try to make a run from out of it in a race that appears to be loaded with speed.