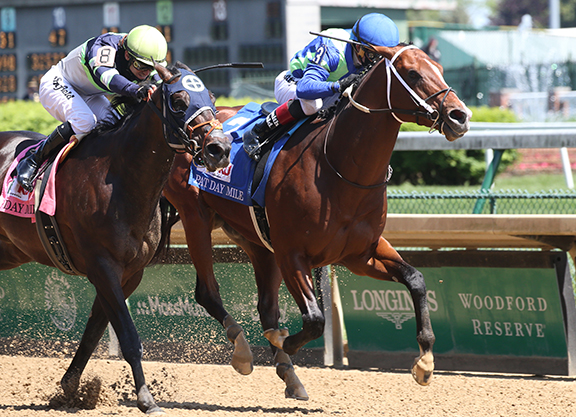 Jackie's Warrior showed his appreciation for the cutback to one-turn with a gutsy score in the Pat Day Mile Saturday beneath the Twin Spires. Breaking sharply, the favorite took up his preferred position at the head of affairs, zipping through an opening quarter in :21.75 with a trio of rivals hot on his heels. Traveling comfortably as he registered a :43.68 half-mile, the chestnut turned for home in front out in the three path. Confronted by 'TDN Rising Star' Dream Shake in the lane, Jackie's Warrior refused to be denied and kept on finding to fend off that foe and return to the winner's circle. It was 4 1/2 lengths back to Whiskey Double in third.

“I'm proud of who Jackie's Warrior is, under these circumstances, only validates of the beliefs we had in him,” said winning conditioner Steve Asmussen. “It's quite obvious that he's a special horse and there are plenty of opportunities for him out there that will serve his assets best.”

“I was pretty confident that he was going to hang in down the stretch,” said Joel Rosario, who was also in the irons for the colt's three prior graded scores in New York. “He likes when a horse comes up to him and he really digs in. I was not worried about the fast early pace because he fights very hard down the stretch.”

A debut winner going five furlongs over this strip last June, Jackie's Warrior wired the GII Saratoga Special S. next out in August and repeated in that venue's GI Runhappy Hopeful S. a month later. Dominating the GI Champagne S. going a one-turn mile at Belmont Oct. 10, he could only manage fourth as the favorite when trying two turns for the first time in the GI Breeders' Cup Juvenile S. at Keeneland Nov. 6 and was third when given another try routing in Oaklawn's GIII Southwest S. Feb. 27, both of which were won by champion Essential Quality (Tapit).

Jackie's Warrior is one of three Grade I victors, five graded winners and 21 black-type scorers by Maclean's Music. His dam Unicorn Girl RNA'd for $110,000 at the 2018 Keeneland November Sale and came back to sell to Arthur Hoyeau for $850,000 at the 2020 renewal of that auction thanks to her son's accomplishments and the Into Mischief in her belly. She had a Candy Ride (Arg) filly in 2019 and an American Pharoah colt in 2020, who brought $600,000 from Coolmore's M. V. Magnier at KEENOV. Unicorn Girl has yet to produce that Into Mischief foal.