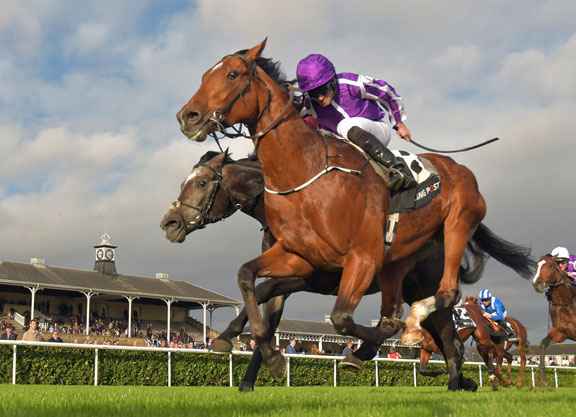 There was a feeling of destiny at Doncaster on Saturday and TDN Rising Star Saxon Warrior (Jpn) (Deep Impact {Jpn}) duly delivered the world-record-setting 26th group 1 success for Aidan O'Brien's Ballydoyle stable in 2017 in the feature G1 Racing Post Trophy. Sent off the 13-8 favourite coming off a win in the G2 Beresford S. over this mile trip at Naas Sept. 24, the bay was left exposed in the strong wind heading the main pack as the Ballydoyle and Bolger pacemakers set off in isolation. In front before the quarter pole, he was headed soon after by Roaring Lion (Kitten's Joy) and looked temporarily beaten, but Ryan Moore was in no mood to be denied and Saxon Warrior found something more in the final 100 yards to carve out a neck success from that rival and provide the stable with an eighth renewal, with Ballydoyle's fellow TDN Rising Star The Pentagon (Ire) (Galileo {Ire}) 2 1/2 lengths back in third. “He travelled very strong throughout the race and Ryan gave him a brilliant ride,” his trainer said. “I thought he was beaten, but he found plenty and I'm just delighted for everybody as there has been a lot of hard work from everybody to achieve this.”

Saxon Warrior's debut performance when taking a Curragh maiden over this trip stamped him as a colt out of the top drawer Aug. 27 and he had to plough through testing conditions which would have played against him when collecting in the Beresford. Again facing ground softer than ideal, he was the victim of his own brilliance here with his natural ability taking him to the fore of the group containing the main contenders as his stable pacemaker Coat of Arms (Ire) (Galileo {Ire}) and Jim Bolger's Theobald (Ire) (Teofilo {Ire}) set off far too strong up ahead. The latter's stablemate, the G1 Goffs Vincent O'Brien National S. hero and strongly-supported TDN Rising Star Verbal Dexterity (Ire) (Vocalised), was laboured from the outset with Kevin Manning having to urge him into the race which contrasted with Saxon Warrior's smooth-motoring progress through the early stages. When the tempo-setters began to backpedal, it was left to the two market protagonists to take control of the race and O'Brien's record attempt looked briefly a formality until Qatar Racing's previously unbeaten G2 Royal Lodge S. winner Roaring Lion loomed on the outer. Sweeping past Saxon Warrior and bumping that rival as both colts lugged left with a furlong remaining, Roaring Lion appeared to have the race in safe keeping but Moore energised the favourite to re-assert as they pulled away from some class acts in behind.

It could be that Saxon Warrior was an apt horse to break the record with, as he looks capable of anything at this stage. He has the pace to play a part in a 2000 Guineas that looks wide-open at this stage with no obvious champion among the speedier colts, while he now occupies short-priced favouritism for the Derby which this race often points to. This was as strong a renewal of the Racing Post Trophy as has been witnessed in years and the winner could easily belong in the same category of the leading recent winners High Chaparral (Ire), Motivator (GB), St Nicholas Abbey (Ire) (Montjeu {Ire}) and Camelot (GB). Aidan O'Brien clearly thinks that Saxon Warrior could follow suit in providing more Classic glory to the yard in 2018. “Ryan said he surprised him how quickly he jumped into it,” he commented. “He was very impressed with him and he's a horse to really look forward to. He's a very special horse, we think. He's done everything we've asked of him and he's only been a baby. Originally we thought we'd get one run into him. He had that run and then we said we might chance another and then he won in Naas. He came out of Naas so well we said we'd come here. It's incredible really. I'd say there's no doubt he'll be better on better ground.”

Reflecting on the magical 26th top-level success, he said, “You're always afraid when you want something to happen, it doesn't happen. I couldn't believe it when this horse came back. When John's horse came by him I said 'that's it, he'll be second', but Ryan really conjured a new run out of him. It's been a funny year really. A lot of horses have progressed and progressed. There were so many horses like that, it was unusual. A lot of very well-bred horses just got better and better. The lads have an unbelievable band of mares and stallions and there are a lot of horses with blue-chip pedigrees. The genes are obviously there if you can get them to fire up.” Roaring Lion's trainer John Gosden said of Ballydoyle's unprecedented tally, “It's a fabulous achievement. He's a great man to compete against and to get 26 in one year is incredible.”

Saxon Warrior is the second foal out of the stable's European champion juvenile filly Maybe (Ire) (Galileo {Ire}) after his Listed Platinum S.-placed full-sister Pavlenko (Jpn). Maybe went through her juvenile campaign similarly unbeaten after going to Royal Ascot for the Listed Chesham S. and following that outing took in the G3 Silver Flash S., G2 Debutante S. and G1 Moyglare Stud S. Her first defeat came in the G1 1000 Guineas when she was upset by stablemate Homecoming Queen (Ire) (Holy Roman Emperor {Ire}) and was only third as the 13-8 favourite, while she was fifth in the Oaks before her form tailed off. She is a full-sister to last year's G3 Silver Flash S. winner and G1 Prix Marcel Boussac and G1 Criterium International-placed Promise To Be True (Ire) and their dam is the Listed St Hugh's S. scorer Sumora (Ire) (Danehill). She in turn is a half to the G1 Epsom Oaks, G1 Preis der Diana and G2 Qipco British Champions Fillies' and Mares' S. heroine Dancing Rain (Ire) (Danehill Dancer {Ire}), whose daughter Magic Lily (GB) (New Approach {Ire}) earned TDN Rising Star status with a wide-margin win on debut at Newmarket last month and was a close-up third in the G1 Fillies' Mile. The third dam Rain Flower (Ire) (Indian Ridge {Ire}) is a half-sister to the G1 Epsom Derby, G1 Irish Champion S. and G1 Dewhurst S.-winning sire Dr Devious (Ire), the Irish champion sprinter Archway (Ire) and fellow sires Shinko King (Ire) and Royal Court (Ire), while her unraced half-sibling Rose of Suzuka (Ire) (Fairy King) produced the G1 Takamatsunomiya Kinen-winning sire Suzuka Phoenix (Jpn). Maybe also has a colt foal by American Pharoah and was bred to War Front this year.