It's 'Oath' and Coach in the Oaks 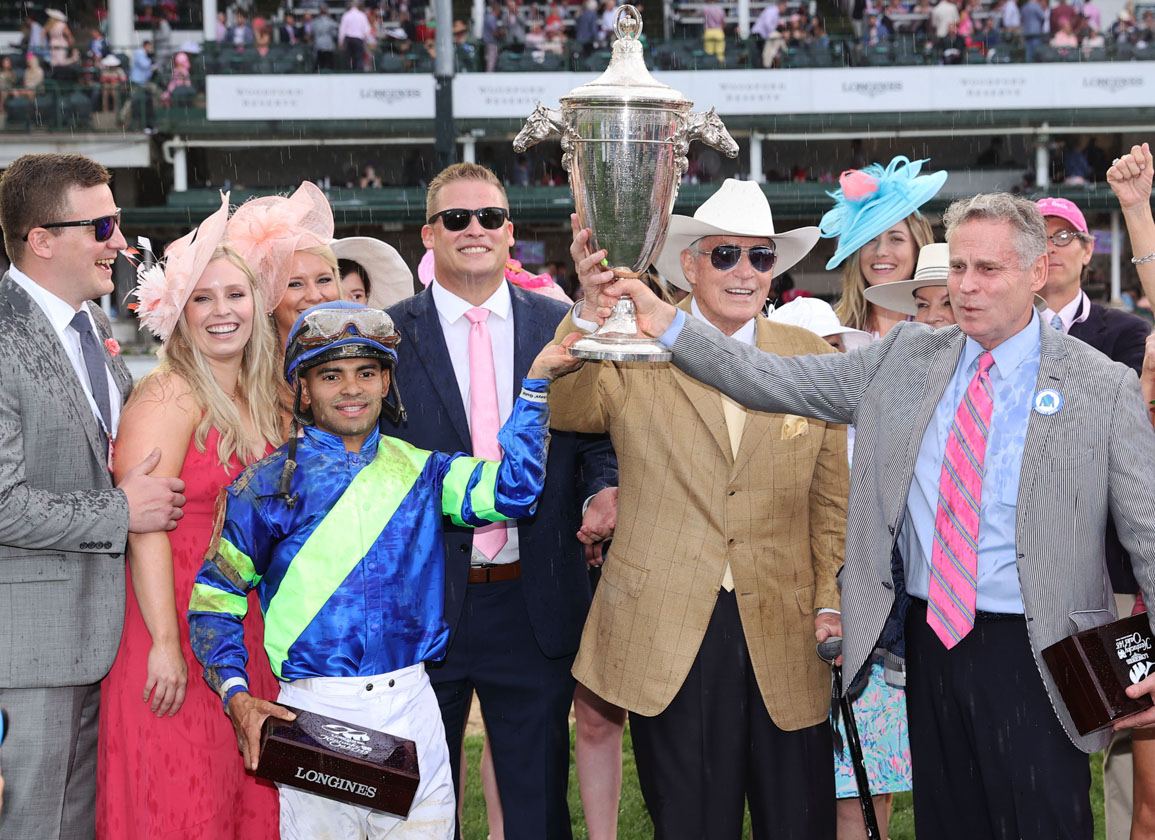 Fully four decades after Stonereath Farms' Blush With Pride (Blushing Groom {Fr}) gave the Hall of Famer a maiden victory in the GI Kentucky Oaks–now sponsored by Longines–and 32 years after Seaside Attraction (Seattle Slew) provided William T. Young's Overbrook Farm with their lone success in the fillies' feature for Lukas's fourth and most recent winner, Briland Farm homebred Secret Oath (Arrogate) was back to her brilliant best beneath the Twin Spires, as she capitalized on a frenetic pace and outfinished GI Central Bank Ashland S. heroine Nest (Curlin) for a decisive tally. Arizona-bred longshot Desert Dawn (Cupid) was up for third over pace-pressing champion and 'TDN Rising Star' Echo Zulu (Gun Runner).

“It feels great,” said Lukas, impeccably clad as is his big-race custom. “I've said all week, as trainers we think it's us. After you win one, the real satisfaction is for the [owners] who raised her and let them have the opportunity to enjoy this and get the thrill.”

Secret Oath outran odds of 31-1 to be third on her one-mile debut over a rain-affected Churchill strip Oct. 3 and ghosted her rivals by 5 1/4 lengths when tried around two turns on Halloween before finishing a well-beaten fifth in the local GII Golden Rod S. Nov. 27.

Relocated to Oakawn Park for the winter, the track at which her dam Absinthe Minded (Quiet American) did the majority of her best work, the chestnut took things to a new level in a one-mile allowance on New Year's Eve, whooshing home and leaving Friday's GII Eight Belles S. victress Matareya (Pioneerof the Nile) 8 1/4 lengths in her wake. The 7 1/4-length winner of the Jan. 29 Martha Washington S., Secret Oath followed up by a similar margin in the GIII Honeybee S., sewing up a spot in this event in the process. But instead of taking the path of least resistance against her peers in the GIII Fantasy S., connections rolled the dice against the boys in the GI Arkansas Derby, a race whose $1.25-million purse was better than double that of the Fantasy. But little went right, as she was bothered at the start, was consigned to a six-wide run around the turn and peaked on her run about a sixteenth from home to finish third behind Cyberknife (Gun Runner). Lukas vowed that, win or lose, it was onto the Oaks and Secret Oath took care of the rest on an intermittently rainy Friday afternoon.

A Superlative Steer from Saez…

Luis Contreras was Secret Oath's partner for her four-race campaign in Hot Springs, but he came under some fire for his Arkansas Derby ride and was ultimately replaced by Luis Saez, whose agent Kiaran McLaughlin served as an assistant to Lukas before going on to a successful training career of his own. The Panamanian, who celebrates his 30th birthday May 19, had a previous relationship with Lukas, having won the 2013 GI Travers S. and GI Clark H. with champion Will Take Charge (Unbridled's Song).

The joint-third choice for the Oaks with the previously undefeated Kathleen O. (Upstart), Secret Oath was away without incident from stall one, but drifted back to midfield as a hot pace developed, as was widely expected. Echo Zulu was first to break the line, but she was soon supplanted on top by Fantasy heroine Yuugiri (Shackleford) who led the way through an opening quarter-mile in a demanding :22.45.

Eighth and ground saving as the Oaks field rounded the clubhouse turn, Saez pulled Secret Oath away from the inside and improved three wide and in the clear down the backstretch, now racing just in advance of Nest at the rail, with GII Rachel Alexandra S. upsetter Turnerloose (Nyquist) between those two.

Out of harm's way as they entered the turn, Secret Oath commenced an eye-catching move around Desert Dawn and Venti Valentine (Firing Line), catapulting herself from eighth to third in the space of a sixteenth of a mile, and was poised to strike outside of Echo Zulu nearing the stretch.

Saez cut the ribbons once heads were turned for home and Secret Oath drove past Echo Zulu entering the final furlong and a half. Nest, full of run but with nowhere to go on the swing into the stretch, was produced wide leaving the quarter pole, but Secret Oath had gotten the jump by then and was home for a comfortable victory. Desert Dawn kept on for third ahead of Echo Zulu, who was the only one of those involved in the pace to be anywhere close at the finish.

“I rode a lot of good fillies, but this one is pretty special,” Saez said. “It's an honor to be a part of Mr. Wayne [Lukas] because he's a legend. And we win a lot of big races for him, the Travers. And win the Oaks for him, it was like everything for us. So pretty grateful to be a part.

He continued, “She did it pretty easy. I remember at half a mile, I saw everybody in the lead pretty far. And [in] two jumps I was right there. She did it so easy.”

Lukas said all options are on the table for Secret Oath, including the GI Preakness S. in 15 days' time, or the sex-restricted GII Black-Eyed Susan S.

Robert Mitchell and his wife Stacy purchased Secret Oath's then 10-year-old second dam Rockford Peach for $36,000 in foal to Running Stag at the Adena Springs sale at Fasig-Tipton in 2001, and clearly the best of the 11 foals she produced for Briland Farm was her fourth to hit the ground, Absinthe Minded.

Also trained by Lukas, the daughter of the good filly sire Quiet American won two renewals of the Bayakoa S. and the Pippin S. at Oaklawn and was placed twice in the GI Apple Blossom H. Outside of Arkansas, Absinthe Minded was narrowly runner-up in the 2011 GII Shuvee H. and third in that year's GII Molly Pitcher S. All totaled, the mare won six times from 35 starts and bankrolled over $607,000.

The fourth foal for her dam, Secret Oath was cataloged through Bluewater Sales as hip 1242 to the 2020 Keeneland September Sale, but a bit of fate intervened and she was withdrawn.

“She looks like her mother and her sister. She just kind of had that tall, thin, arrogant like,” Robert Mitchell said. “Tall, thin, narrow,” added Stacy.

Robert picked up from there: “That's not the classic commercial horse. And I thought, 'Well, if she looks like her mother, her mother placed in five graded stakes and won a number of graded stakes. Why don't we just pull her out and keep her?'”

Absinthe Minded is the dam of a 2-year-old filly by Medaglia d'Oro and missed when bred back to Arrogate for 2021. She was most recently covered by Unbridled's Song's Lane's End-based son Liam's Map.

Absinthe Minded said to #SecretOath
“Let me tell you about the first friday in May,,,,,,”
🌸🌸🌸🌸🌸🌸🌸 pic.twitter.com/ZMZkfNjUjR

Lukas Loving Every Minute of It…

“I thought he was a little bit flat,” he explained. “I didn't think that he was moving as well. And I knew that if I ran him in the Derby that I would eliminate the [GI] Preakness [S.] in all consideration. It would just be too many all right in a row.

“So I talked to the owner (Julie Gilbert/Aaron Sones). He was in Hawaii, couldn't be here anyhow. So he said do what you want to do, treat him like you own him. So we took him out. And we'll look at the Preakness in two weeks.”

The reverence and esteem in which Lukas–who still rides out in the mornings–is held was on clear display in the immediate aftermath of Friday's race. Lukas watched the race alongside his former assistant and fellow Oaks-winning trainer Dallas Stewart and 'the Coach' accepted congratulations from and exchanged hugs with former assistant Todd Pletcher in the tunnel.

“Those guys that were so influential in my career and carried me to where we are today, they put me on their shoulders and carried me,” Lukas reflected. “And I know it. I couldn't do it alone. I never could with all the horses we were training. So we're still very tight. It's a close-knit family.”