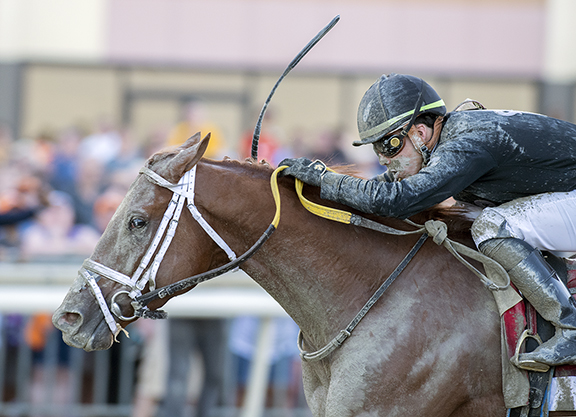 While would-be favorite Maximum Security (New Year’s Day) was ruled out of Saturday’s GI Pennsylvania Derby earlier this week, another runner from the same Gulfstream $16,000 maiden claimer that that MGISW graduated in, Math Wizard (Algorithms), pulled off a 31-1 shocker in Parx’s signature event.

Claimed by his current connections for $25,000 out of an 18 1/2-length romp in Hallandale in January, the chestnut hadn’t won since then, but had racked up plenty of money. He was fourth in both the Apr. 6 GII Wood Memorial S. and May 4 Oaklawn Park Invitational, and was a close second in the June 22 GIII Ohio Derby, all at this trip. He was third behind Mr. Money (Goldencents) in the GIII Indiana Derby July 13, but failed to fire when sixth behind that same re-opposing foe in the GIII West Virginia Derby Aug. 3.

Ignored in the wagering while breaking from the rail, Math Wizard was away alertly. The same could not be said for race favorite Improbable (City Zip), who threw his head about right at the start and was off last. Math Wizard saved all the ground towards the back of the pack as a hard-held Mr. Money showed the way with GI Preakness S. hero War of Will (War Front) applying token pressure through splits of :24 2/5 and :49 3/5. Math Wizard was called on to quicken behind six panels in 1:13 2/5, and swung very wide into the lane as Mr. Money fended off Improbable up the fence and War of Will to his outside. Math Wizard had all the momentum down the center of the track, however, and the frontrunner had no response for him late.

“It was great; I got a perfect trip,” said winning rider Irad Ortiz, Jr., who was a late replacement for Edgard Zayas. “He broke, put me in a good position. I saw the favorite didn’t break and I didn’t panic. I just said, ‘he’s going to come from somewhere. He’s just not forwardly placed in front of me.’ He got through inside of me and from there I just tried to follow him. Then on the backside my horse jumped on the bridle. When I put my hands down he jumped on the bridle and I said, ‘whoa, wait a little longer.’ I wanted to wait a little longer and not get inside of Improbable, so I just wait, wait, wait and at the half mile I made my way outside of him. He was coming little by little, but when he turned for home and he switched leads then he took off. He ran hard. When I turned for home and I opened the reins and he started taking off I said, ‘I’m going to get there.'”

Winning co-owner John Fanelli said, “This is my home track. They asked us [to run], but we wanted to. The reason we didn’t know was he was laying down in his stall and he wasn’t feeling himself and we were going to push him, but we said, ‘the worst case scenario would be we don’t come and it cost us a couple thousand dollars.’ And, if he feels good in the next couple of days, we will bring him up, and that is exactly what happened. He just got better and better.”

Saturday’s victory was the first graded win of any kind for 32-year-old Barbados native Saffie Joseph, Jr., who has emerged as one of the leading trainers based in South Florida year round.