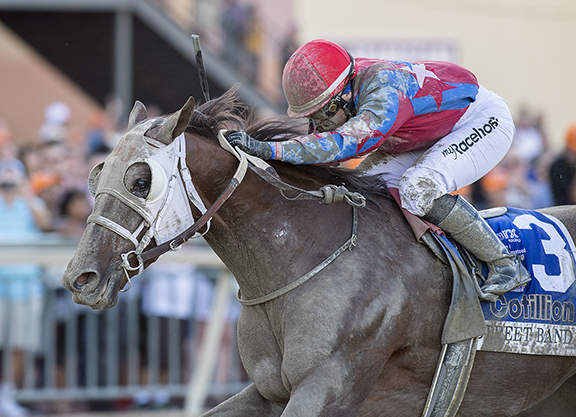 Street Band (Istan) rallied past four Grade I winners Saturday to reach the highest level herself in Parx’s GI Cotillion S. while earning an automatic spot in the starting gate for the GI Breeders’ Cup Distaff in the process. Dismissed at 7-1 off a third-place run in the GI Alabama S. Aug. 17, the chestnut dropped back to last early but got her set-up as last year’s champion juvenile filly Jaywalk (Cross Traffic) and MGISW Bellafina (Quality Road) knocked heads through splits of :22 3/5 and :46 1/5. Street Band tugged her way up quickly and willingly to reach contention heading for home, and she was moving into third while very wide as previously unbeaten ‘TDN Rising Star’ Guarana (Ghostzapper) struck the front at the quarter pole. Street Band always looked to have that even-money favorite’s measure, and she pulled away from her at will to run up the score to 2 1/4 lengths. Horologist (Gemologist) spiced up the trifecta at 21-1.

“Honestly my trip, I had to go to Plan B and C,” said winning rider Sophie Doyle, who was celebrating her first Grade I victory. “She was a little worked up in the post parade, I think you also saw that in the paddock. When she broke away from the gate I said, ‘you know what, there’s so much speed in here, I’m not going to rush her off her feet.’ I let her carry me into the race. As we started heading down the backside a couple of us started drifting away. She was traveling comfortably, within herself. I let her creep into the race in her own time. Then when we started to come down the back the inside started opening up. I had so many people tell me, ‘don’t go near the inside.’ So I just let her naturally take me around the outside. When we were coming around the home turn I was like, ‘come on girl, let’s get into it.’ She really exploded for me. She gave me everything she’s got…

When she came upside of Guarana she matched her, she put her head down and she was game on all the way to the wire. She never gave up. She’s so tough. What an amazing filly. She’s come out here today and really proved how good she is. She deserves to be at these Grade I races.”

Street Band romped at second asking sprinting at Ellis last September, but went winless in her next three outings before taking a two-turn Fair Grounds optional claimer by a nose in January. She was fourth behind eventual GI Kentucky Oaks heroine and fellow Cotillion competitor Serengeti Empress (Alternation) in the GII Rachel Alexandra S. back in New Orleans in February, and belied 10-1 odds when a clear-cut winner of the GII Fair Grounds Oaks Mar. 23. The chestnut crossed the wire seventh–moved up to sixth by the stewards–with a less-than-perfect trip in the May 3 Kentucky Oaks, but resurfaced and returned to her best to cruise in the GIII Indiana Oaks July 13.

“The biggest thing about this family is that it matures late,” said trainer Larry Jones, who took the 2015 Cotillion with I’m a Chatterbox (Munnings). “I had the whole family and we have not been in a super hurry with her. The only time we really pushed her was at Fair Grounds and see if we could get her ready for the [Kentucky] Oaks. And then we could call it the way we would want it and pick our spots… we will see and give her off a little bit to [the Breeders’ Cup at] Santa Anita.”

Jones continued, “I trained her mother and she had six foals. Before this one and they ask why do I keep this mare? And I said it was one of the fastest horses I have ever trained. I had her at the same time I had [GISW] Hard Spun. She was as fast as Hard Spun and would outwork him sometimes, but it took a long time to prove it.”

Street Band marks the first Grade I winner for her sire Istan, whose eight other stakes winners include graded winners Albano, Mr. Bowling, Istanford and Turkish. The Gone West stallion currently stands in Saudi Arabia. Street Band has a juvenile full-sister named Street Missy, who worked Sept. 16 at Churchill. Her dam had foals the last two years by Summer Front, including a colt who sold Monday at Keeneland September for $100,000. Street Band’s granddam won the 1987 GI Selima S. and was bred to Street Cry (Ire) to produce Street Band’s dam. Street Cry was a grandson of Mr. Prospector, as is Istan, making Street Band inbred 3×4 to the late leading stallion. Street Cry has sired a plethora of good horses, but is also making his impact felt as a broodmare sire with 57 stakes winners to date out of his daughters.