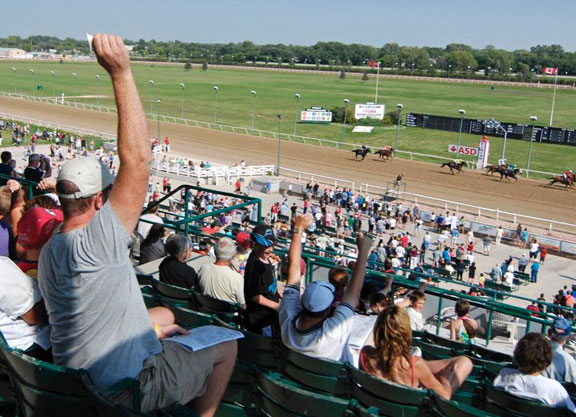 The first race on July 25 at Assiniboia Downs stood out like no other at the Winnipeg track this season: The four-horse stakes–in which one individual had an ownership interest in three of the starters via two separate partnerships–featured two of those horses being put under tight holds and fighting their riders straight from the starting gate. The third uncoupled stablemate coasted to a clear lead and a 5 3/4-length victory as the 1-20 favorite.

During the race, the Assiniboia announcer noted how “heavily restrained” one of those horses was while the other veered extremely wide through a “snoozer” of a first quarter mile in :25.60. After the race, a posting on the track’s website revealed that regulators had received “a long list” of complaints about the way the $27,500 Winnipeg Sun S. was run.

That list got even longer 72 hours later when Tadaa (Going Commando), the 16-1 filly who was wrangled back to last then finished third, beaten 17 lengths, roared back to her usual front-running form. On July 28 she annihilated an Assiniboia allowance field by 10 1/2 lengths as the 3-5 favorite, winning “with something left” according to the Equibase chart.

But if any in-depth examination of that July 25 stakes is in the works, the Assiniboia stewards aren’t willing to confirm or speak about it. In fact, the only adjudicatory action to come out of the incident so far has been a vaguely worded, little-publicized stewards’ ruling that revoked a jockey’s license without stating a reason why or declaring him to be in any violation of the rules.

It’s unlikely that betting was the prime motivator for anyone who allegedly orchestrated the tactics in the Winnipeg Sun S., because the winner, Escape Clause (Going Commando), went off at 1-20 odds and figured on paper as the solid favorite without any help. But whether or not there was an attempt to make sure the “right” horse won a stakes without pressure while another was kept fresh for a race 72 hours later are among the legitimate questions the MHRC should be asking.

The blame, at least for now, appears to be falling solely on jockey Rohan Singh. He rode Tadaa in those two polarizing performances three days apart in late July, but has not set foot in a stirrup at Assiniboia since that filly’s audacious comeback win.

MHRC executive director Larry Huber wrote in an Aug. 14 email to TDN that Singh had met with the Assiniboia stewards and “volunteered” to give up his riding license when questioned about his rides aboard Tadaa.

Huber then provided a stewards’ ruling that stated “Jockey Rohan Singh’s 2018 Manitoba Horse Racing Commission license is hereby rescinded. Mr. Singh must appear before the Stewards before being considered for re-licensing with the MHRC.”

There was no mention in that ruling of the circumstances surrounding Singh’s loss of license. The MHRC, which has consistently posted other Assiniboia stewards’ rulings on its website all meet long, as of this writing has still not posted Singh’s ruling alongside all the others, even though it was dated July 31. If any penalties or sanctions are supposed to be in effect, they are not being honored in reciprocal fashion by regulators at Louisiana Downs, where Singh has been riding since Aug. 7.

Over the past week, Huber has not responded to multiple follow-up voicemail and email requests for comment sent by TDN. The three Assiniboia stewards–Brian Palaniuk, Grant Buckoski and Gary Flaman–also did not respond to individual emails seeking comment. Is their reluctance to speak related to a possible conflict of interest within the MHRC itself that could be hindering a fully objective and independent investigation?

Barry Arnason is the owner-in-partnership of the winner and the two alleged non-triers in the Winnipeg Sun S.

His brother, Brett Arnason, is the chairman of the MHRC.

The Arnason family has had decades-long, multi-generation involvement in Manitoba racing. It’s not unusual in racing jurisdictions both large and small to see regulators who are either active racing participants themselves or are related to current licensees.

Reached by phone on Thursday, Brett Arnason said he was aware of the stewards’ investigation into the July 25 and July 28 races. But he emphasized that as the commission’s chairman, he is not involved in any day-to-day policing or regulatory activities at Assiniboia.

“You’ve seen the race enough times–it was awful. And it made it even worse when [Tadaa] came back and won,” Brett Arnason said. “[Singh’s ride] was one of the worst rides I’ve ever seen..It was considered an extremely bad ride and poor judgment…. He just decided to pack up and leave rather than have an investigation, so he’s gone. There was no real violation, but upon further investigation, if he had stuck around, there might have been a ruling [that stated a specific rules violation].”

And what about the similar under-restraint ride by leading rider Antonio Whitehall aboard Amaretto (Going Commando)?

“From what I could see, that horse was just so outclassed. He just sat on her all the way around,” Brett Arnason said, at first not recalling that horse. He later added, “But maybe I should watch it again, and look at Amaretto.”

When asked whether the fact that his brother owns three of the four horses in that July 25 race presents a conflict of interest in adjudicating the case, Brett Arnason said it does not.

“The conflict of interest is eliminated, because any investigation that would go on, I would recuse myself from it,” Brett Arnason said. “I know maybe one of the stewards personally. The rest of them I don’t know. I have nothing to do with hiring them…. I rarely even go to the races, maybe twice a year. I used to train horses, but I try to stay out of it, so that at least if I’m called, I don’t have a bias.”

But could the chairman’s position of power with the MHRC implicitly affect how investigators would go about their duty considering his brother, the meet’s current leading owner, is an involved party? Would it inhibit them from asking the tough, but necessary questions about whether or not the jockeys were riding as instructed?

“I would hope not. There’s always a potential for somebody to feel like he has an obligation or a duty to protect my brother, but I can’t imagine that would be the case,” Brett Arnason said. “The position of the racing commission is to protect the public so they don’t get cheated by people that are abusing the rules.”

Escape Clause, Tadaa and Amaretto–the 1-3-4 finishers from the Winnipeg Sun S.–will all be back in action in the first race at Assiniboia Saturday night. That race is the $25,000 Distaff S. for Manitoba-breds, and this time they are the only three entrants.