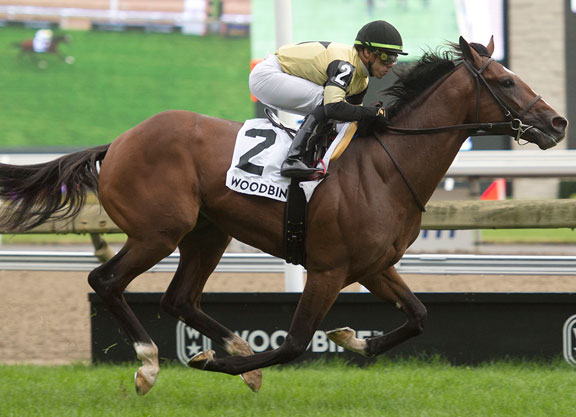 Decorated Invader, bet hard throughout, backed up his support and overcame a slow pace to capture the GI Summer S. Sunday at Woodbine, a “Win and You’re In” race for the GI Breeders’ Cup Juvenile Turf.

Showing a strong late kick to be second debuting July 13 at Saratoga, the $200,000 Keeneland September grad won geared down there next out Aug. 10 and was crushed down to even-money from a 9-2 morning line early in the wagering here before drifting up to fractional second favoritism by post.

Away a step slowly, the West Point Thoroughbreds colorbearer tugged his way up a few spots into seventh as huge longshot Cadet Connelly went on with it through pedestrian splits of :24.26 and :48.43 over yielding turf. Switched into the two path by Irad Ortiz, Jr. nearing the bend into the turn, he angled four deep and bore out a bit making the corner for home. Drawing alongside the pacesetter outside the eighth pole, the blaze-faced bay took charge soon after and kicked clear under mild urging to a convincing success. Cadet Connelly held bravely between third-running European shipper Vitalogy (GB) (No Nay Never) to his outside and longshot Proven Strategies (Sky Mesa) on his left to secure second in a three-way photo.

“We were just looking for him to relax in the first part of the race and then let him run in the end,” said Ortiz. “We know he can run so we just want to relax him and teach him the first part. He’s only had three races so I think he’s getting better and better. Today, I really liked the way he did it. He was floating in a little bit in the stretch, he always does, but hopefully he learns and if he just keeps a little more straight in the stretch that would be great. He keeps learning.”

Pedigree Notes:
With the victory, Decorated Invader becomes the 22nd stakes winner and 11th graded/group stakes winner for third-crop sire Declaration of War, who stood the 2019 season at the Japan Bloodhorse Breeders’ Association’s Shizunai Stallion Station in Hokkaido, Japan. He is also Declaration of War’s third Grade I/Group 1 winner, and his first top-level scorer in America, following up Australia’s G1 BRC Queensland Oaks heroine Winning Ways (Aus) and France’s G1 French 2000 Guineas victor Olmedo (Fr). He is the second black-type winner for 16-year-old Gamely Girl, who scored by four lengths at odds-on over the local main track in 2006 in her only outing before selling for $450,000 the following fall at Keeneland November. She foaled a colt by Violence Mar. 9 before visiting Distorted Humor. Third dam Hail Atlantis was a GISW who produced the long-productive turf sire Stormy Atlantic (Storm Cat).