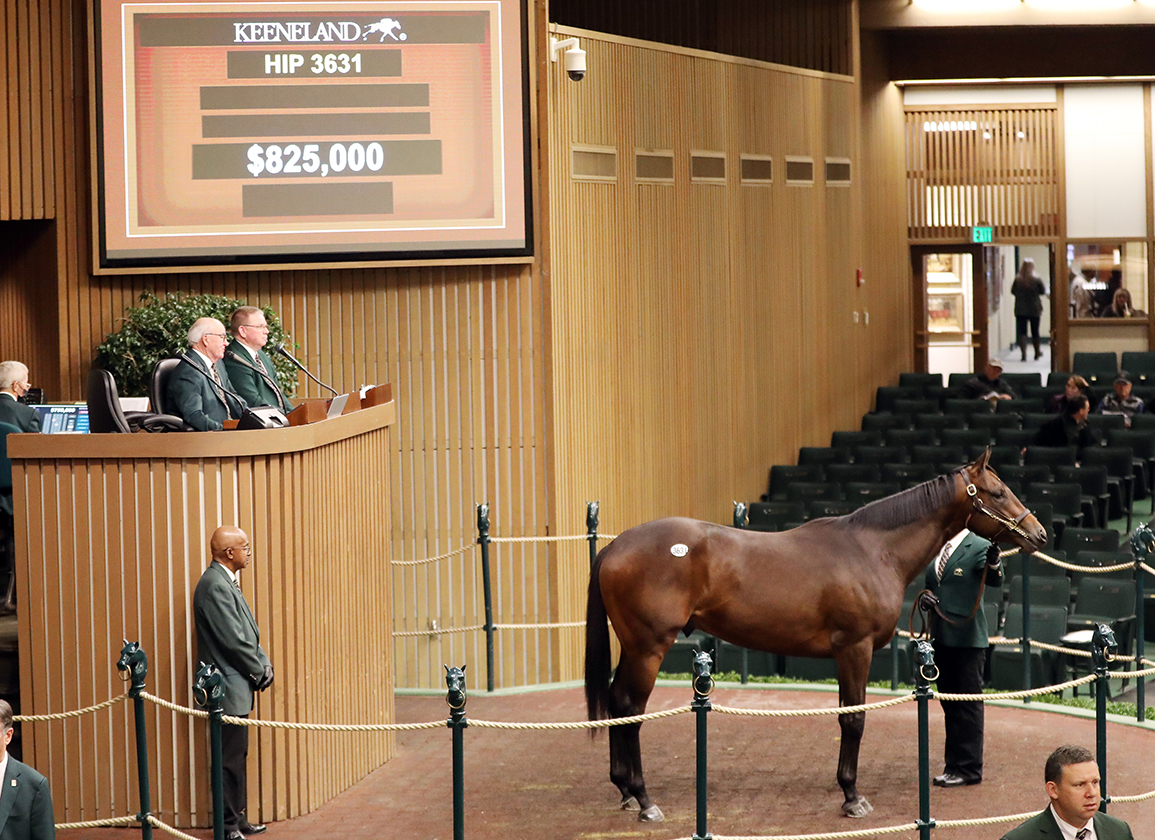 Strava, a promising juvenile colt by super sire Into Mischief, topped Friday's 10th and final session of the Keeneland November Sale, bringing $825,000 from legendary University of Louisville basketball Denny Crum. Consignor and part-owner WinStar Farm stayed in for half.

There were 435 horses catalogued for Friday's session with the first 148 being broodmares and weanlings and the remaining 287 comprised of active racehorses. This was the first time the horse of racing age portion was consolidated into a single and final session.

WinStar Racing led all consignors during the final session, selling 22 racehorses for $2,456,500 and an average of $113,932. Their consignment accounted for three of the top five sellers and six of the top 11, including three for Juddmonte. Elite was second with 21 head bringing $1,707,000. They represented four of the top 12.

The red-hot Into Mischief was the day's leading sire, with seven of his offspring selling for $1,163,000.

Crum Gets in the Game for Strava

Denny Crum, who put together a Hall of Fame career as the basketball coach for the University of Louisville, has been in the racing industry on and off over the years. However, he made a big splash at Keeneland November Friday when purchasing the promising juvenile colt Strava (Into Mischief) (Hip 3631) for $825,000 during the Horses of Racing Age Portion.

WinStar Farm, which bred, consigned and co-owned the colt with Siena Farm, stayed in for 50%. Strava will be returned to the care of trainer Dallas Stewart, who bid on Crum's behalf.

“He's had horses off and on,” Stewart said. “He's got a piece of another 2-year-old. He's been in the game a long time. He knows the ups and the downs. He has won a lot at the buzzer and he has lost a lot at the buzzer, so he knows what's going on.”

The conditioner continued, “It is hard to find the good ones. People are always like, 'When you find a good one let me know.' I was at a fish fry last night. I started talking to him about this colt and said, 'Do you want to go to the sale?' He said, 'Sure.' I showed him the race when he won at Keeneland. I was so impressed. We took the ride over there and he bought half of him and WinStar stayed in for half.”

Kenny Troutt's operation purchased the colt's dam SW & GISP Catch My Drift (Pioneerof the Nile) for $400,000 at the 2015 KEENOV sale. A $275,000 RNA at KEESEP, Strava won on debut for Stewart, WinStar and Siena Farm going six panels at Keeneland Oct. 9.

As for future plans for Strava, Stewart said, “He has been over at the sale a couple of days. You kind of back off of them a little bit going into the sale. He should be back at Churchill this afternoon. We will just ease him back into the training. We will put a campaign together for him later on. He will go back to the Fair Grounds this winter.”

Stewart and Crum have had success together before, most notably with a mare named Nasty Storm (Gulch). She won three graded events and placed in a pair of Grade Is before selling to Frank Stronach for $1.075 million at the 2002 KEENOV sale.

“We have had a couple horses together,” Stewart said. “We had one really, really nice filly named Nasty Storm. She was a graded stakes winner and we sold her for a lot of money to Mr. Stronach. We had a lot of fun with her.”