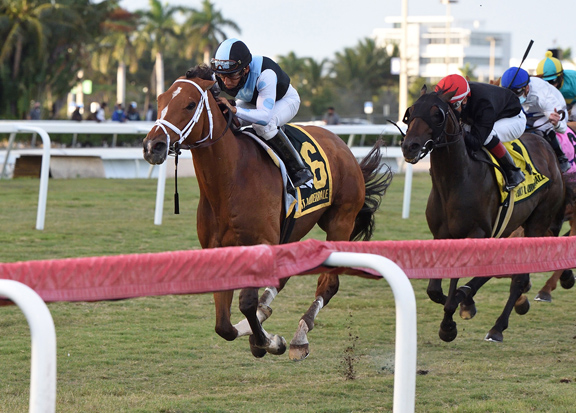 Sent off at odds of 16-1 as the lesser-fancied of a pair from trainer Todd Pletcher in Saturday's GII Ft. Lauderdale S., Largent (Into Mischief) settled in the latter half of the field and took advantage of a fast pace up ahead of him to cause the upset and likely earn a spot in the field for the $1-million GI Pegasus World Cup Turf next month.

Largent landed behind midfield as Halladay (War Front) set a searching pace in advance of the fleet-footed Factor This (The Factor) with the equally quick Somelikeithotbrown (Big Brown) outfooted in third. Racing inside down the backstretch, Largent was full of run, but was patiently handled into the final three furlongs by Paco Lopez. Sensing a chance to get away from the fence when push came to shove, Largent was produced four or five wide into the lane and finished fastest of all for the victory.

Pletcher continued, “He's a horse that has shown some talent. This was definitely his toughest task to date but he showed that he likes it here and delivered a big performance. I think he certainly ran well enough today to earn a spot into the Pegasus, which we'd love to do.”

Another weekend, another stakes winner for Into Mischief. North America's leading sire has 83 career black-type winners from nine crops, but the truly remarkable statistic is 29 of his runners are stakes winners of 2020. Among his 34 lifetime graded winners are this year's GI Kentucky Derby and GI Breeders' Cup Classic winner Authentic, GI Breeders' Cup Filly & Mare Sprint winner Gamine, and his newest graded winner, Largent. Largent is the last foal out of the late Life in Seattle, whose three stakes performers also included MSW & GSP Kona Blend (Dixieland Band) and MSP Edgewater (Lion Heart). Life in Seattle won half of her four career starts and was out of the $1.9-million KEENOV broodmare Life At the Top, a MGISW and graded stakes producer. Life At the Top's dam was a half-sister to Eclipse champion and GI Kentucky Derby winner Bold Forbes (Irish Castle). Largent is bred on the identical cross as Into Mischief's dual champion Covfefe, as both are out of Unbridled mares. Unbridled's 87 stakes winners out of his daughters also include Canadian champion Spring in the Air (Spring At Last), Derby winner Orb (Malibu Moon), and GI Preakness winner Shackleford (Forestry). Unbridled's sire son, Unbridled's Song, accounts for the dams of three more of Into Mischief's black-type winners. An additional two of Into Mischief's stakes winners are by another Unbridled son, Empire Maker.